The struggling chip company bounced off lows, with some good news driving the stock higher.

What: Shares of Advanced Micro Devices (AMD 1.63%) soared 33.2% in March, according to data provided by S&P Global Market Intelligence. Various pieces of good news, including the company's announcement that its chips power the vast majority of the total addressable market for VR systems, drove the stock to bounce from deep lows carved out earlier in the year. 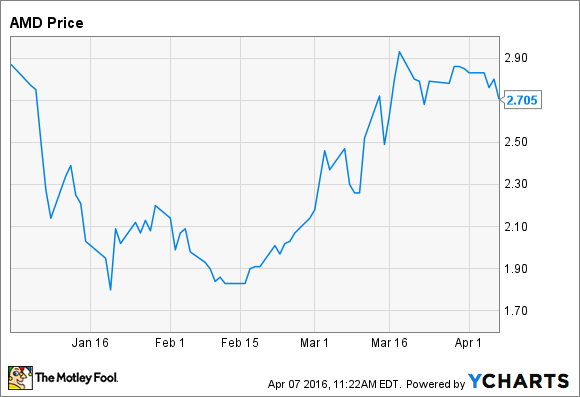 So what: On March 14, AMD touted its success in the VR market, pointing to data from Jon Peddie Research stating that its chips power 83% of dedicated VR systems. This number includes game consoles, and with AMD powering both the PlayStation 4 and the Xbox One, its high market share shouldn't come as a surprise. Sony plans to launch its PlayStation VR headset in October.

On March 16, a rumor that Intel was interested in licensing AMD's graphics patents sent shares higher. Intel currently pays AMD rival NVIDIA annual payments as part of a cross-licensing deal, but with that deal set to expire next year, there may be an opening for AMD. This rumor was never confirmed, but shares of AMD jumped regardless.

On March 18, reports surfaced that Sony planned to launch an upgraded version of its PlayStation 4 gaming console capable of handling 4K gaming. The new console would require an improved GPU, supplied by AMD, raising the possibility that AMD's semi-custom segment could get an unexpected boost in revenue.

Now what: With shares of AMD tumbling in January, it only took a few pieces of good news to send shares soaring in March. 2016 is an important year for AMD, with the launch of its new Polaris GPUs and its new Zen CPUs set for later this year. AMD will need to win back share in both the GPU and the CPU markets in order to turn around its business. During 2015, the company posted a massive $660 million net loss. It will ultimately take more than a few rumors to drive AMD's stock price higher in the long run.