It's all about profit growth.

What: Apparel retailer and apparel maker Guess? (GES 4.53%) saw its stock decline 12% in March, according to data provided by S&P Global Market Intelligence. 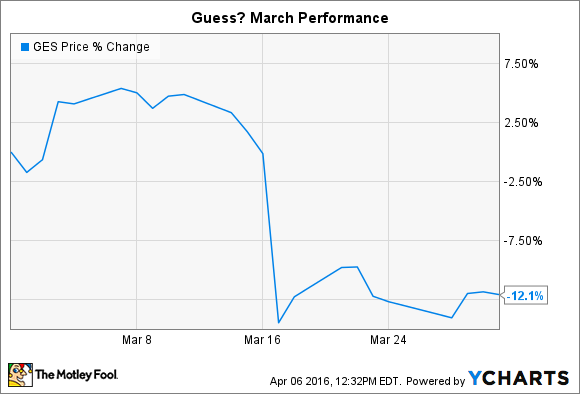 Shares rose sharply in February -- and even touched a 52-week high -- but took a step back last month after the company announced disappointing fourth-quarter results.

So what: Sales in the holiday quarter fell 6% worldwide as Guess? enjoyed solid demand growth in Europe and steady gains in the U.S., but posted a near 20% sales decline in Asia. Profitability declined, with gross margin shrinking by a full percentage point to 36.5% of sales. That weakness was the key reason why earnings slipped 10% to $0.57 per share.

"There is still more work to be done, but I am convinced that the initiatives we have started to implement in the last few months have contributed to these encouraging results," CEO Victor Herrero said in a press release.

Now what: While Wall street was projecting slightly higher profits last quarter, the real issue was the weak earnings guidance Guess? gave for fiscal 2016. Management forecasts that operating margins will sink to as low as -5% next quarter before rebounding to just 4.5% for the full year.

The good news is that the company should log significant sales growth this year thanks to contributions from a booming e-commerce business, a growing store base, and steady revenue gains at existing locations. Meanwhile, Herrero's long-term target still calls for hitting an impressive 7.5% operating margin over the next three fiscal years, even if 2016 will mark a step back from that goal.

Ultimately, investors didn't find a lot of evidence to support that long-term profitability target in the latest operating results, and so Guess?' stock declined to account for the slowing earnings growth profile.