What: March had to feel good for investors in EP Energy (EPE). That's after the beaten-down oil and gas producer more than doubled last month: 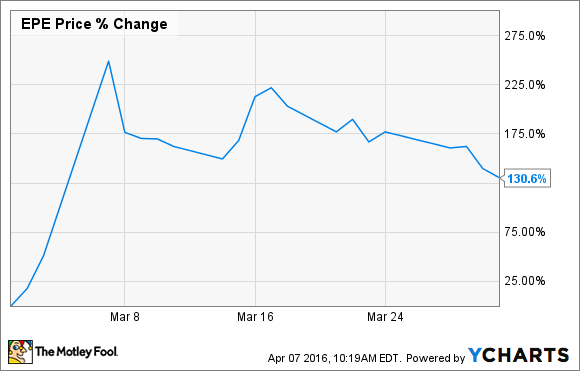 That's despite the fact that it was downgraded three times. Instead, its rise was fueled by an oil price inspired short-squeeze and an asset sale that bolstered its balance sheet.

So what: Oil enjoyed its best month in a year, jumping 14%. Fueling crude's rise were a number of reports that OPEC and Russia were inching closer to sealing a deal to freeze their production. While that's not the output cut that the market would like to see, it's at least a step in the right direction because it should help the market begin to work off its glut of oil in storage.

This news not only ignited the price of crude, but it launched an epic short squeeze in the energy sector. Heavily shorted stocks like EP Energy and Chesapeake Energy (CHKA.Q), which still had a remarkable 21% and 39%, respectably, of their float sold short as of March 15, took off last month after short-sellers ran to cover their positions. In fact, EP Energy's shorted share count fell from 13.6 million in mid-February to 13.4 million by mid-March while Chesapeake Energy's fell from 204.4 million to 199.9 million over that same time-frame.

Another big fuel for both stocks last month was progress on asset sales. While Chesapeake Energy was only reportedly making progress on a key asset sale, EP Energy actually sealed a deal last month, netting $420 million for its assets in the Haynesville and Bossier shale plays. It's a move that improved the company's financial footing tremendously.

That being said, analysts still said that the company faces a huge uphill battle which is why not one, but three of them downgraded the stock last month. Bank of America cut it to underperform from neutral, while reducing its price target from $3.50 to $3 citing remaining balance sheet headwinds despite the aforementioned asset sale. Prior to that Goldman Sachs downgraded it to a sell from neutral, warning that it will be in trouble when its hedges roll off later this year. Credit Suisse, meanwhile, downgraded it from outperform to neutral, citing both its balance sheet woes and the impending roll off of its hedges.

Now what: Analysts clearly think that EP Energy has gone too far too fast. They see a company that is running up against a serious cash flow drop once its oil and gas hedges roll off. That will put it in an even tighter spot to maintain its elevated debt levels, meaning that the company needs to sell even more assets as well as see oil and gas prices spike before it will again be on solid ground.

EP Energy Corp.'s Stock Is Getting Rocked by an Exchange Offer