Please ensure Javascript is enabled for purposes of website accessibility
Log In Help Join The Motley Fool
Free Article Join Over 1 Million Premium Members And Get More In-Depth Stock Guidance and Research
By Daniel B. Kline - Apr 8, 2016 at 10:04PM

Royal Caribbean Cruise Lines (RCL 4.79%) navigates some bumpy waters in March, which saw its stock bob around like storm swells before settling in with a big gain. 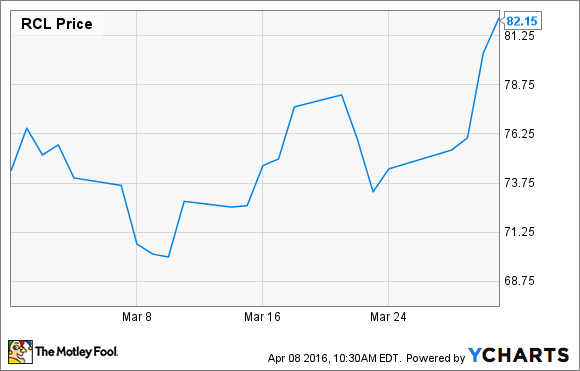 What: Following a very strong earning reports in early February, the company had to deal with fallout from the March 22 terrorist attack in Brussels, which briefly caused a market pullback on certain travel-industry stocks. The company was able to fight back those concerns and after closing on Feb. 29 at $74.37 it finished March at $82.15 a nearly 10.5% increase, according to data provided by S&P Global Market Intelligence.

So what:  Global travel organizations will always be susceptible to disruption from wars, terrorist attacks, and other events outside their control. In this case the Brussels attack was a cause for concern as it did like to Royal Caribbean cancelling at least one cruise. COO Adam Goldstein was quick to address the issue in a March 23 appearance on FOX Business:

We put a lot of effort into security. We work with law enforcement all over world. We are calling on about 500 ports around the world annually and we make judgments about the information we are receiving and occasionally, not often, but occasionally, we decide based on what we know that it would not be in the best interest of the line or the guests to go to a place.

But just because this happens every now and then does mean Goldstein sees a major problem. "We might see some impact from people living in Northern Europe. I think we saw the briefly after the Paris attacks, unfortunately, but the world moves on," he said. "This is a world where people want to take vacations, they want to enjoy themselves."

Now what: Barring any further events beyond its control, Royal Caribbean should continue to see its stock price climb because its business has been healthy.

"Our core brands are firing on all cylinders, our new ships are performing exceptionally well and our costs are well controlled.  This is driving 40%+ earnings growth in two consecutive years," said CEO Richard D. Fain in the company's most recent earnings report.

Going forward the company has very high hopes for 2016. It reported that its bookings for the coming year are roughly equal to last year's record numbers, but at higher rates. That bodes well for continued gains in share price even if it's sometimes a bumpy ride due to global events.