Please ensure Javascript is enabled for purposes of website accessibility
Log In Help Join The Motley Fool
Free Article Join Over 1 Million Premium Members And Get More In-Depth Stock Guidance and Research
By Lee Samaha - Apr 9, 2016 at 9:12AM

Other cyclical stocks have been strong lately, but will the railroads climb after they report results? Here's what could signal that move.

CSX Corp. (CSX 1.70%) will present its first-quarter results in mid-April, followed by fellow railroad company Union Pacific Corporation (UNP 1.78%) a week later. Both sets of results are eagerly anticipated, not least because the transportation sector is viewed as a leading economic indicator. While the reports will likely have lots of useful data points, investors should keep an eye on one key metric when both companies give results -- a piece of information that could indicate the start of a recovery in industrial conditions.

Some sectors are more equal than others
Let's face facts: It isn't going to be a pretty report from either company. Analysts expect to see CSX's revenue decline by 11.5% to $2.68 billion, with EPS falling 17.8% to $0.37. Meanwhile, the investment community anticipates Union Pacific's revenue dipping by 11.7%, and EPS declining 12.3% to $1.14.

Moreover, a look at U.S. industrial conditions -- measured here by the Institute for Supply Management Purchasing Managers Index, where a figure above 50 indicates expansion -- and U.S. coal production (a key end market for railroads) indicate weakness in 2016. 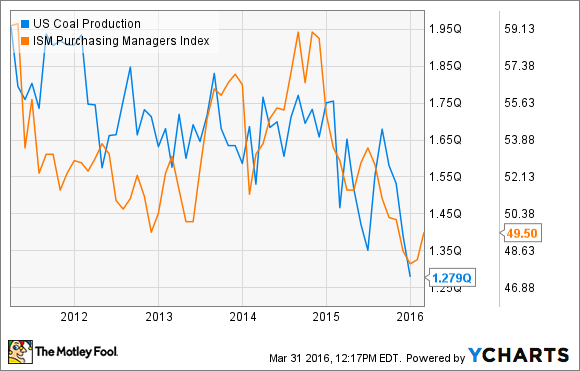 US Coal Production data by YCharts.

The question is whether the results will reveal a beginning of a bottoming in conditions.

If it's stronger, you could argue that a bottom is forming -- even if the year-over-year numbers are weaker -- while weaker sequential numbers would indicate worsening conditions. 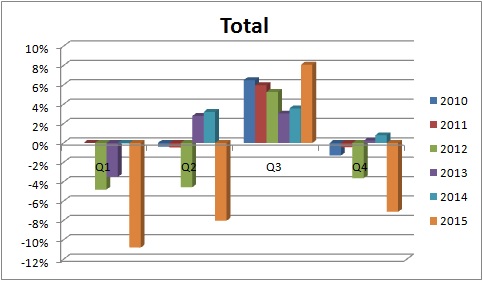 But what should we expect from the first quarter of 2016?

It's useful to strip out coal from the figures in order to get a better cyclical viewpoint -- coal has structural as well as macroeconomic issues facing it. Here's a chart of sequential growth for Union Pacific revenue ton miles ex-coal: 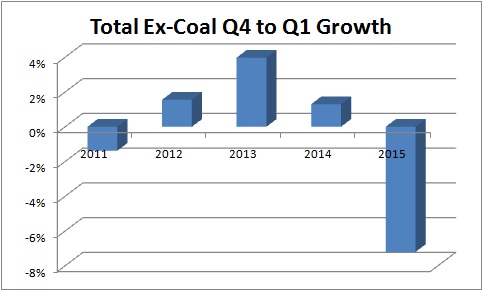 Extrapolating from the chart above, any sequential growth in the first quarter would suggest some relative improvement. For reference, total fourth-quarter revenue ton miles were 116,718 million, and excluding coal they were 80,765 million. Therefore, any figure around that amount in the first quarter could be seen as a positive.

CSX Corp.
The patterns in CSX's volumes are similar to Union Pacific's. For example, a breakout of total unit volumes, coal unit volumes and intermodal (purely for comparison) shows its weakness in the first quarter of 2015. 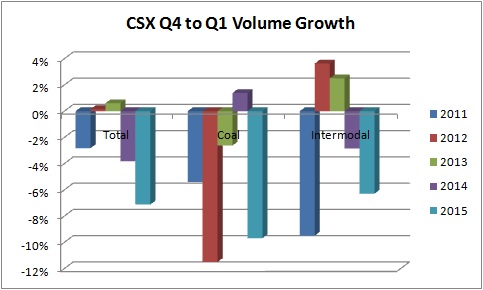 It's clear that when the economy is firing on all cylinders, CSX's first-quarter volumes excluding coal can grow on a sequential basis. It's probably too early to expect a positive result in the coming quarterly report, but investors will want to see some signs of a bottom forming.

Where next for Union Pacific and CSX?
Some other cyclical sectors in the market, such as industrial supply, have been flying high in 2016, with the market apparently pricing in a second-half recovery in U.S. industrial conditions. In addition, energy-related industrials have also been strong lately -- and railroads have heavy exposure to the energy industry.

With this in mind, the index-hugging performances of CSX and Union Pacific have been relatively disappointing -- though understandable, given the lack of hard evidence of a turnaround in their carload volume trends. 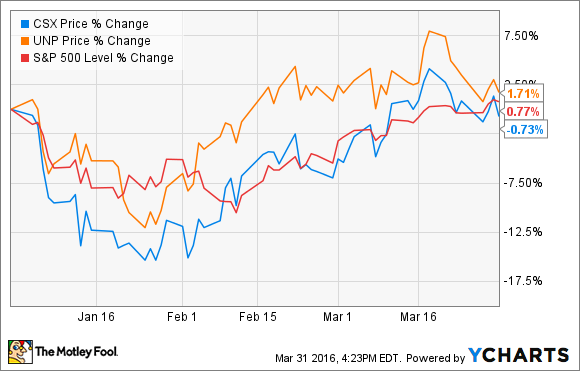 On the other hand, if CSX and Union Pacific report better sequential growth -- in line with the indicators discussed above -- then don't be surprised if the stocks move higher. Under the circumstances, it's hard to expect too much from this month's results, but any solid or anecdotal evidence in their presentations of a bottoming process will likely send these stocks higher.