Please ensure Javascript is enabled for purposes of website accessibility
Log In Help Join The Motley Fool
Free Article Join Over 1 Million Premium Members And Get More In-Depth Stock Guidance and Research
By Daniel Miller - Apr 9, 2016 at 9:03AM

Despite a solid quarter from CarMax, investors apparently weren't thrilled with slowing comparable-store sales and gross profit per used unit.

While we faced a somewhat more challenging sales environment in the second half of the year, we delivered solid revenue and EPS growth in both the fourth quarter and the fiscal year, we opened a record number of stores and we made progress toward optimizing our capital structure by buying back 16.3 million shares in fiscal 2016.

Sure, CarMax posted a solid quarter and full year, but at some point, every company faces the reality that growth will slow and investors won't like it. Let's take a look at the top- and bottom-line results, as well as what parts of the business showed some weakness.

One thing that didn't sit well with investors was CarMax's slowdown in same-store sales during the back half of the year. Consider that for the full year, comparable-store sales were up 2.4%, but in the fourth quarter, that figure was only a 0.7% improvement compared to the prior year. For more context surrounding the full year's 2.4% growth, here's a long-term look at CarMax's same-store sales growth: 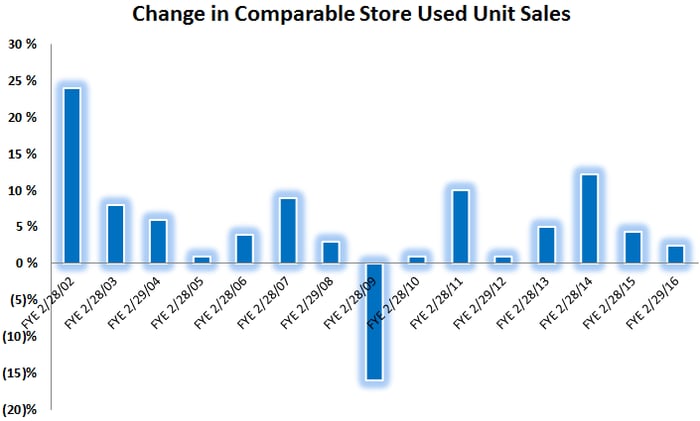 Another factor for investors to look at was CarMax's SG&A expenses. Obviously, as store expansion is a large focus for the company, investors can expect SG&A expenses to rise accordingly because those new stores require more marketing and advertising expenses, and they aren't as efficient in store operations. Mostly thanks to CarMax's 10% increase in its store base since the beginning of last year's fourth quarter -- or 15 new stores -- its SG&A expenses increased 1.2% to $333.9 million in the fourth quarter. That increase in expense looks better than investors would think given the 10% increase in store count, because some of it was offset by a $14.2 million decrease in share-based compensation expense.

Also, looking at value returned to shareholders, CarMax repurchased 3.0 million shares of common stock during the fourth quarter, which brings the total to 16.3 million shares for $971.2 million during the fiscal year. At the end of the fourth quarter, Feb. 29, 2016, CarMax had $1.4 billion remaining available for repurchase under its current program.

Was CarMax's fourth-quarter result bad? That depends on the perspective of the investor. Yes, there was increasing pressure on CarMax's used-vehicle average gross profit, but that remains near historical highs. Yes, comparable-store sales slowed during the second half and SG&A expenses moved higher, but its overall growth story remains intact. Investors would be wise to keep an eye on how CarMax plans to fuel same-store sales through improved storefronts or providing more services online.