Please ensure Javascript is enabled for purposes of website accessibility
Log In Help Join The Motley Fool
Free Article Join Over 1 Million Premium Members And Get More In-Depth Stock Guidance and Research
By Brian Feroldi - Apr 9, 2016 at 9:43AM

News of a new date for an advisory committee meeting has put traders in a good mood.

Image by Unsplash via pixabay 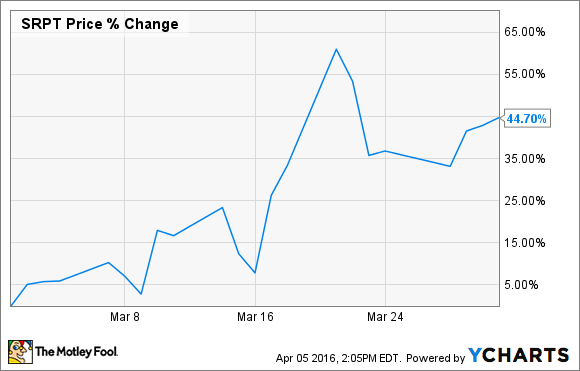 So what: A handful of news announcements look responsible for last month's gains:

Now what: It's tough to predict what kind of response the committee will have for eteplirsen. On the one hand, documents released by the FDA ahead of the drug's prior advisory committee meeting were quite harsh. On the other hand, eteplirsen has been granted Priority Review status, there are no adequate therapy options for DMD, and patient and provider support is huge -- meaning the committee might be willing to be more flexible.

Companies that make drugs aimed at treating DMD haven't had any luck the with FDA at all. Case in point: BioMarin's (BMRN 0.31%)  Kyndrisa was outright rejected by the FDA a few months back. BioMarin has since turned its efforts toward getting Kyndrisa approval in Europe, but given the FDA's rebuke, the approval seems unlikely.

In addition, PTC Therapeutics (PTCT 3.85%) received a "refuse-to-file" letter from the FDA for its DMD treatment Translarna. The agency stated that the application wasn't complete enough for the FDA to conduct a full review. That came as a bit of a shock to PTC Therapeutics, as Translarna had already sailed through the regulatory approval process in Europe.

Given the extreme uncertainty surrounding Sarepta's near-term future, I have a hard time being even remotely interested in purchasing shares. For those who are interested, it probably makes sense to watch how the advisory committee meeting plays out before you consider investing.

Brian Feroldi has no position in any stocks mentioned. The Motley Fool recommends BioMarin Pharmaceutical. Try any of our Foolish newsletter services free for 30 days. We Fools may not all hold the same opinions, but we all believe that considering a diverse range of insights makes us better investors. The Motley Fool has a disclosure policy.