Please ensure Javascript is enabled for purposes of website accessibility
Log In Help Join The Motley Fool
Free Article Join Over 1 Million Premium Members And Get More In-Depth Stock Guidance and Research
By Joe Tenebruso - Apr 9, 2016 at 8:27AM

The retailer's recent struggles may point to greater trouble ahead.

What: Shares of Sears Holdings (SHLDQ) fell 12.4% last month, according to data provided by S&P Global Market Intelligence. The beleaguered retailer has seen its sales and profits plummet amid a perfect storm of intense competition, rising costs, and difficulty in obtaining financing at attractive rates.

So what: In a letter accompanying Sears' fourth-quarter earnings release, Chairman Eddie Lampert highlighted the toll that online commerce and other disruptive threats have taken on traditional retailers. In addition, Sears, like many large retailers, is being negatively affected by recent minimum wage increases. Compounding the problem is the fact that Sears is finding it increasingly difficult to raise capital at favorable interest rates. This is at a time when less proven and unprofitable businesses such as Uber are rewarded with "almost unlimited capital" by investors, Lampert wrote.

Management believes Sears' mobile and membership initiatives will help to right the ship by improving the company's "integrated retail" shopping experience. Investors, however, appear unconvinced, with Sears' March swoon extending a 65% fall in the company's stock price over the past year. 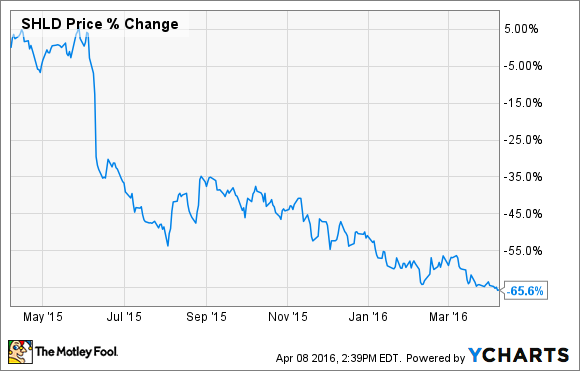 Now what: It appears unlikely that Sears' integrated retail strategy will be enough to stem the decline in the company's sales and profits. In the fourth quarter alone, Sears lost $580 million -- or $5.44 per share -- as its same-store sales plunged 7.1%. That's a huge loss for a business with a $1.5 billion market cap and dwindling cash reserves. Combined with a massively underfunded pension plan and the likelihood of more losses ahead, this embattled retailer appears to be moving closer towards bankruptcy every passing day.