Please ensure Javascript is enabled for purposes of website accessibility
Log In Help Join The Motley Fool
Free Article Join Over 1 Million Premium Members And Get More In-Depth Stock Guidance and Research
By Tim Brugger - Apr 10, 2016 at 7:20AM

The search king prepares to move beyond low-cost cloud hosting and enter the data analytics market.

The market for cloud services is expected to skyrocket in the years ahead. With hundreds of billions of dollars at stake, industry leaders including Microsoft (MSFT 1.29%), IBM (IBM 1.86%), and Alphabet (GOOG 2.32%) (GOOGL 1.88%) are going all-in to capture their fair share of the cloud revenue pie. Alphabet has taken a different path than its tech brethren in the cloud market, but it appears that's about to change.

Until recently, Alphabet seemed content to focus its cloud efforts on data hosting, or Infrastructure-as-a-Service (IaaS). Not a bad plan given that the amount of data amassed in today's digital world is unparalleled and is expected to continue growing as consumers become more connected. But even at this early stage of the cloud, data hosting has become a commodity. The real opportunity lies in cloud-based Software-as-a-Service (SaaS) and data analytics solutions, which Alphabet is beginning to address. 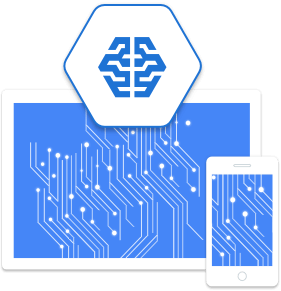 A step in the right direction
Alphabet's Google recently opened the doors of its cloud machine learning, or artificial intelligence (AI), product suite to select developers. The new platform is still in "limited preview," but it's a crucial step in expanding its cloud offerings beyond storage. Major Google apps already use its "cloud machine learning," including "Photos (image search), the Google app (voice search), Translate, and Inbox (Smart Reply)." And now the platform is available to businesses.

"We're on a journey to create applications that can see, hear and understand the world around them," Fausto Ibarra, director of product management at Google Cloud Platform, wrote in a blog post. "Cloud Machine Learning makes it easy for you to build sophisticated, large scale machine learning models in a short amount of time. It’s portable, fully managed and scalable."

The ability to tailor Google's cloud-based AI functionality to specific needs, not to mention improve upon its existing functionality, could prove to be a game changer. Not only will customers be able to shift data and resources offsite to the Google cloud, but enhanced AI capabilities translate to a one-stop shopping alternative, much like Microsoft and IBM offer. The question is, what's taken so long?

Alphabet is no stranger to AI, as evidenced by the recent "tweak" to its search algorithm to use what's called RankBrain. With little to no fanfare, Alphabet introduced AI-based search results last year, and as per a recent study, the results have been nothing short of spectacular. RankBrain is just one example of Alphabet employing AI to improve the user experience, and it's finally translating that futuristic technology to its cloud business.

Late to the game
IBM has spent over $5 billion on its cloud-based data analytics solutions -- driven by its Watson cognitive computing wonder -- and Microsoft CEO Satya Nadella's emphasis on the "cloud-first" pillar of his "mobile-first, cloud-first" initiatives is undeniable. Both efforts are paying off handsomely. IBM is already generating an annual run rate of $4.5 billion in cloud service sales, and Microsoft is leading the pack with more than $9.4 billion in annual cloud-related revenue.

Alphabet doesn't share cloud revenue details, but if last year and last quarter are indications, it's barely in the same ballpark as Microsoft or IBM. In Q4, Alphabet generated $2.1 billion in "other revenues," equal to about 10% of its $21.18 billion in total sales. Considering "other revenue" includes Google Play, Fiber, and assorted services in addition to cloud-related sales, that $2.1 billion barely moves the needle.

The problems are twofold: First, Alphabet's focus on data hosting hasn't exactly lit the market on fire. As of last year, Alphabet accounted for just an estimated 4% of the cloud IaaS market worldwide, largely because of its lack of data centers. As it stands, Alphabet has just three data centers around the world, but it has announced plans to build 12 more by the end of next year.

The other roadblock to Alphabet's cloud success has been its lack of an end-to-end, cloud product suite. Microsoft and IBM have data hosting platforms -- Azure and SoftLayer, respectively -- but those are simply a means to an end. Azure is a foundation for Microsoft to market its SaaS solutions, and SoftLayer is IBM's entree to its data crunching, artificial intelligence services. Hosting is nice, but providing clients with actionable results that improve over time thanks to AI is where the revenue opportunity lies.

Alphabet barely even registers on today's list of cloud providers. But incorporating AI into its cloud offerings, with the assistance of the world's developer community, could prove to be a watershed moment in Alphabet's already storied history.