Please ensure Javascript is enabled for purposes of website accessibility
Log In Help Join The Motley Fool
Free Article Join Over 1 Million Premium Members And Get More In-Depth Stock Guidance and Research
By Cheryl Swanson, Keith Speights, and Cory Renauer - Apr 12, 2016 at 8:10AM

Understanding the level of risk in a therapeutic pipeline leads to smarter investing. Our contributors tip you off on where to be wary, and what benchmarks to look for.

You no doubt already know that the strength of a big pharma's pipeline is a great indicator of its overall health. But have you ever realized that determining the amount of risk in a pipeline isn't that obvious?

That's because the risk in drug development is affected by a large variety of factors, each of which influences others. For example, some pipelines are risky because there aren't enough drugs in late-stage trials to replace those going off patent. Since there's no guarantee any individual drug will make it through the FDA gauntlet, it takes a reasonably large number of shots on goal to replace revenue lost to generic competition.

But having multiple shots on goal isn't always the answer. While having major drugs in late-stage trials is a big plus, if the pharma spreads its R&D bets too widely deeper in the pipeline, it risks losing focus. A pipeline aimed at a vast array of disease targets, only a few of which will ever come to fruition, will quickly exhaust the R&D budget.

You can't measure all these things in a heartbeat. But our contributors take a stab at analyzing three of big pharma's riskiest pipelines. As you'll notice, each evaluates risk using a different benchmark.

Cory Renauer: When GlaxoSmithKline's (GSK -1.22%) rambling "To R&D, or not to R&D" soliloquy ended with a $16 billion sale of oncology assets to Novartis, I thought the company was finished suffering the slings and arrows of clinical setbacks.

It seems shareholders didn't share CEO Sir Andrew Witty's dreams of slow, steady growth through branded consumer products, and soon he and Glaxo will part ways. He's leaving them with a terribly thin late-stage pipeline that earns my nomination for Big Pharma's riskiest, because even if all goes well, there could be losses ahead. 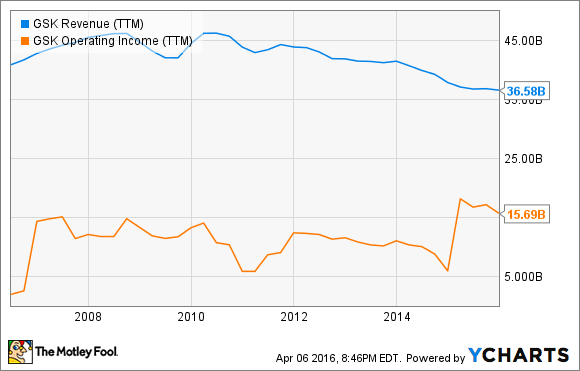 While Tivicay and Triumeq are performing well, Glaxo's lead HIV prospect in development is a combination of Tivicay and Johnson & Johnson's Edurant. If successful, Glaxo's share of profits will be relatively minor.

If you think the company Advair built would boast a strong respiratory-illness pipeline, think again. The most promising late-stage program is an attempt to expand Nucala's label from small group of asthma patients to a wider group of COPD patients. Perhaps a win here could help Glaxo recoup the massive amount of resources it's thrown at Nucala, but it will take far more to replace Advair losses, particularly since sales of newer respiratory drugs Breo and Anoro have thus far been sluggish.

One of the few new entities in phase 3 at Glaxo is shingles vaccine Shingrix. It performed well in phase 3, but Merck & Co.'s Zostavax is well entrenched. If it reaches optimistic peak annual sales estimates of $900 million, it just might keep Glaxo from posting losses in the years ahead.

That leaves another J&J-partnered therapy, sidukumap, for treatment of rheumatoid arthritis. The pair have yet to file an application for the IL-6 inhibitor. In the meantime, the FDA is reviewing an application for a drug of the same class, sarilumab, that Sanofi and Regeneron submitted months ago.

I can't say what will happen once Witty shuffles off from his corner office, but I'm confident that Glaxo's pipeline won't be returning this company to top-line growth for years to come.

Keith Speights: Bristol-Myers Squibb (BMY 0.45%) definitely has some winners in its pipeline. The problem is that most of its late-stage pipeline consists of studies targeting expanded indications for drugs already on the market.

Bristol's only phase 3 clinical study for a truly new drug is for prostate cancer immunotherapy Prostvac. And counting Prostvac requires an asterisk, since the drugmaker isn't conducting the study. Bavarian Nordic, the developer of the vaccine, is handling the clinical trial. Bristol has an exclusive option to license Prostvac after data is available from the late-stage study.

What about other drugs in the pipeline? The good news is that Bristol has 27 clinical trials in progress. The bad news is that all but six of them are in early stage testing. There's a significant risk that several of those early stage candidates won't advance to the next stage.

As for the half-dozen drugs in phase 2, there's plenty of potential. I'd keep my eye particularly on autoimmune biologic lulizumab, which Bristol licensed from Novo Nordisk last year. However, there's a long way to go for lulizumab and the other mid-stage candidates. A lot can happen to derail even the best-laid plans.

Statistically speaking, the earlier the clinical stage, the more risk. Bristol's pipeline is stacked heavily with phase 1 candidates and only one new drug in phase 3. That harsh reality earns Bristol-Myers Squibb my nomination for big pharma's riskiest pipeline.

Cheryl Swanson: Even though AstraZeneca (AZN -0.17%) faces a major revenue hit from patent expirations on drugs such as cholesterol blockbuster Crestor, CEO Pascal Soirot pledged that the pipeline would boost sales 75% within a decade to $45 billion by 2023. You can almost forgive Soirot's audacity; the pledge was made to fend off Pfizer's $120 billion hostile-takeover bid in 2014. But Soirot hasn't backed down. He reiterated the goal as recently as Astra's last earnings call.

A sky-high goal like that carries sky-high risk for investors. Astra's cancer-treatment pipeline must fly through the FDA and come out with megablockbuster sales. The chance of that is slim to none. The biggest drug in Astra's cancer pipeline is checkpoint inhibitor durvalumab, touted to achieve $6.5 billion in annual sales. That kind of performance might be possible if the drug was a first mover. But durvalumab is going to be the fourth in this class of therapies on the market -- at best.

Meanwhile, Merck and Bristol-Myers are already happily divvying up the checkpoint inhibitor market with Keytruda and Opdivo, and Roche is hot on their heels with a third product. The FDA isn't going to display any kind of urgency to approve durvalumab, not with similar drugs already on the market. In fact, durvalumab has encountered multiple setbacks recently, virtually ruling out its fast approval for lung cancer. As the leaders continue to consolidate their positions, it's difficult to see how Astra's drug can compete.

While its late-stage cancer drugs are the most crucial, Astra also expects stellar results from other projects in its pipeline. But out of the 145 projects, many target high-risk categories such as neuroscience, and R&D has grown so high the company needs partners to help manage the burden of development costs.

No one can dispute Astra's pipeline is full of ballast. But the risk is so high, the stock is now languishing well below Pfizer's offer price. In sum, the light at the end of the pipeline looks very far away for its investors.