Amazon will reportedly launch its latest Kindle in the coming days. And a leak has given us insight on what the Kindle Oasis might be like.

At some point this week, e-commerce giant Amazon.com (AMZN -3.21%) is widely expected to unveil the latest generation of its hugely popular Kindle e-reader: the Kindle Oasis.

As a company with a famous penchant for secrecy, the exact release date isn't clear at this point. However, one fairly credible source, Amazon's CEO, tweeted last week that the device should make its debut in the coming days:

And then a product leak on the Chinese e-commerce site Tmall made its way to the media, shedding light on at least some of the new features that will find their way into Amazon's latest e-reader. So, before it hits the proverbial shelves, let's quickly review some of the most interesting features that, according to a since-removed Tmall page, will be in what's going to be called the Amazon Kindle Oasis.

Prominent side bezel
Judging from the image leaks, the Kindle Oasis will dramatically shift the screen to one side of the device's body, unlike the centered screen of the current Kindle Voyage. The images also clearly show the new, larger side bezel will come with three long, rectangular navigation sensors, which also implies the device will come in both right-handed and left-handed versions. Either way, making one bezel thicker than the other should, in theory, make one-handed reading far simpler for Kindle users. Commuters rejoice!

It keeps on going, and going, and going...
The Kindle Oasis promises to break fresh ground in terms of its extended battery life thanks to its unusual design and new charging cover. Amazon appears to have shifted a significant portion of the Oasis' battery storage into the thicker side bezel. What's more, when paired with the Amazon-branded charging case the company plans to debut, the Kindle Oasis is rumored to enjoy an astounding standby battery life of up to 20 months. 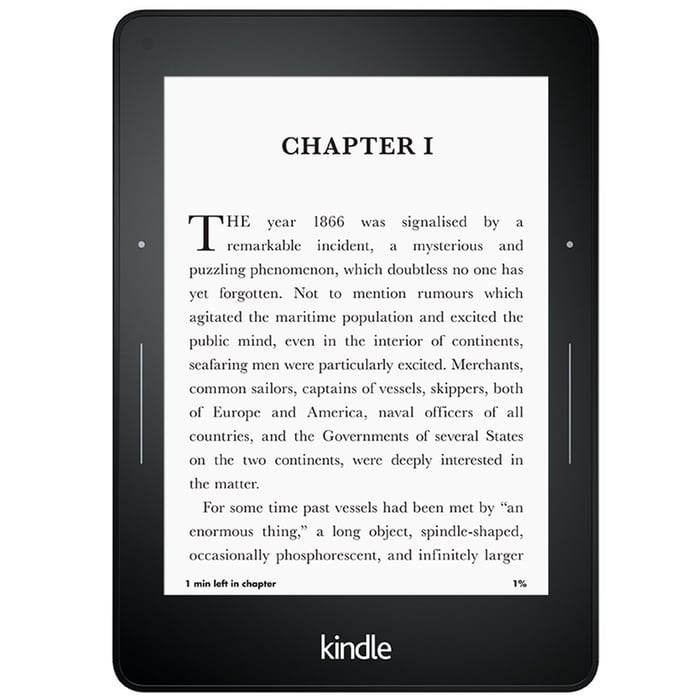 Not waterproof
In what appears to be the first downside of the device, any interested users will want to enjoy their forthcoming Kindles at a safe distance from the pool or the beach this summer. Alas, the waterproofing we've seen included in other popular consumer electronics like Samsung's Galaxy S7 will reportedly not appear in Amazon's Kindle Oasis. This has apparently been a longtime request among Kindle enthusiasts. Maybe next year...

Lighter, brighter
According to the Chinese-to-English translation, Amazon's latest Kindle will weigh 131 grams, or 0.29 pounds, which sits appreciably lower than the Kindle Paperwhite's 205 grams or Kindle Voyage's 180 grams. Given the tiered battery construction mentioned above, the Kindle's thinness dramatically differs across the device. At its skinniest, the device will reportedly measure 3.4 millimeters, and that will increase to 8.5 millimeters at its thickest point. Looking to its screen specs, the Oasis' screen is expected to feature the same 300 ppi definition as the Kindle Voyage. However, Amazon has reportedly packed 60% more LEDs into the screen, which should provide a marked improvement over its predecessor in terms of the clarity and sharpness of its text.

Hurry up and wait
One thing that the purported leak didn't cover was how much the Kindle Oasis will cost. For context, the current Kindle Paperwhite retails for $119.99, and the Kindle Voyage, whose features the Oasis more closely resembles, sells for $199.99. Again, the exact timing on this week's launch isn't exactly clear. When the news does eventually break, make sure to check back with us for further analysis of the upcoming eighth generation of Amazon's hugely popular e-reader.