To truly understand this chipmaker, you need to know how efficiently its factories are running. Here's how.

Cypress Semiconductor (CY) is not an easy stock to own. The microchip maker is coming off a difficult 2015, where revenues more than doubled thanks to the blockbuster acquisition of Spansion. But earnings and free cash flows turned negative. From on New Year's celebration to the next, Cypress shares fell a heart-stopping 32%.

All of these financial metrics are important, of course. But there's one unusual number that will give you a much deeper understanding of this company, and a better handle on where the stock might go next.

Say hello to Cypress Semiconductor's factory utilization. It's the one number you need to know above all others.

What is this?
Cypress runs a flexible manufacturing strategy, outsourcing some work to third-party chip foundries but also running its own manufacturing facilities.

This in-house chip-making lines can be a valuable asset when foundry partners are swamped with orders from a plethora of so-called fabless chip designers. Cypress also has the ability to research and implement improvements to its own manufacturing facilities, fine-tuning the process to the hilt. Sometimes it's cheaper to roll your own chips. And sometimes, those external foundries simply can't meet your exact needs on time, because their factories aren't set up to handle your specifications quite yet.

Hybrid manufacturing is not a very common strategy in the modern semiconductor industry, but Cypress doesn't stand alone. Texas Instruments (TXN -1.57%) is one famous example of a similar model, leaning on foundries when that makes sense but also running several highly capable chip fabs in-house. Like Cypress, TI slides the workload back and forth between these two options in response to market demands.

For all their benefits, company-owned manufacturing assets also come with a big downside: They're expensive to build, and also come with serious fixed costs.

That's why it's important to keep track of the factory utilization rate. In an ideal world, Cypress would keep its factories running at full speed at all times. Unless the foundries just don't have any capacity left over to handle the company's orders, 100% factory utilization would be a sign of absolutely optimal business conditions.

Where Cypress stands today
At the end of fiscal year 2015, Cypress was running its fabs in Minnesota and Texas at about 60% of maximum capacity. That's in line with the utilization levels in recent years. Spansion brought in additional business, but also came with its own set of manufacturing assets.

In a longer-term perspective, this is not necessarily a great ratio. Utilization stood at 75% at the end of 2011, and management complained about low utilization at that moment in time.

In other words, there's plenty of room for improvement, and the low utilization explains a lot of Cypress's disappointing returns in recent years. Gross margins tend to follow the utilization ratios with a slight delay, and share prices won't be far behind: 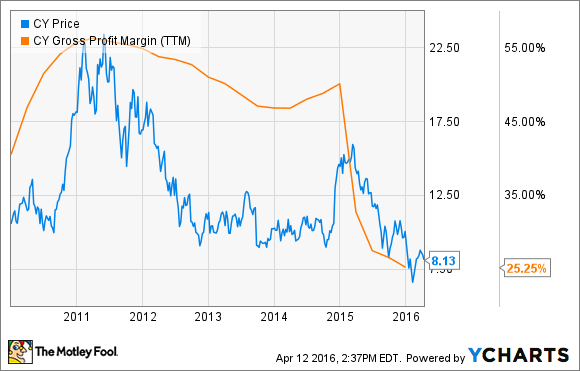 Management expects the utilization ratio to drop in the short term, running at approximately 50% in the first quarter. Cypress is burning through excess inventories at the moment, and things will improve when that process is complete.

Currently, the company expects utilization to bounce back in the second half of 2016. Aside from matching market demands in a more organic fashion, Cypress is also migrating some products from third-party foundries to Fab 25 in Minnesota.

If all of this works out as planned, gross margins should improve in the long run. Look for more detail when Cypress reports first-quarter results, at the end of April or early May.