Please ensure Javascript is enabled for purposes of website accessibility
Log In Help Join The Motley Fool
Free Article Join Over 1 Million Premium Members And Get More In-Depth Stock Guidance and Research
By Daniel B. Kline - Apr 13, 2016 at 10:44AM

One is a boring pick while the other has potential and a ton of risk.

To put things in a sports context, AT&T (T 0.78%) equals Tom Brady and the New England Patriots while Frontier Communications (FTR) comes out closer to Robert Griffin III and the Cleveland Browns.

One is the perennial winner that gives you little reason to think it's headed for a collapse. The other is an upstart full of raw potential with a chance at greatness, but probably a much better one of flaming out. Both companies have a mix of risk and upside, but it's really a case of considering whether paying a premium for greatness or making a bet on potential makes more sense for you. 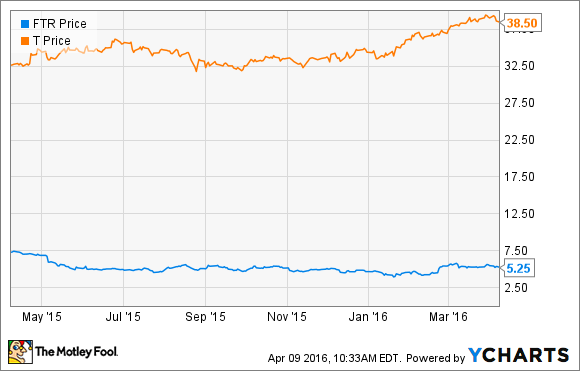 The case for AT&T
AT&T not only stands as one of the top two wireless companies, but it's also a leading player in cable and broadband. It also owns DirecTV, which gives the company multiple price points in the pay television space. Like Frontier, or any other cable company, it does face risk from cord-cutting or cord-shaving, but its ability to bundle multiple services together gives it more ability to fight those trends than many of its rivals.

It seems unlikely that AT&T will make any large subscriber gains over the next few years, but it should more than hold its own. Last year, for example, the company had 2.8 million wireless net adds with 2.2 million of those being in the United States. It also added 192,000 broadband customers and only lost about 130,000 video customers, in line with overall trends.

CEO Randall Stephenson seems very confident in the company's prospects going forward and it's hard to disagree with him.

"We now have a unique set of capabilities that positions us for growth and also gives us a strategic advantage in providing consumers and businesses the integrated mobile, video and data solutions they want," he said in the company's Q4 earnings release. "Our DirecTV integration is going well, and the customer response to our new integrated mobile and entertainment offers is strong.

The case for Frontier
If AT&T is a steady-as-she-goes known entity play, Frontier would be more of a buy based on what might happen. The company has borrowed billions to go from being a tiny niche cable and broadband player to becoming a mid-size operator. On April 1, the company finished its $10.54 billion acquisition of Verizon's  wireline operations in California, Texas, and Florida.

The deal adds approximately 3.3 million voice connections, 2.1 million broadband connections, and 1.2 million FiOS video subscribers to Frontier, more than doubling the company's size. In theory, that should give it some economy of scale and put it on a path to increased profitability.

Of course, the in theory part should be in bold because it's a gutsy, but very risky ploy. The company is right that bigger is better when it comes to providing cable and broadband, but Frontier is expanding as a secondary provider in all of its markets. That means the customers it has bought have a choice, sometimes more than one, and if they don't like their new provider they could switch.

Like his counterpart at AT&T, Frontier CEO Daniel J. McCarthy chose to focus on the upside in his remarks in a press release announcing the deal going through.

Which is the better buy?
Even though AT&T has less upside, it's hard to argue against a perennial winner in favor of a company following such a risky strategy. Frontier has the pieces in place to grow, but it simply has too much work to do.

Even with this latest acquisition making the company much bigger, Frontier is still a small cable and broadband player, and that makes it harder for it to keep up. AT&T, for example, has nearly 16 million broadband customers while Frontier will have under 5 million. That means the bigger player can spend more on innovation while spreading the expense over a larger user base. The same is, of course, true in cable.

Like the Browns and RGIII, Frontier has put the pieces in place, which puts the company in the conversation. But at the end of the day, proven winners like AT&T and the Patriots generally come out ahead in the end.

Frontier has more upside, but it could just as easily -- perhaps more easily -- fall apart as it could put together a winning team.