Costco is still posting better sales results than most retailers. However, it had been producing fairly consistent 6% to 7% adjusted comp sales growth up until late 2015. As Costco's comparable sales trend has weakened, its stock has started to retreat from the lofty highs it reached late last year. 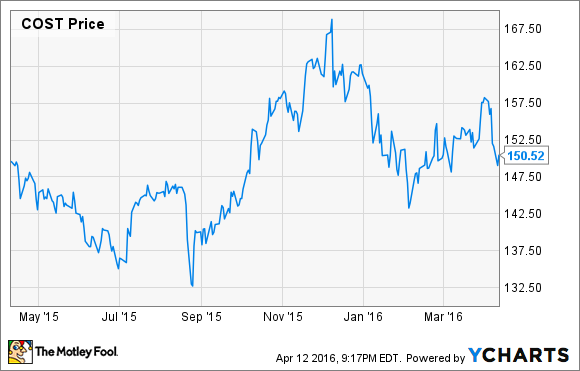 Deflation may be the key
Fortunately, there may be a relatively innocuous explanation for Costco's recent slowdown in sales growth. For the past few years, consumers have been grappling with high food price inflation. Meat and dairy products were some of the hardest-hit items.

However, dairy prices plummeted during 2015 -- reaching a 13-year low last August -- and have remained near multiyear lows since then. Meanwhile, wholesale beef prices have been retreating since last summer. Prices for other meat items have also been on the decline.

When wholesale prices decline, Costco quickly passes those savings on to its members. As a result, CFO Richard Galanti told investors last month that deflation was negatively impacting revenue growth across numerous categories.

Costco takes the long view
Deflation has also started to impact results at other major food retailers, like supermarket giant Kroger (KR 0.51%). During Q4 2015, Kroger reported a modest comp sales decline for its meat department, even as every other merchandise category posted growth.

However, Kroger CFO Mike Schlotman described this as "good deflation" because it led to solid growth in gross profit. Kroger passed on some of the cost savings to customers -- driving higher unit sales -- but also kept some of the cost savings for itself. As a result, the company's gross margin improved by 37 basis points year over year in Q4 2015.

It seems that Costco is taking the long view here. Rather than trying to squeeze out a little bit of extra profit this year, the company is reinvesting in lower prices in order to grow its membership base and encourage its existing customers to shop even more frequently.

The good and the bad
While commodity costs are falling, labor costs are still on the rise, driving up Costco's operating expenses. Due to slowing revenue growth and rising costs, analysts currently expect Costco's earnings per share to increase less than 2% during fiscal 2016. That's not very impressive for a company trading at 28 times projected fiscal 2016 earnings.

However, Costco's investments in price leadership today should pay off in the form of long-term growth. Indeed, most analysts expect Costco's EPS growth to rebound to double-digit territory next year -- and there could be many more years of double-digit earnings growth beyond that.