Eastman Chemical (EMN -0.76%), which was a spinoff of Eastman Kodak's in 1994, struggled for more than a decade to consistently grow revenues and maintain profitability. Since 2010, however, earnings have grown from $125 million to more than $800 million last year. Free cash flow has grown at a similar pace, and is expected to top $900 million this year.

It's taken years of investment and restructuring, but Eastman Chemical finally looks like a cash-flow machine. 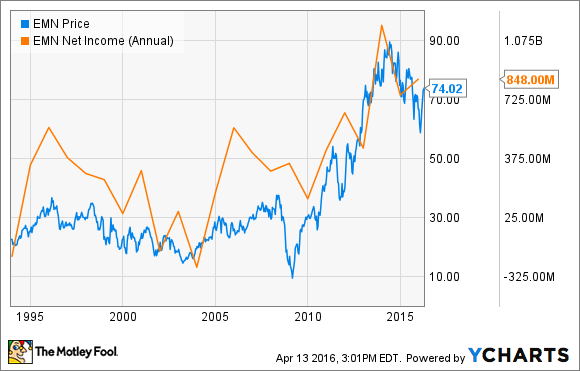 A complete business rehaul
Since 2004, Eastman Chemical's management team divested some of its more-commoditized segments such as its polyethylene production. These divested businesses typically showed high levels of competition and capital intensity, needing continual large-capacity additions to fuel growth.

By 2010, Eastman Chemical's executives adopted a transformational approach toward managing the business. The main strategy was to ramp acquisitions, shifting the portfolio toward specialty products that display higher pricing power and customer demand. 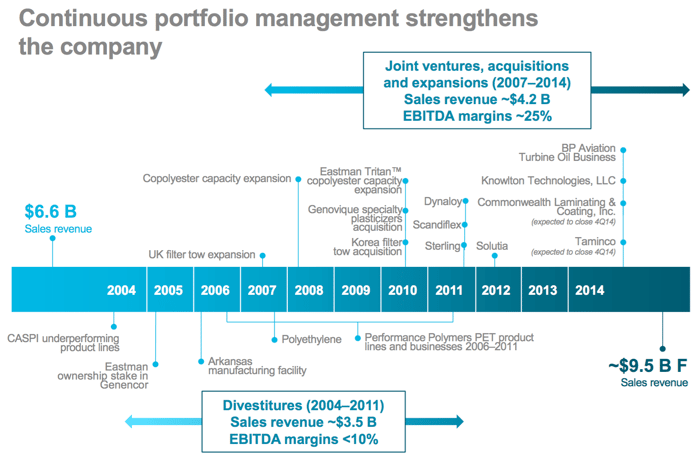 Specialty is paying off
Today, 67% of Eastman Chemicals' revenues come from product lines that have market-leading positions like rubber additives or cellulosic polymers.

Typically, the company has production capacity anywhere from two to 10 times that of the market's third-biggest competitor. It also owns high-cost infrastructure that gives it a permanent cost advantage. For example, its coal gasification facility can covert coal and oxygen into a number of chemicals including methanol, methyl acetate, acetic acid, and acetic anhydride. Most competitors need to synthesize products with higher cost raw materials like oil. Both scale and unique infrastructure typically give Eastman Chemical a 25% to 45% cost advantage in many of its product lines.

Niche products like non-phthalate plasticizers and heat transfer hydraulic fluids also come with strong levels of global demand, allowing the company to generate a majority of sales overseas: 27% of sales come from Asia, 22% from Europe, and 5% from South America. 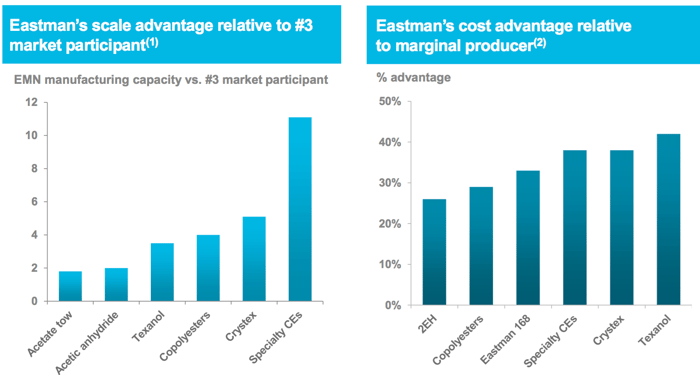 The future looks bright
With its portfolio continuing to transition toward higher growth and more-profitable products, the company expects to generate annual earnings growth between 8% and 12%, with a return on invested capital between 12% and 15%. Management targets EBITDA margins above 20%.

This year, free cash flow is expected to be more than $900 million. If it can match its performance in 2015, shares would trade at an 8.6% free-cash-flow yield. 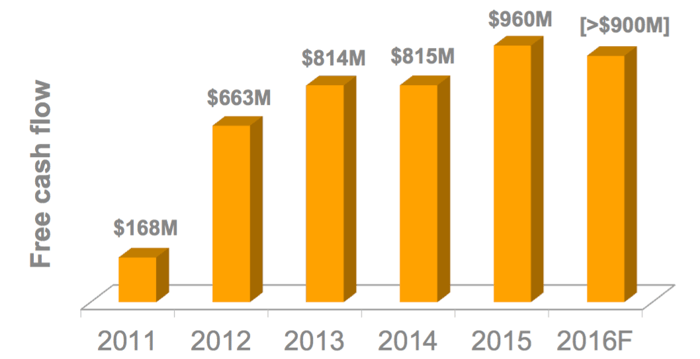 Not only are shares attractively priced, but excess cash flow gives management plenty of options to boost shareholder returns. During the last 12 months, it repurchased $103 million of outstanding shares, including $55 million in the fourth quarter alone. It also reduced its debt by more than $500 million last year.

Ample free cash flow should also be used to grow its 2.5% dividend. Recently, it upped its quarterly payout by 15%, its sixth year of successive growth during which time the company has more than doubled its dividend.

Acquisitions -- which created the Eastman Chemical of today -- aren't getting any less lucrative. The company's recent buyout of Taminco will strengthen its presence in the food, feed, and agricultural markets. The move is anticipated to add $0.60 to earnings per share in 2016.

While Eastman Chemical's transformation will undoubtedly continue at a slower pace, its management team has proven more than capable of building a business that rewards shareholders over the long term. With an undemanding valuation, and plenty of options for allocating its newfound cash flow, Eastman Chemical looks like a great bet for buy-and-hold investors.