Please ensure Javascript is enabled for purposes of website accessibility
Log In Help Join The Motley Fool
Free Article Join Over 1 Million Premium Members And Get More In-Depth Stock Guidance and Research
By Adam Galas - Apr 13, 2016 at 11:25AM

Learn the most important things about high-yield alternative energy yieldcos, including two you should steer clear of and one worthy of your hard-earned money.

Yieldcos are a potentially wonderful way for long-term income investors to profit from the megatrend that is the renewable-energy boom.

But not all yieldcos are created equal. While it's true that NextEra Energy Partners (NEP 1.22%), has taken a beating over the past nine months, its share-price decline pales in comparison with the brutal carnage TerraForm Power (TERP) and TerraForm Global (NASDAQ: GLBL) have faced. 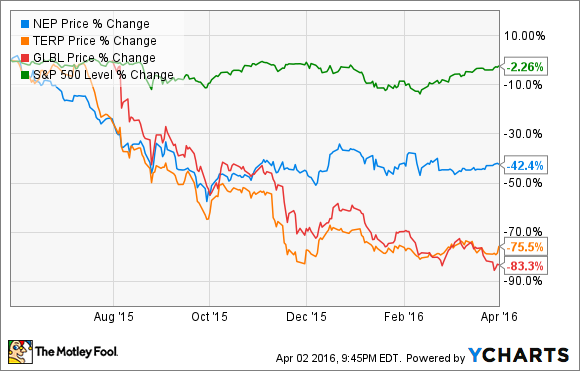 The reasons for the vast difference in performance highlights one of the most important aspects of successful long-term yieldco investing. Let's take a look at why NextEra Energy Partners is a potentially great addition to your diversified income portfolio and why TerraForm Power and TerraForm Global are toxic  stocks you shouldn't touch with a 10-foot pole.

Note that TerraForm Global recently IPOed, so because of its limited performance record, that table is for the last available quarter's data.

TerraForm yieldcos offer payouts that are simply too good to be true. In contrast, Wall Street is pricing NextEra Energy Partners as if its payout is about as secure as that of a typical utility. Yet all three are primarily renewable-energy utilities that pay investors from cash flow generated from assets bought from their respective sponsors and general partners, NextEra Energy (NYSE: NEE) and SunEdison. One slight difference is that NextEra Partner's also owns natural gas pipelines and gets about 25% of its revenue from this source.

The cash flow is secured by extremely long-term, fixed-fee power purchase agreements, or PPAs, with major electric utilities. Thus one might expect all three yields to be roughly the same.

An obvious reason for this enormous yield discrepancy is that NextEra Energy Partners' DCR -- the best single metric of long-term distribution security -- is so much larger than those of its TerraForm peers. This means not only that the yieldco is much less likely to have to cut its payout in the future, but also that it has plenty of room to achieve management's targeted distribution growth rate of 12% to 15% a year through 2020.

Here's why Wall Street hates TerraForm yieldcos
TerraForm's problems stem from the fact that SunEdison is now likely to declare bankruptcy, courtesy of its monstrous and untenable debt load.

Given the utility nature of TerraForm's assets, this shouldn't necessarily spell doom for the yieldCos' payouts except that SunEdison forced them to massively overpay for assets. This resulted in their likewise taking on way too much debt. For example, TerraForm Power now hold $6 in debt for each dollar of cash on its balance sheet.

Excessive debt can light your money on fire

SunEdison and its yieldCos' balance sheets are, simply put, horrific. The utility business isn't cheap, and large amounts of debt are to be expected. By contrast. NextEra Energy's management has been careful to make sure that its interest costs are always well covered by cash flows, as well as maintaining its debt covenants with creditors. SunEdison cared more about growing as fast as possible at any cost and forced its yieldCos to load up on debt to buy overpriced assets. The faster its yieldcos grew their payouts, the more IDRs it would collect. Now, as a result, all three may be forced into bankruptcy protection.

After all, TerraForm Power is so burdened by high interest costs that it's barely making any returns on its invested capital. Similarly TerraForm Global is actually losing money on every shareholder dollar it spends on new renewable energy projects.

Meanwhile SunEdison has delayed filing its annual 2015 financial report because of "material weakness" and both TerraForm Power and TerraForm Global have similarly failed to file these legally required documents. In fact, TerraForm Power has delayed its 10-K not once, but twice. Nasdaq has notified both yieldcos that they're in violation of its listing requirements and at risk of being delisted.

Bottom line
Yieldcos are owned for one reason -- income. Thus, it's essential that investors consider several factors before investing in these high-yield equities. Chief among these are the financial strength of its sponsor, the yieldco's balance sheet, and the long-term security of its payout.

Thanks to SunEdison's short-term-focused, debt-fueled growth binge, both TerraForm Power and TerraForm Global are probably doomed to either follow it into bankruptcy or, at the very least, will probably have to slash their distributions. Contrast this with NextEra Energy Partners, which, thanks to more conservative, long-term-focused management, is well positioned to prosper from the accelerating renewable-energy bonanza.