Please ensure Javascript is enabled for purposes of website accessibility
Log In Help Join The Motley Fool
Free Article Join Over 1 Million Premium Members And Get More In-Depth Stock Guidance and Research
By Jordan Wathen - Apr 15, 2016 at 6:27AM

How poor incentives for mortgage REIT insiders result in suboptimal outcomes for their shareholders.

A Morningstar analyst once opined that "if traditional banks are like Volvos, mREITs are like race cars -- without seat belts or airbags." That may be the best one-sentence description ever written on mortgage REITs.

The mREIT business model is quite simple in that it's very bank-like. Mortgage REITs borrow money at a low interest rate to invest in mortgages that pay a slightly higher rate. The spread between their borrowing costs and investment returns create routine income that's paid out to shareholders. That's very bank-like, indeed, along the lines of the classic "borrow at 3%, lend at 6%" description of banking.

It's the features of banks that mortgage REITs don't have that really sets them apart -- things such as cheap deposits, strong customer relationships, or fee-based business models to prop up their income statements when credit cycles turn and interest rates ebb and flow. All the attributes famed investor Warren Buffett loves about his favorite bank investment, Wells Fargo, are simply nonexistent in the mREIT model.

But what mREITs do offer is yield -- lots of it. Lacking the regulatory scrutiny of the banking industry, mREITs are free to pay out all their earnings as dividends, resulting in double-digit dividend yields on an annual basis. For years following the financial crisis, fat dividend yields were simply good enough reason for mortgage REITs to issue more stock to grow their balance sheets.

Industry behemoths Annaly Capital (NLY 0.80%) and American Capital Agency, which traded at persistent book value premiums in the years following the financial crisis, now trade at 13% and 17% discounts to book value, respectively. As the tailwind of falling interest rates no longer buoyed their investment performance, share price premiums of 2013 have turned into the discounts of 2016. 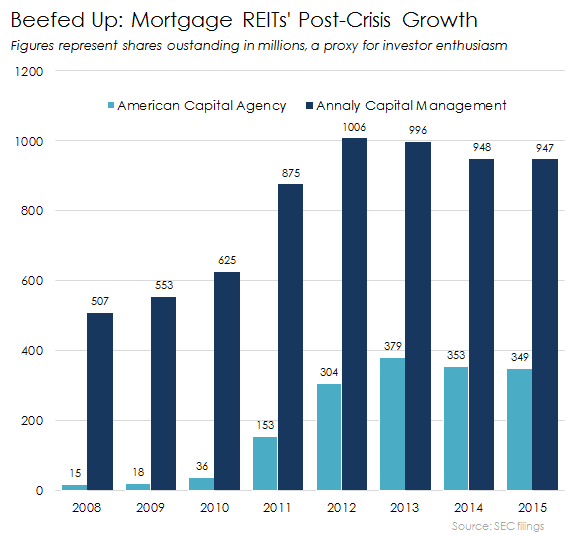 Easy fixes
Perhaps the most unfortunate thing about share price discounts is that there are easy levers for correcting a low valuation.

First, the "extreme" option. Undervalued mortgage REITs could simply liquidate their portfolios, pay off their creditors, and return the balance to shareholders. Winding down is not difficult to do. The industry's preferred asset -- mortgage-backed securities -- ranks among the most liquid securities in the world. Taken at face value, mREITs' below-book valuations indicate that they are simply worth more dead than alive.

If you prefer a less-dramatic alternative, there's an option just for you. Through the normal course of business, mREITs receive principal payments that are typically reinvested into new mortgage-backed securities. Diverting this cash toward debt reductions and share buybacks would drive up their respective book values per share. Call it what it is -- a slow liquidation. Under this scenario, the underlying portfolio would slowly shrink, but the number of shares outstanding would shrink at a faster rate. Shareholders end up wealthier, as book values per share grow incrementally with each share repurchased.

Liquidation, fast or slow, benefits shareholders of undervalued stock. Mortgage REIT managers wouldn't enjoy the same prosperity, however. Industry insiders are paid largely based on the size of their balance sheets than the returns they generate for their shareholders. If you're an insider, performing poorly is preferable to giving up a dime of assets.

Avoiding the right decisions
Managers of publicly traded funds usually avoid shareholder-friendly capital allocation with inaction, deferring the ability to repurchase stock and talking around tough questions on conference calls. This week, however, we saw just how far a mortgage REIT would go to actively defer shareholder-friendly decisions when Hatteras Financial Corp's (NYSE: HTS) announced that it would sell out to Annaly Capital.

The deal is rich for Hatteras execs. The company's corporate manager will receive a one-time payment in excess of $45 million. Its executive team will also enjoy generous 30-month consulting gigs with Annaly following the merger, ensuring their paydays persist long after Hatteras Financial is folded into its larger competitor.

The merger path isn't exactly paved with gold for Hatteras investors, though. Shareholders will receive a mere $15.85 per share, an 18% discount to the company's last-reported book value of $19.38 per share. Making matters worse, the terms of the merger require that nearly two-thirds of the purchase price be paid for in Annaly stock, which at least trades at a smaller discount to book.

Only in the world of permanent capital funds can a management team collect million-dollar paydays and multi-year consulting contracts for selling a business at a price less than its liquidation value, with the deal paid for primarily in stock in lieu of cash.

Voting down these self-dealing transactions has its own perils, however. Last year TICC Capital's (NASDAQ: TICC) managers decided that they would hand over the reins to another manager. The existing management company would reportedly collect a multimillion-dollar sum from the incoming manager. The fee created a bit of a problem: The incoming manager handpicked by the outgoing TICC Capital team would run the fund on less-economic terms than others interested in managing the company. In short, what was best for management wasn't necessarily best for shareholders.

Ultimately, TICC Capital's investors fought back and voted down the management change. In response, TICC Capital's management team promptly forgot it ever wanted to hand over control of the company and its lucrative management contract. Now, the same group that wanted to hand off responsibility for managing the fund is still in the driver's seat, and its shares continue to trade at one of the widest discounts to book value in its industry. Take it as a warning: Rejecting a raw deal does not guarantee the arrival or consummation of a better offer.

The bottom line is this: Mortgage REITs (and other publicly traded funds) really are the high-risk race car to the banking industry's Volvo. The risk is not limited to high financial leverage or the "house of cards" liability structure -- the visible risk of missing seat belts or airbags. Risks also include something that's hard to see: the risk that the driver has no regard for the health or safety of the passenger.

Though one could write volumes about the poor incentives in the banking industry, the incentives for mREIT managers make compensation committees of America's banks appear saintly by comparison.