Please ensure Javascript is enabled for purposes of website accessibility
Log In Help Join The Motley Fool
Free Article Join Over 1 Million Premium Members And Get More In-Depth Stock Guidance and Research
By Travis Hoium - Apr 15, 2016 at 11:16AM

Could SunEdison Inc. be an attractive acquisition target? The answer may surprise you.

iant renewable energy developer SunEdison (SUNEQ) hasn't filed for bankruptcy -- yet -- and that's brought about some speculative hope that it could be saved by some kind of white knight after all. Several media outlets have suggest that other developers, hedge funds, or even an insider could be interested in buying out the company.

Could SunEdison soon be swallowed up by someone else? Crazier things have happened, but I have my very strong doubts.

It would take billions to acquire and run SunEdison
Let's overlook SunEdison's $11.7 billion in debt and uncertain balance sheet for a moment and look at what it would take just to run the business. The first problem with acquiring SunEdison is that a company would have to find a way to build billions of dollars in projects and then find buyers for those projects.

As of early January -- the last time investors heard from management in a meaningful way -- the company had 2,884 MW of projects under construction around the world and had invested $537.4 million of equity and taken out $328.7 million in debt on those projects, or $866.1 million. And that $866.1 million cost only got these projects to 37% completed. 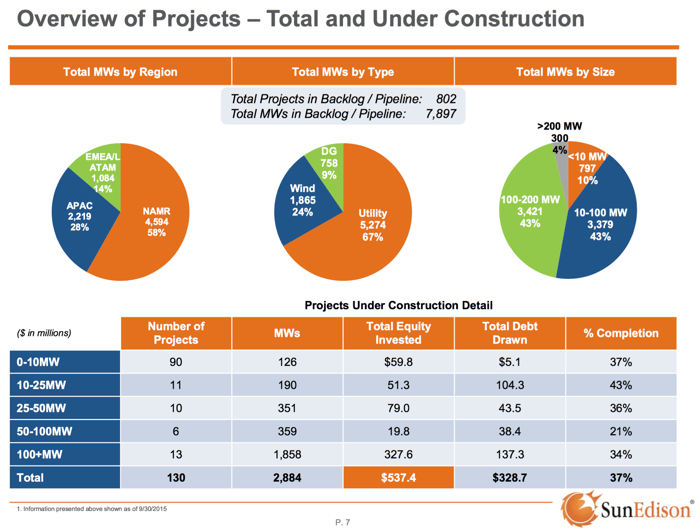 A simple calculation shows that you would need another $1.47 billion just to complete those projects. Given SunEdison's recent variable borrowing rate of 11%+, I don't think you would want to fund construction with debt, so an acquirer would probably have to come up with a couple billion in funds to operate the company on top of any acquisition price.

And then you would have to find a buyer for these projects because no fund buying SunEdison would want to own single-digit return renewable energy projects for the next two decades. The yieldco market has seen dividend yields skyrocket, making it difficult to raise new equity at attractive rates, which was the point of yieldcos to begin with. Maybe a utility or pension fund may want to acquire projects as they're completed, but it's uncertain if you would be able to get the $2.34 billion put into those projects back with any sort of return.

I don't see much appetite for a hedge fund, or even another developer, spending billions of dollars to buy and operate SunEdison's development business. It's just too large with too much risk and too much debt. And that's SunEdison's core problem to begin with.

But today, SunEdison's stake in TerraForm Power is worth just $633 million and its stake in TerraForm Global is worth $170 million. The IDRs don't appear to be worth much at the moment. Both yieldcos have such high dividends that there's no ability to issue new capital for growth (which was the plan all along) and I would argue that both need to reduce dividends to shore up their balance sheets.

A $803 million value from the yieldcos may sound appealing, but when you compare it to $1.47 billion needed to complete projects and $11.7 billion in debt overall, it's not enough to justify someone acquiring the company.

The downward spiral continues
Speculating that a white knight could ride in to save SunEdison may sound appealing, but for that to be the case, an investor would need to see value in the pieces they're buying. I don't see that being the case, especially when you consider the billions of dollars needed to run the development business on an ongoing basis.

The biggest problem SunEdison faces is that it has lost the market's confidence, and as a result, its borrowing costs have risen dramatically. That makes it uncompetitive as both a builder and owner of renewable energy projects. And an acquirer, no matter who it is, can't fix that without investing many billions of dollars beyond the price to acquire SunEdison. And I don't see anyone with the appetite to do that.