A shift in the top ranks at Berkshire Hathaway (NYSE:BRK.A)(NYSE:BRK.B) is a hint that its reinsurance businesses, historically one of its stars, is slated to shrink. The company recently announced the retirement of Tad Montross, who has led Berkshire's General Re subsidiary since 2008 after sharing the role for seven years prior. Montross's position will be filled with an unnamed executive, who will report to Ajit Jain, the head of Berkshire Hathaway Reinsurance.

Ajit Jain gets frequent praise from Buffett. It shouldn't be much more for Jain to handle, given General Re and BH Reinsurance operate in the same industry.

Last year, Buffett turned cold on the reinsurance industry. He told his investors that he expected lower returns from the industry during the next 10 years due to an influx of capital. Buffett also reduced the company's stake in Munich Re in 2015, further dialing back his exposure to the industry. In 2014, he warned about surging investor interest for catastrophe bonds, a special type of bond insurers often issue to pass on the risk of a major catastrophic event.

When surplus grows too large, insurance companies that prioritize scale over underwriting profits compete aggressively on price. Insurers lose; insurance buyers win. It's an unfortunate reality that large losses, usually by catastrophe, are one of the most important factors for swinging the balance back into the favor of insurers. 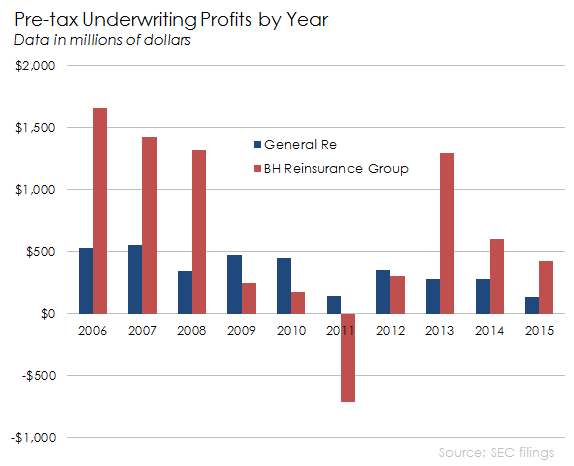 It wouldn't be the first time that Buffett has stepped off the gas pedal when the risk-reward turned unfavorable. Over a period spanning two decades, he watched as National Indemnity, another insurer Berkshire owns, shrank written premium volume 85%, while refusing to fire a single worker. Buffett views it as an important part of building a profitable culture -- he wants his insurers to do nothing when pricing is unfavorable.

Luckily, there are other fertile grounds to put cash to work. Buffett noted in his annual letter to shareholders that Berkshire's companies invested $16 billion in property, plant, and equipment in 2015, much of it in the company's energy units and its railroad, Burlington Northern Sante Fe.

Though regulated utilities aren't particularly profitable -- at least not by Berkshire's standards -- lower capital requirements for its shrinking insurance units somewhat validates the importance of having a go-to sponge for capital in the energy industry.