Please ensure Javascript is enabled for purposes of website accessibility
Log In Help Join The Motley Fool
Free Article Join Over 1 Million Premium Members And Get More In-Depth Stock Guidance and Research
By Daniel Miller - Apr 18, 2016 at 8:53AM

The Dow and S&P 500 moved higher last week, and these three stocks made major moves. 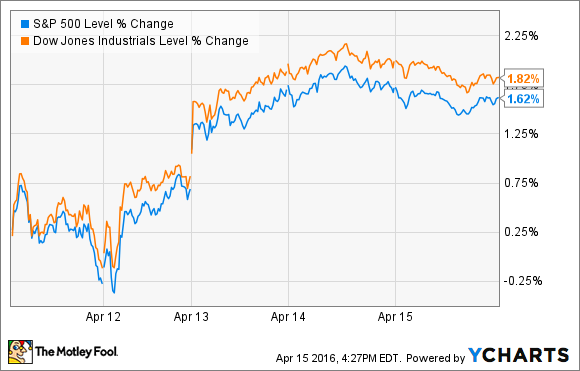 The markets held their early week gains despite slowing down toward the end of the week, as industrial production was reported to have fallen by 0.6% in March compared to the previous month, a steeper decline than anticipated. Outside of economic data, here are some highlights of three stocks making big moves last week. 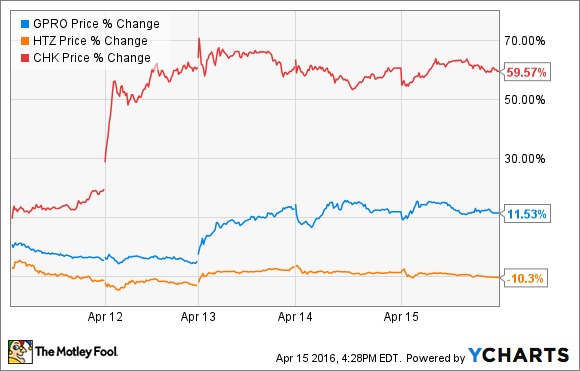 Bankruptcy woes?
The single-largest mover in the S&P 500 last week was Chesapeake Energy (CHKA.Q), which moved roughly 60% higher throughout the week after a key announcement. The driving force behind Chesapeake's surge was that banks ended up being more forgiving than expected with the company.

The company's $4 billion credit line was reaffirmed, and won't be reviewed again until June 2017. That gives the beleaguered company some breathing room, and visible liquidity for at least a year. In addition to that, Chesapeake's banks also agreed to temporarily relieve its senior secured leverage ratio by suspending it until September 2017, and reduced the company's interest coverage ratio to 0.65 from 1.1 through March of next year.

Essentially, with Chesapeake's surge higher after this announcement, it hints that investors are more optimistic that the company can vastly improve its balance sheet during the next year. However, investors should also realize this doesn't exactly solve any problems; it just gives the company a little relief and some extra time.

The pain continues
If you're an investor in Hertz Global Holdings (HTZG.Q), it's been a pretty brutal 12 months, with the value of its shares being slashed almost 60%. The pain continued last week -- the company's shares slumped about 10% early in the week after the company lowered its guidance due to excess capacity in the rental-car industry. The news was even disappointing enough to rattle investors of fellow car-rental rival Avis Budget Group, sending its stock lower, as well.

On the bright side for investors, which is much welcome at this point, I'm sure, Hertz maintained its full-year adjusted EBITDA guidance of between $1.6 billion and $1.7 billion. That's partly due to the company's cost-cutting initiative, which is expected to slash $350 million of costs this year.

Switching gigs?
Shares of GoPro (GPRO -0.45%) rose roughly 16% midweek after technology news site The Information reported that longtime Apple industrial design team member Danny Coster had left the company to lead a new design group at GoPro. The report says Coster will also be serving as the company's vice president of design by the end of the month.

While it seems like a knee-jerk reaction to a simple hire, it's a hire from Apple's elite design team, and gives investors hope for GoPro's upcoming products. It's certainly a positive development considering that investors are anticipating a refresh of its HERO4 Camera, and the upcoming launch of its Karma drone.

I'm in agreement with fellow Fool Steve Symington who wrote, "With GoPro's painful holiday-quarter results still lingering, I think investors would be wise to keep their eyes fixed on its quarterly report later this month to determine if GoPro stock has indeed found a bottom."