Please ensure Javascript is enabled for purposes of website accessibility
Log In Help Join The Motley Fool
Free Article Join Over 1 Million Premium Members And Get More In-Depth Stock Guidance and Research
By Beth McKenna - Apr 19, 2016 at 11:15AM

The heavyweight among water stocks has been gushing strong returns. Can its outperformance continue?

Shares of American Water Works (AWK -0.42%) returned 16%, including dividends, in the first quarter of 2016 -- equivalent to a sizzling annualized return of nearly 64%.

This performance by the largest investor-owned water and wastewater utility in the United States mops up that of the S&P 500, which returned 1.4%. It also leaves underwater the performances of the second- and third-largest publicly traded companies in the industry, Aqua America (WTRG 0.07%) and American States Water (AWR 1.20%), which returned 7.4% and negative 5.7%, respectively.

Why has American Water Works stock been red-hot in 2016? And can its outperformance continue? 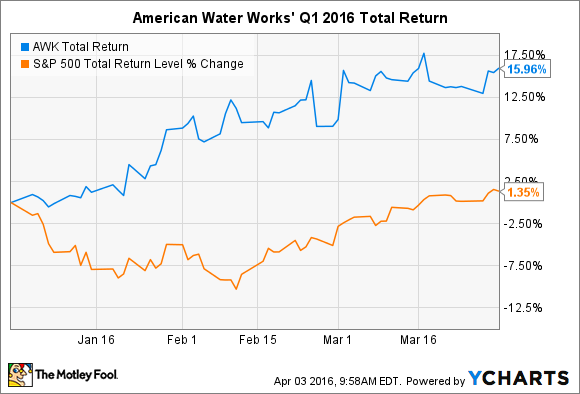 American Water Works' business
American Water Works provides water and wastewater services to an estimated 15 million people in 47 U.S. states and one Canadian province. It operates as a regulated utility in 16 states. The company also has a market-based business that primarily builds, operates, and maintains water and wastewater facilities for military bases, municipalities, industrial customers, and others.

Flight to safety in a rough market
American Water Works stock's outperformance in the first quarter was largely due to investors' flight to safety amid a challenging market. While the broader market managed to eke out a slight gain in the quarter, the S&P 500 had been down as much as 10.5% year to date in mid-February. This caused many investors to seek safer investing harbors -- utility stocks in general were a major beneficiary.

This flight to less-volatile water utility stocks caused the valuations of almost all of these stocks to rise. American Water Works' price-to-earnings ratio increased 15.4% in the quarter. 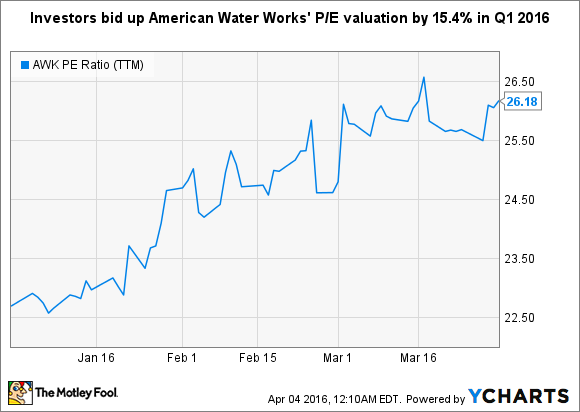 These two primary advantages should help the company continue to post superior revenue and earnings growth relative to its peers just as it did in 2015. 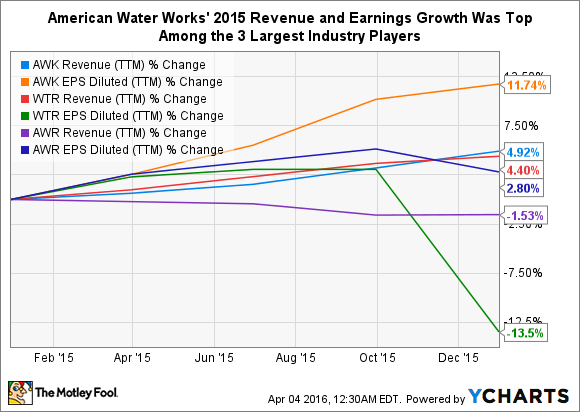 American Water Works' dividend stats
The company's current payout ratio (dividends paid as percentage of net income) of 50.2% is the second-lowest among the eight water utilities that operate in the U.S. and have market caps of at least $300 million. Dividend ratios less than roughly 70% generally suggest that a company should be able to comfortably afford to pay its quarterly dividends. 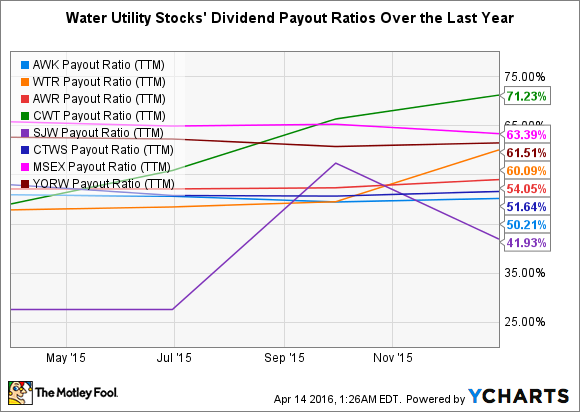 American Water Works' conservative dividend policy is a plus for investors who are more concerned with long-term capital appreciation than current income. There are plenty of opportunities for the company to use its funds to expand its business. Investors whose top concern is current income, however, might want to look elsewhere. The company's current dividend yield of 1.9% is the lowest among our eight industry players.

A stock for the long term
Water utility stocks are attractive investments because fresh water is an essential commodity. Moreover, supplies could decrease because of the Earth's long-term warming trend.

American Water Works is a top choice in the industry, largely because of its huge relative size and geographic diversity. The stock is best-suited for conservative investors whose primary concern is capital appreciation, as well as for the conservative portion of many investors' portfolios.