Personal computer chipmaker Intel (INTC -4.62%) announced its first-quarter financial results and guidance for the coming quarter (as well as a reduction to its full-year guidance). According to Intel, the personal computing market as a whole is expected to decline at a high-single-digit percentage clip -- worse than the mid-single-digit rate that management had expected going into the most recent quarter.

However, I would argue that this isn't the case and that the comments that Intel executives made on the call are actually positive for the graphics specialist.

NVIDIA isn't exposed (much) to the broader PC market
Although NVIDIA's graphics processors go into personal computers, the company's products only address a subset of the overall personal computing market -- gaming and professional workstation computers (with the former much larger for NVIDIA than the latter). 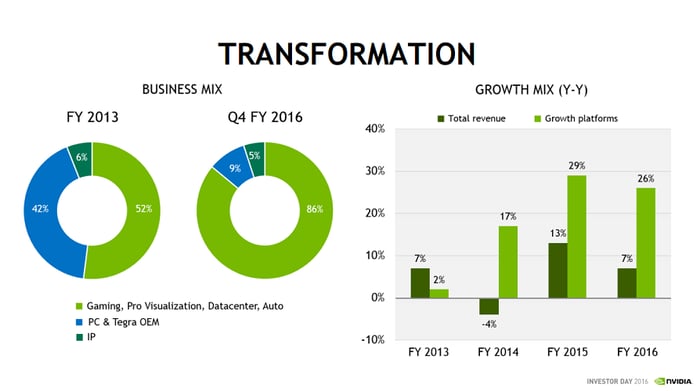 Indeed, notice in the slide above (taken from NVIDIA's most recent analyst day) that only 9% of the company's revenue in its most recent quarter came from "PC and Tegra OEM." The rest of its revenue came from IP licensing (royalties from Intel), gaming, professional workstation GPUs, Tegra automotive, and high-performance compute accelerators.

In fact, in Intel's announcement that it would be implementing significant restructuring actions, the company specifically cited the market for gaming computers as one that's growing and worth increasing investments in.

To drive this point home, on Intel's prior earnings call, management said that both high-end Core i7 and unlocked PC enthusiast "K" processors saw "all-time volume records" in 2015. The strength here probably continued in the first quarter of 2016 as the company reported that desktop chip average selling prices rose 6% year over year, potentially suggesting further strength in gaming and other high-end processor segments.

It's worth pointing out that the performance of a gaming-oriented computer in games is more a function of the graphics processor(s) than of the CPU. The CPU is important and it needs to be fast enough to keep up, but graphics cards become "inadequate" for top-end games faster than CPUs do.

This should mean that if Intel's gamer-oriented CPU business is doing well, then gaming-focused graphics cards should also continue to do well.

The difference between Intel and NVIDIA
Although both Intel and NVIDIA benefit from the increasing demands of PC games, NVIDIA is better positioned by virtue of the fact that gaming-oriented chips make up a substantial portion of its revenue. Intel, on the other hand, is so large and commands so much share of the processors sold into the personal computer market that strength in one segment like gaming can easily be more than offset in other segments.

A similar phenomenon can be observed in the market for high-performance compute accelerator cards. For NVIDIA, this market brought in $339 million in revenue in its most recent fiscal year. For a company with total revenue of around $5 billion, growth in such a segment can actually be quite material.

For a company like Intel, which is on track to do north of $55 billion in sales this year, even capturing 100% share in this market wouldn't move the needle.