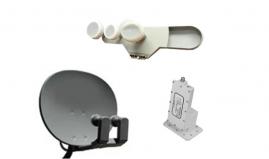 What: Shares of CalAmp Corp. (CAMP 3.83%) fell as much as 16.1% early Wednesday, then settled trade down around 9.8% as of 11:00 a.m. EST after the company released inline fiscal fourth-quarter results.

So what: Quarterly revenue climbed 1.3% year over year, to $70.8 million, and translated to a 1.6% increase in adjusted net income, to $11.74 million, or $0.32 per share. Both figures were roughly in line with financial guidance revised in a pre-announcement by CalAmp last month.

But the company also revealed that, subsequent to the end of the fiscal year, satellite customer EchoStar (SATS 2.07%) told CalAmp it would discontinue purchases from CalAmp at the end of its current product demand forecast, primarily as it consolidates suppliers and copes with reduced demand for products CalAmp supplies. As a result, and because EchoStar comprises essentially all revenue under CalAmp's Satellite segment, CalAmp expects to discontinue Satellite operations in fiscal year 2017.

Now what: But CalAmp also expects tremendous growth this year from its primary Wireless DataCom segment, revenue from which increased 13.3% in fiscal year 2016, to $241.4 million, and represented roughly 86% of CalAmp's total sales. Noting CalAmp will treat Satellite revenue as coming from "discontinued operations" this year, CalAmp anticipates revenue from continuing operations to be $375 million to $400 million in fiscal year 2017, which should translate to adjusted net income per share of $1.15 to $1.35.

Nonetheless, CalAmp investors are rightly surprised by the loss of the Satellite segment, as the company undoubtedly enjoyed its financial contributions and cash flow while it lasted. And with the caveat that we don't lend much credence to Wall Street's near-term demands, analysts' consensus estimates called for higher fiscal year 2017 revenue of $414.1 million, and adjusted earnings of $1.43 per share.

In the end, CalAmp will be just fine as it hones its focus on its primary growth opportunity with Wireless DataCom. But it's no surprise to see shares trading lower on Wednesday.