The burrito roller has identified a number of costs it's incurring as it tries to rebound from its food safety woes. In this article, we discuss one significant cost that management hasn't said much about to date. 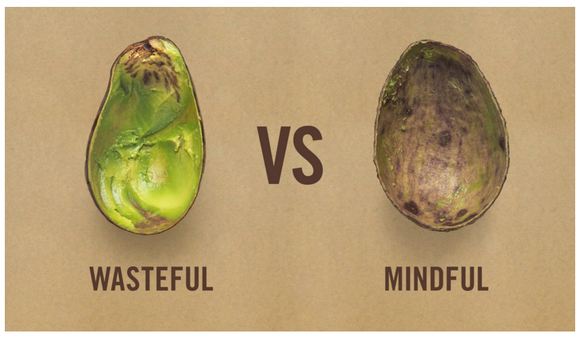 An illustration of Chipotle's efforts to cut food waste within its sustainability program. Unfortunately, the company has been incurring more food waste to ensure safety as of late. Image: Chipotle Mexican Grill.

We know from the most recent update, issued last month on March 15, for example, that February comps trended in the negative mid-20s range -- an improvement from the negative mid-30s at the peak of the company's food and PR troubles in January.

We also know that restaurant contribution, or in Chipotle's terminology, "restaurant-level operating margin," is going to take a significant hit this quarter. Restaurant contribution can be thought of as revenue minus direct restaurant costs, such as food, labor, occupancy, and other store operating expenses. The company's update indicates that restaurant margin will slide to the mid-single digit range in Q1. This paper-thin margin from lost sales is the single biggest factor behind Chipotle's projected quarterly loss of "($1.00) per share or worse."

In describing the impacts on restaurant contribution, Chipotle cited a troika of costs: higher food cost due to increased waste as it rejects any questionable ingredients, higher labor costs in service of its free burrito promotions, and higher marketing and promotional spends.

One cost that management hasn't addressed in its updates, however, is the net effect of continuing to open stores in 2016 at the breakneck pace Chipotle has kept for several years. This is the legacy of recent history, when customer lines snaked out the door, and the chain could barely meet customer demand. You remember those days, don't you?

The original rationale for location expansion
As I wrote in December, Chipotle had a deep interest in maintaining a fierce store opening schedule before its food issues began. The company's industry-leading double-digit comp increases were beginning to peak in early to mid 2015, but a felicitous future seemed to open up, as the chain counted on simply expanding its respected brand into new MSAs (metropolitan statistical areas) to scale revenue.

Perhaps surprisingly, the loss of customers due to well-publicized E. coli and novovirus outbreaks didn't curb expansion plans. Even when it filed Chipotle's 2015 annual report in February of this year, management stuck to its forecast of 220 to 235 stores to be opened in 2016.

Under Chipotle's old model, such a number hardly required any decision making – new stores not only bring in more revenue, they expand the base over which the company's fixed costs are spread, thus increasing restaurant margins over time. And the company's development activities are relatively efficient. If you scan that 2015 annual report, you'll see that pre-opening costs -- the aggregate of costs to get new stores up and running -- only amounted to about $17 million last year. That's a smidgen of a cost in relation to Chipotle's $4.5 billion in 2015 revenue.

But Chipotle's present reality, in which its food inventory on any given day exceeds demand, has originated a new cost to contemplate.

If customers are but trickling back in, and comps are so weighed down that the company is operating at a loss, then those new stores, far from being an incremental revenue and profit generator, morph into a P&L drag. In other words, they're very likely contributing to Chipotle's overall losses, and eating into operating cash flow. It's valid to question if the company should keep pushing openings without committed customer traffic.

A related cost that bears scrutiny is the opportunity cost of management's time and attention to expanding the company's store base by roughly 11.5%, when its current procedural imperative is to lock down food safety throughout its supply chain, central commissaries, and individual restaurants.

The current-year pipeline was likely committed by mid-2015. Still, the cost of breaking some leases and writing off associated development costs to slow expansion in 2016 might be acceptable, when weighed against the overall earnings drag of new launches, and the cost of executive attention.

Reasons to keep signing leases
Of course, management has cogent reasons for wanting to keep location additions from being the final victim of its current business quagmire. Delaying entry into markets is tantamount to conceding market share. Cancelling or passing on leases in prime locations until the company regains its momentum has its own risks, as delays have the potential to lock Chipotle out of high-traffic locations in which the company's desired demographic customers reside.

The executive team may have decided that it's willing to risk losses now to get situated in target markets for the day that sales recover fully. This wouldn't be a stretch for a group which prides itself on making decisions through the lens of long-term sustainability. This is roughly the thinking behind Co-CEO Steve Ells' answer to an analyst's question on the topic in February:

We expect that we are going to bring our customers back. And we would not want to be in a position where we slow the pipeline for 2017, finding that our sales have recovered, and then not have the opportunity to satisfy the demand as we have had in years past. So we feel it is prudent to stay on course with our existing plans of expansion.

While this sounds reasonable, if the first-quarter loss is significant, it will have implications for the length of Chipotle's recovery, which already seems to be a discussion of years rather than business quarters. And since the 2016 pipeline is apparently fixed, it's debatable whether the 2017 pipeline needs to be as robust as management thought as recently as early February.

It bodes well for the fast-casual chain that its management team is seasoned and capable. But executives need to either reduce Chipotle's operational and opportunity costs sunk within its location opening schedule, or build a rational case for proceeding full steam ahead. Next week's earnings call with analysts would be an opportune venue to make the case either way.