Surprisingly, the fast-food pizza chain has been one of the biggest winners on the market in recent years.

On a list of top restaurant stocks, most investors would probably be unlikely to name Domino's Pizza (DPZ 3.08%), but the delivery chain has quietly returned an eye-popping 5,000% since the recession.

While many of its fast-food peers have struggled to fend off the rise of fast-casual competition, the pizza-delivery leader bucked the trend by expanding internationally, improving operations, and leveraging its brand through franchising. The following chart shows the strong earnings and soaring stock price in recent years. 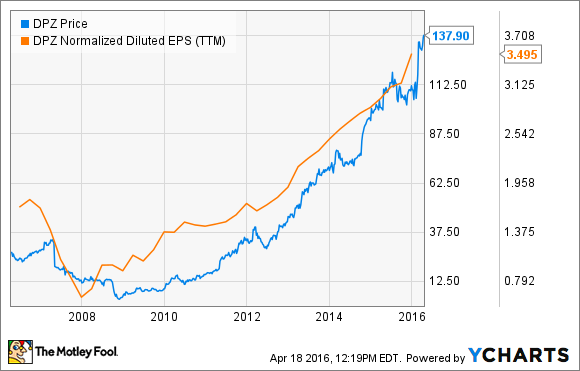 That turnaround didn't happen by accident. Here are the keys to Domino's surprising comeback.

Improving the product
Domino's is ubiquitous today, with 12,500 locations in 80 countries, but with falling profits, the company and the menu often maligned, it decided to relaunch the brand in late 2009. The company reformulated its pizza recipe and has changed most of its menu since then, introducing new items such as Handmade Pan Pizza and Specialty Chicken.

Customers noticed the improvement in the pizza quality, and in a memorable ad campaign, Domino's CEO Patrick Doyle admitted that customer criticisms, including that the old pizza tasted like cardboard, were valid. He encouraged disappointed customers to give Domino's another chance, lending credibility to the company's new recipe.

Domino's isn't the only restaurant chain to revitalize sales by reformulating its product. Under the auspices of activist investors, Darden Restaurants enhanced many of the company's recipes by doing things as simple as adding salt to the pasta. The results have been impressive, with steadily improving same-store sales and a resounding gain in the stock price.

Enhancing operations with technology
As technology has proliferated further into daily life, Domino's Pizza has used innovations such as digital ordering to make the user experience easier and more convenient. Today, 50% of sales come through online platforms like the Domino's app and website.  The company launched online ordering in 2008, and took operations in-house in 2010, introducing mobile apps and later a voice-ordering application. The company also created the Domino's Tracker, which allows customers to follow their pizza from the oven to their doorstep.

A new rewards program started last year complements the company's digital platform. Domino's also has a new point-of-sale system, called PULSE, that has added operational efficiencies. PULSE is now in use in almost all domestic stores and 60% of international locations.

Adding new stores
With the momentum from the menu reboot in 2009 and 2010, Domino's began rapidly adding new stores, opening nearly 3,000 new locations in the past four years, the vast majority of which were overseas. Though over the past decade quick-service pizza has been a slow-growing market in the U.S., Domino's sees opportunities internationally. The company believes the international pizza delivery market is underdeveloped and lacks strong competition.

Domino's now has 7,330 stores outside of the U.S. The company's presence is particularly strong in India, the U.K., and Mexico which all have more than 500 locations. Domino's international stores are operated through master franchisee agreements in which one franchise controls a large territory and often sub-franchises to other operators. One such franchisee, Domino's Pizza Enterprises, controls 1,561 restaurants in six countries. The franchise model also benefits the company as franchisees are a guaranteed customer of its supply chain, the source of a majority of the company's revenue, along with royalties.

Will the winning streak continue?
Domino's Pizza stock jumped again in its most recent earnings report as adjusted earnings per share increased 26% and domestic same-store sales grew 12% for the year. The key sales metric has improved steadily as Domino's has invested in product and technology improvements. Same-store sales growth has been better than 5% in each of the last three years, and increased each time. That kind of track record is rare in the restaurant industry and points toward continued growth for the pizza chain. International same-store sales have improved for a remarkable 22 years in a row, another sign of the brand's strength.

The market has caught onto the company's steady growth, pumping the stock's P/E ratio up to 40. However, with ample room for expansion abroad and impressive same-store sales growth momentum, Domino's stock could easily continue to buck the odds and keep moving higher.