Please ensure Javascript is enabled for purposes of website accessibility
Log In Help Join The Motley Fool
Free Article Join Over 1 Million Premium Members And Get More In-Depth Stock Guidance and Research
By Evan Niu, CFA - Apr 21, 2016 at 10:00AM

And you thought the hardware business was undervalued.

Well, maybe not you, per se. But it's highly likely that investors and the broader market are undervaluing Apple's (AAPL 4.08%) booming services business. That's a notion that Piper Jaffray analyst Gene Munster recently suggested.

Apple has long traded at a discount to the broader market as its growth prospects have been called into question, but it doesn't make much sense to apply this same low valuation to Apple's services business, particularly when you acknowledge the valuation discrepancy between Apple and Alphabet (GOOG 4.16%) (GOOGL 4.20%).

By Munster's estimates, applying multiples comparable to Alphabet to Apple's services business could value it at $264 billion.

$21 billion and counting
You might not realize it, but Apple's services business is growing like a weed right now. Services revenue last year was $21.2 billion, up 15% from 2014. Annual services revenue was just $13.5 billion as recently as 2012. 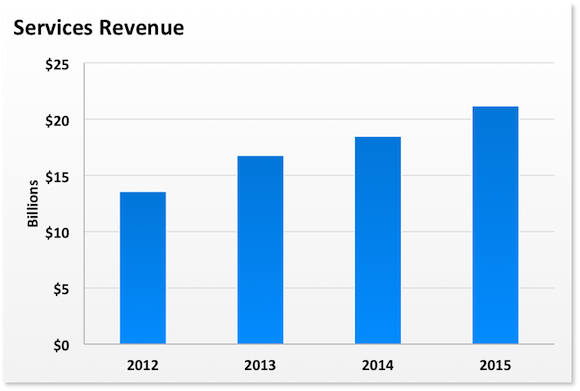 Note that Apple offers many of the same cloud-based services that Google does. Both companies use services as a way to support their core businesses -- device sales for Apple and advertising for Alphabet -- but these services are still independently monetized in many instances.

For example, here are just a few services that both companies offer that can be directly monetized, and aren't just free for strategic purposes (such as basic things like email or calendars):

There are areas that don't overlap. Apple offers AppleCare, its extended warranty plan for its hardware, which doesn't apply to Alphabet. Google's YouTube is testing out a new YouTube Red video streaming service for $10 per month, which includes some music benefits but Apple has nothing comparable.

Munster's estimate that Apple's services business could be worth $264 billion is pretty wild in the context of Apple's current market cap ex-cash of $420 billion. And you thought the hardware business was undervalued before.

What's next for the Mac maker?
Apple Music also marks an important strategic departure for the Mac maker. The company generally prefers to tie its services to its hardware. Of course, famously bringing iTunes to Windows was a big step, but most Apple services are still generally specific to Apple devices. But Apple opened up Apple Music to Android late last year. There's also been plenty of rumors that Apple is trying to build an over-the-top TV streaming service, but has yet to put all the pieces together.

All told, Apple's services business is booming. Maybe it's time investors started treating it that way.