Las Vegas Sands and Garmin’s big dividend yields could be too hot to handle.

Income investors often gravitate toward stocks with the highest yields, but big payouts can be unsustainable over the long term. To check if a stock's dividend is in trouble, investors should check the free cash flow (FCF) payout ratio, or the percentage of the FCF paid out as dividends over the past 12 months. If that figure exceeds 100% and FCF is declining, there's a good chance that the dividend could be cut.

Las Vegas Sands
At first glance, Las Vegas Sands' forward dividend yield of 5.5% looks tempting. But over the past 12 months, the casino operator has paid out nearly 100% of its FCF as dividends. The company believes that growth at its casinos in Macau and Singapore will boost its cash flows again, so the payout ratio falls to more manageable levels, but the 5-year chart shows a clear decline in FCF growth. 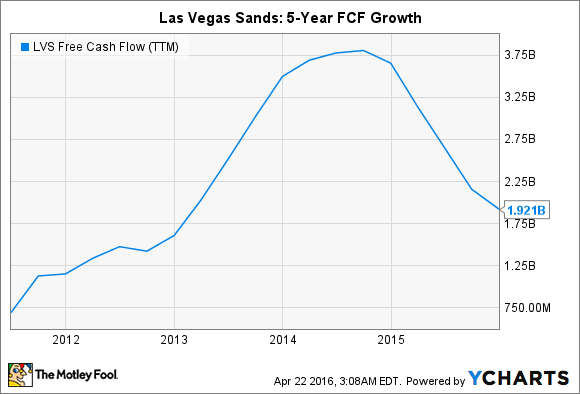 Much of that decline can be attributed to the Chinese market, where tighter regulation of casino and junket operators, a crackdown on corruption, and an economic slowdown have dulled its competitive edge. Las Vegas Sands' dismal first-quarter report reflected those challenges, as revenue fell nearly 10% annually to $2.72 billion and missed estimates by $160 million. Overall gaming revenue fell 13%, with revenue at all four of its Macau properties and Singapore's Marina Sands posting year-over-year declines. The only bright spot was Las Vegas, where sales rose 2% and accounted for 14% of overall revenue. Adjusted net income declined 33% to $357.3 million, or $0.45 per share, which missed estimates by $0.17.

The company also didn't offer forward guidance due to uncertainties regarding the Chinese market. Rising competition from Wynn and MGM's new Macau resorts, which will open later this year, could also cause more pain for its top properties. Looking ahead, analysts believe that Sands' annual earnings will fall nearly 4% over the next five years -- indicating that FCF levels could fall and its three-year streak of dividend increases could come to an abrupt end.

Garmin
Garmin's diverse portfolio of GPS devices and wearables might make it look like a more stable play on the wearables market than Fitbit. However, its 4.8% forward yield might not be sustainable over the long term. Over the past 12 months, the company has paid out a whopping 193% of its FCF as dividends. The company's FCF has also declined considerably over the past five years, due to smartphones gobbling up its core GPS device market. 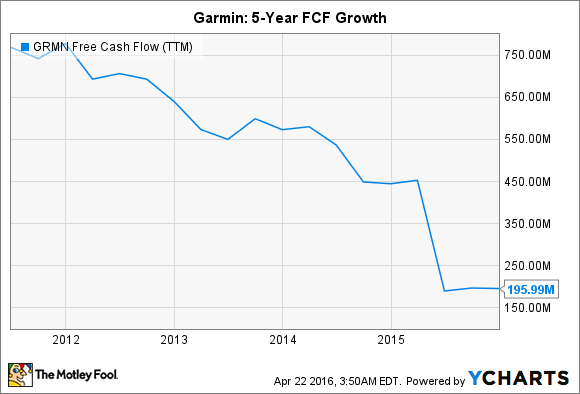 Last quarter, Garmin's revenue fell 3% annually to $781 million, but beat expectations by $20.9 million. Sales of its automotive navigation device revenue fell 21% annually to $268.5 million, but growth in the fitness, outdoor, aviation, and marine units partially offset that decline. Garmin hopes that sales of its fitness-tracking Vivo devices and its acquisition of DeLorme, a maker of satellite-tracking devices, will diversify its business away from car-based GPS devices, but the company still expects sales growth to remain flat for the year. Net income fell 37% to $132 million, which translated to "pro forma" earnings of $0.74 per share, beating expectations by $0.26.

Analysts currently expect Garmin's annual earnings to rise about 7% over the next five years. Unfortunately, that growth probably won't be sufficient to reduce its FCF payout ratio to sustainable levels, indicating that its four-year streak of annual dividend hikes could end.

Chasing high yields could be hazardous
High yields are great for generating income when they're supported by sustainable free cash flow growth and payout ratios. Unfortunately, Las Vegas Sands and Garmin don't make that cut, and their dividend growth could grind to a halt. Moreover, Las Vegas Sands and Garmin have both underperformed the broader market over the past year, which nullifies their dividend-based gains. Therefore, investors looking for better high-yielding dividend stocks might want to look elsewhere.