Please ensure Javascript is enabled for purposes of website accessibility
Log In Help Join The Motley Fool
Free Article Join Over 1 Million Premium Members And Get More In-Depth Stock Guidance and Research
By Lee Samaha - Apr 22, 2016 at 10:39AM

The 3D software maker outlined a solid set of results, but its growth is not going to be as linear in the future.

Having previously outlined that growth would be back-end-loaded in 2016, France-based 3D software company Dassault Systemes (DASTY 3.60%) was under pressure to deliver in its first-quarter results. Any kind of revenue or earnings miss and the market would have fretted over the company's prospects in the second half. Fast-forward to the results, and management delivered what they said they would; however, they may not have delivered exactly what the market wanted.

Let's take a look at the details.

Observant readers will note that non-IFRS EPS was significantly above guidance. Don't get excited, because EPS received a 0.05-euro boost from a tax reserve reversal. Nonetheless, when adjusted for the tax reversal, non-IFRS EPS came in one cent ahead of the top range of guidance -- a good result.

Guidance
In spite of some increased currency headwinds, management reaffirmed expectations for the full-year 2016, and predicted a pickup in growth in the second quarter:

As noted above, management believes that this year will see more pronounced quarterly seasonality in results. Specifically, the first- and third-quarter results are expected to be relatively lower than in previous years, while the fourth quarter is expected to be stronger than usual. Again, this puts pressure on the upcoming results to deliver, especially because guidance implies an increase in growth:

As you can see above, the guidance implies an increase in constant-currency revenue growth from 5% in the first quarter to 5% to 6% in the second.

Future growth
Frankly, it all looks pretty much in line with previous guidance. But here's the thing: New license revenue growth actually turned negative in the first quarter.

New licenses matter to Dassault Systemes -- they matter a lot. Despite only making up 26% of revenue in 2015, they are the key to future growth. As you can see below, new licenses create future demand for periodic licenses, maintenance, and services growth. 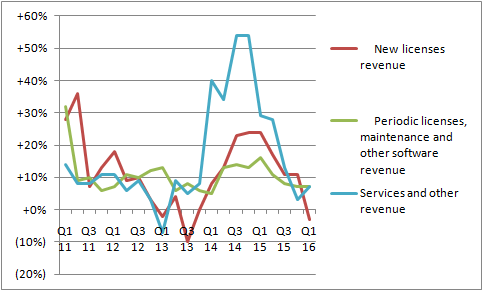 In discussing the decline in new license revenue, CFO Thibault de Tersant explained, "As anticipated, new licenses revenue results reflected a high comparison base as well as our expectation of a more back-ended year of investments by our clients." He went on to reaffirm full-year guidance, while on the earnings call he forecast a return to new license growth in the second quarter.

However, the decline in new license growth in the first quarter calls into question management's previous guidance for full-year double-digit organic new license revenue growth for 2016. All of which raises the question: Why is Dassault seeing increased seasonality in its results?

Analysts asked this on the earnings call, and CEO Bernard Charles said that the back-end loading "aspect is really the fact that it's a combination of the higher mix of 3DEXPERIENCE." Essentially, it's a business experience solution that requires customers to make substantive adoptive processes -- hence revenue delays. It's a plausible argument, but investors will want to see the hard numbers in future quarters.

Looking ahead
Anticipating the second-quarter results, it's clear that Dassault needs to get back to positive new licenses sales growth in the second quarter, and convince the market that its full-year targets are going to be, at the very least, achieved. The increased seasonality will make its results more variable, and investors need to be prepared.