Not that the consumer market is the software giant's bread and butter, but it's still encouraging to see the software giant continue to make progress there. Specifically, two of Microsoft's most important consumer-oriented businesses are on a streak of successes: Surface and Office 365.

Surface is small but growing
Surface has been something of a sleeper hit for Microsoft, and Surface revenue has jumped to $1.1 billion on the strength of Surface Pro 4 and Surface Book. That's up 55% from a year ago; on a constant currency basis, sales would have been up 61%.

Surface Book is one of Microsoft's many bets on the rising popularity of detachable form factors, and it appears that it's paying off. This is still a modest business in the grand scheme of Microsoft's consolidated results, but it's definitely growing.

Office's shift to subscription is going extremely well
More important, Office 365 consumer subscriptions are absolutely soaring. Microsoft now has 22.2 million subscribers, up from 12.4 million in the year-ago quarter. Zooming out a little bit more, we can see just how well the transition to a subscription model has performed. 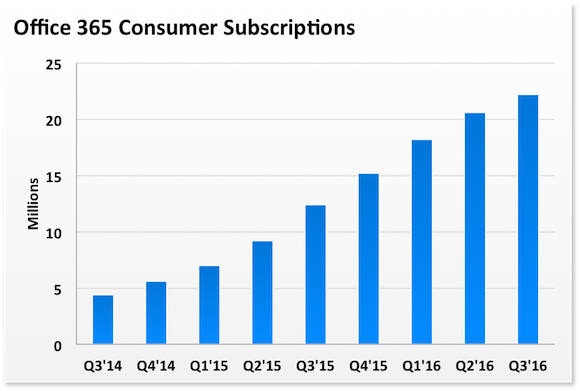 The shift has always represented an important new strategy, giving far greater visibility for the Office business than asking consumers to pay for new licenses every few years. Instead, Office can just constantly evolve and iterate while consumers generate recurring revenue.

Keep in mind that this is all on the consumer side. What has always been Microsoft's bread and butter is the enterprise, where Office 365 commercial seats jumped 57% last quarter.