Why these stocks fell hard on Friday.

Broader indexes barely budged on Friday even as tech stocks fell thanks to disappointing earnings results from a few of the industry's biggest players. The Dow Jones Industrial Average (^DJI 0.00%) gained 22 points, or 0.1%, and the S&P 500 (^GSPC 1.86%) finished flat at 2,092 points: 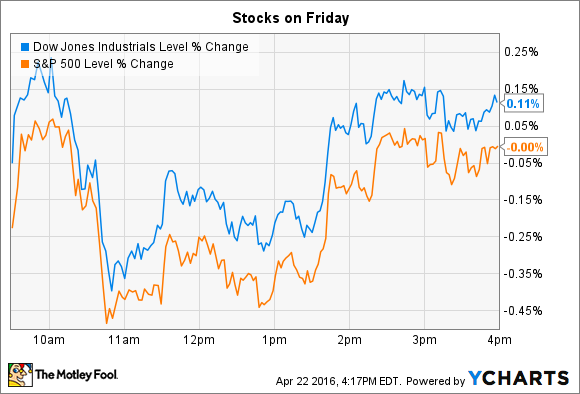 Starbucks sets a new record
Starbucks' stock fell 5% even as its report showed impressive operating momentum across the board: Sales, profit margin, and earnings all set new records for the coffee titan in fiscal Q2. Overall revenue climbed 9% and earnings soared 18%, with both the top and bottom-line figures meeting consensus estimates.

As usual, comparable-store sales growth led the way. Comps were up 6% as customer traffic rose 2% and average spending improved by 4%. Sure, that marked a deceleration from the prior quarter's 8% comps growth (split evenly between traffic and average spending), but it was still Starbucks' best Q2 yet. In fact, even the slower 2% traffic growth pace translated into 16 million additional customer visits over the three-month period globally – 12 million in just the U.S. market.

Meanwhile, the packaged goods business continued to flex its financial muscles, booking 8% sales growth as operating margin jumped to 40% from 37% a year ago. "Starbucks record Q2 financial and operating performance...underscores the strength of the Starbucks brand and the resiliency of our global retail and CPG businesses," CEO Howard Schultz said in a press release. The company affirmed its full-year outlook as well, which suggests the stock decline was mostly a function of Starbucks' expensive 40 price-to-earnings valuation, and not a reflection of worsening growth prospects .

Boston Beer loses ground to competitors
Craft beer specialist Boston Beer (SAM 0.68%) fell 8% to set a new 52-week low after announcing surprisingly weak first-quarter results before the opening bell. Sales fell 5% as increased prices couldn't offset declining demand for its products. Meanwhile, net income was nearly cut in half, which translated into earnings per share of just $0.55 compared to $1.04 in the prior year.

Management was surprised on both of these fronts. "We believe Samuel Adams has lost share due to the increased competition and continued growth of drinker interest in variety and innovation," CEO Jim Koch said in a press release. "Our total company [growth] trends declined in the first quarter, even as the better beer and craft categories appear healthy," he continued  .

The new reality is forcing big changes at Boston Beer, including cost cutting initiatives that aim at returning the company to steady profit growth. Koch and his team plan to step up product and marketing investments to help its brands stand out more from the surge of new brewer competition. In the meantime, investors can expect 2016 revenue and earnings to come in significantly lower than management initially projected.