Please ensure Javascript is enabled for purposes of website accessibility
Log In Help Join The Motley Fool
Free Article Join Over 1 Million Premium Members And Get More In-Depth Stock Guidance and Research
By Ryan Vanzo - Apr 23, 2016 at 9:15AM

A perpetual promise of higher prices meets the reality of oversupply and tepid demand.

For years, investors have anticipated an eventual rise in uranium prices. Since 2013, Cameco Corporation's (NYSE: CCJ) management team has touted the belief that the "long-term outlook for the uranium industry is very strong, despite current market uncertainty." Uranium prices remain perpetually weak, however, continuing a slow drift downward that started in 2008.

Will miners such as Cameco ever get to benefit from a rebound in uranium prices?

Rosy projections
J.P. Morgan estimates that uranium prices will more than double by 2020, based on classic supply and-demand dynamics. By 2035, the world's energy demand is expected to grow by nearly 50%. Much of that demand will be met by building nuclear reactors. For example, according to Barron's, "China's annual uranium needs will roughly double by 2020, outpacing the rest of the world's combined growth." By 2025, Cameco expects to see around 113 new reactors built, more than 60 of which are under construction right now. Demand should also be buoyed through capacity additions at existing plants. In all, 80 gigawatts of nuclear power may be added to the world's grids over the next decade, with continued growth expected beyond 2025.

While demand is expected to steadily grow, supply may have a tough time keeping up. Uranium mines can take up to a decade to reach full production, and with weak prices, the industry has been plagued with cancelled or delayed projects. Already, new supply is being outpaced by demand. According to Cameco, "about 10% of total supply required over the next decade will need to come from new mines that are not yet in development." Long lead times and prohibitive costs should lead to tightening supply (and higher prices) if the industry's demand assumptions prove correct.

Why haven't prices rebounded, then?
Two temporary phenomena are happening in the uranium market.

On the demand side, the 2011 Fukushima disaster -- which saw three reactors melt down following an earthquake and tsunami -- has dented demand growth in many OECD countries. For example, before the disaster, nuclear accounted for 22.4% of Germany's national electricity. Eight of the 17 operating reactors in Germany were permanently shut down following Fukushima, with the government announcing that it would close all of its nuclear power plants by 2022. The U.S. faces similar fears; no new reactor has been brought online since 1996 (although four are currently under construction).

Long-term, these supply headwinds shouldn't matter that much. World electricity demand is almost completely driven by non-OECD growth, with a majority of new reactors anticipated to come from places such as China, India, and Russia. 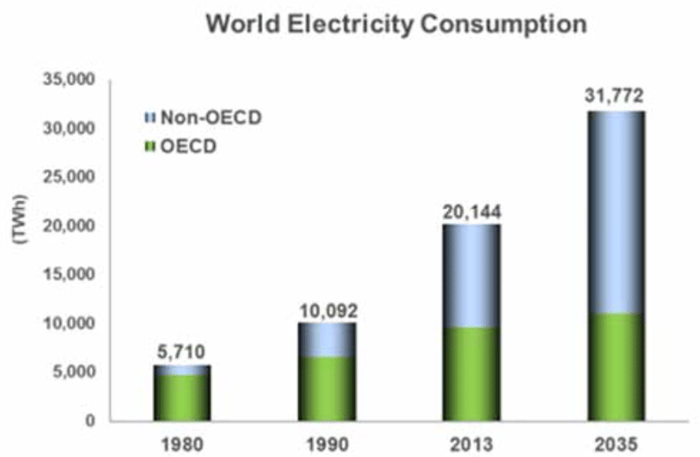 On the supply side, existing reactors have been able to cheat the system by using secondary supplies -- uranium that is already out of the ground and sitting in stockpiles around the world. According to Cameco, "about 20% of global supply comes from secondary sources, but those stockpiles are being drawn down and are expected to contribute less and less over time." Only 35% of uranium consumed over the past three years has not been replaced under long-term contracting. If you're a long-term shareholder, this issue should resolve itself in the coming years. 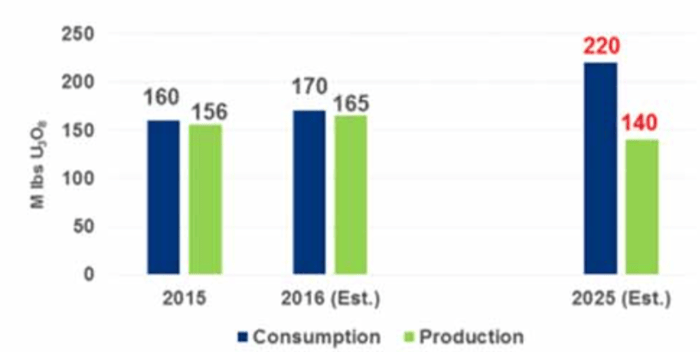 How high could prices go?

The uranium spot market is already pricing in a big rebound. Today, prices trade at roughly $35 a pound. By 2017, the futures markets trade at $45 a pound. By 2018, $55 a pound. For Cameco, this could have a huge impact on earnings. Because the company operates on a mix of spot and long-term contracts, it typically realizes higher prices than do companies operating completely on the spot market. With the price at $60 a pound, profits could roughly double. By 2020, uranium prices have the potential of hitting $100 a pound or higher.

If you're willing to wait out the temporary supply and-demand headwinds, Cameco would be a solid long-term holding. Despite falling spot prices, the company has been able to boost its realized selling price all while maintaining steady production costs. In 2016, management expects to produce 14 million pounds, up from 13.3 million pounds last year. Production should continue to rise given Cameco's 410 million pounds of proven reserves, 377 million pounds of measured reserves, and 381 million pounds of inferred reserves. Most production gains should continue to come from the same low-cost assets. As spot prices rise, profitability should magnify given this steady cost base. If you want to play the long-term movement of uranium prices, Cameco looks like a great option.