Please ensure Javascript is enabled for purposes of website accessibility
Log In Help Join The Motley Fool
Free Article Join Over 1 Million Premium Members And Get More In-Depth Stock Guidance and Research
By Sean Williams and George Budwell - Apr 23, 2016 at 11:42AM

Marijuana is one of the fastest-growing industries in the U.S., but also one of the most tightly regulated. Can investors find a way to profit in this industry?

Investors have quite the dilemma on their hands. In one corner, marijuana is one of the fastest-growing industries in the United States. ArcView Market Research estimates legal sales can grow at a compound annual rate of 30% between 2016 and 2020. In the other corner, we have an idle group of lawmakers in Washington, D.C., who are stymieing the industry's efforts to expand and profit.

So which side will win out? For that answer, we asked two of our regular contributors on the legal marijuana debate for their opinion on whether marijuana stocks could succeed without the support of the federal government. Here's what they had to say.

Sean Williams
Marijuana has been expanding at an incredible pace at the state level, but President Obama and Congress have made it pretty clear that the federal government has little intention of addressing marijuana in 2016 (and perhaps even beyond this year). This is bad news for the few publicly traded marijuana stocks that you and I can buy.

To be specific, continued inaction at the federal level creates three inherent disadvantages that are dooming marijuana stocks.

Second, even though the federal government considers marijuana an illicit substance, the Internal Revenue Service has no qualms about requiring marijuana businesses to pay corporate income tax. Worse yet, because they sell a substance that's illegal, U.S. tax code 280E allows the IRS to deny these businesses the option of writing off normal business expenses, such as rent. In short, marijuana business' taxes are much higher than those of regular businesses.First, the fact that marijuana remains a schedule 1 drug at the federal level means banks generally want nothing to do with the industry. Even in states where banking workaround laws are in place, most banks fear potential federal prosecution further down the road and have simply avoided the industry. Without access to basic banking services, such as checking accounts and lines of credit, marijuana producers and distributors could struggle to grow.

My suggestion is, and will continue to be, to avoid marijuana stocks entirely until the federal government changes its tune.

George Budwell
While I agree with Sean for the most part, I think there's one possible exception to the rule that marijuana stocks should be avoided: the handful of companies working on marijuana-based medicines, headlined by the British biopharma GW Pharmaceuticals (NASDAQ: GWPH). After all, GW recently reported positive late-stage results for its marijuana-derived medicine Epidiolex in a rare but severe form of childhood epilepsy called Dravet syndrome, causing its shares to skyrocket: 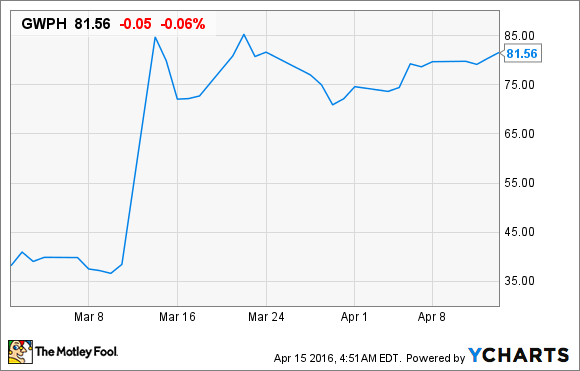 Specifically, GW reported that Epidiolex produced a statistically significant reduction in the number of monthly seizures in patients with Dravet syndrome compared to those receiving a placebo in the study. This study provides some of the first compelling evidence that marijuana-based medicines can indeed be effective treatments for life-threatening conditions.

Looking ahead, GW is currently assessing Epidiolex in a second late-stage Dravet syndrome study, along with two other late-stage trials for another rare form of epilepsy known as Lennox-Gastaut syndrome. Taken together, these four pivotal-stage studies have the potential to provide a solid empirical foundation that marijuana-derived drugs can be safe and effective treatments for diseases with limited therapeutic options.

Before we get ahead of ourselves, though, it's important to note that GW still faces a significant regulatory hurdle before the U.S. Food and Drug Administration will approve the drug for its childhood epilepsy indications. And that hurdle may be much harder to overcome than many realize.

The FDA currently has little experience with these types of drugs, and the agency's own website seems intentionally vague when it comes to its actual stance on marijuana-based medicines. As such, the FDA could end up setting an extraordinarily high bar in terms of safety and efficacy for Epidiolex -- perhaps just to cover its bases in case an unexpected adverse event pops up down the line.

On the bright side, the FDA has been willing to authorize expanded access to Epidiolex for certain patients during the drug's ongoing clinical studies, demonstrating that the agency does at least recognize the dire need for new therapies for these severe forms of epilepsy.

GW's forthcoming data releases for Epidiolex could finally validate marijuana-based drugs as a whole -- at least from a scientific viewpoint. Until then, however, I would advise caution with these risky stocks, as there's no guarantee that these novel marijuana-based therapies will ultimately live up to the hype.

Where do you stand on investing in marijuana: Smart idea or money pit?