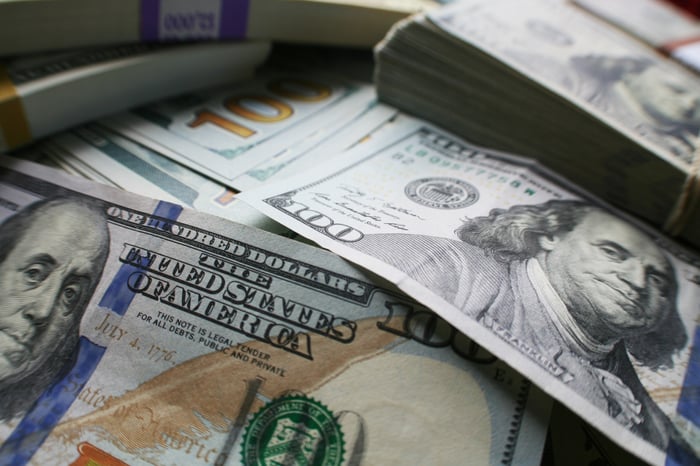 There are two main ways that companies can return profits to shareholders: dividends and share buybacks. And while the idea behind both ways is to give money back to investors, the best method depends on a few things, such as the company's goals, valuation of the stock, and the investor's personal goals.

How companies use their profits

There are several things a company can do with its profits. First and foremost, it's important to make sure its current capital needs are met. For example, if it needs new equipment or has to invest more money in research and development to stay competitive, this should be the No. 1 priority.

Additionally, it can choose to use its capital to acquire other businesses. This has been the main reason Warren Buffett has been so successful -- after the capital needs of Berkshire Hathaway's existing operations are met, he strategically invests in additional businesses and stocks.

Or a company can choose to do nothing with its profits and build up a stockpile of cash. Apple is a well-publicized example of this, sitting on a mountain of more than $200 billion.

Finally, it can choose to return some of its profits to shareholders, and there are two main ways to do this. It can opt to pay a dividend, which simply means giving each shareholder a cash (or stock) payment for each one of their shares. Or it buys back some of its own shares, which reduces the total number of outstanding shares, making the remaining shares more valuable as a result.

Benefits of dividends
The most obvious benefit of dividends is income. A dividend payment can put cash directly into investors' hands, which is a big perk for people who rely on their investments to help pay living expenses, such as retirees.

Furthermore, dividends give investors the option to use the distributed profits as they see fit. If they feel the stock is attractively valued, they can use their dividends to buy more shares, and if they do so through a dividend reinvestment plan (Drip), they won't even have to pay commissions. Or, if they would rather invest their profits elsewhere, they are free to do that as well.

Another benefit of dividends is that the gain is certain. In other words, if a company pays a $1.00 dividend, shareholders are getting exactly that amount of money. On the other hand, if a company uses $1.00 to buy back shares and the stock price falls by 50% over the next year, the effective distribution is reduced to just $0.50.

Why might buybacks be in shareholders' best interest?
Despite the perks of dividends, there are some reasons shareholders prefer buybacks.

First of all, they're often more favorable for tax purposes. Most dividends are taxed at a 15% or 20% rate, unless the stock is held in a retirement account. On the other hand, a buyback allows the entire amount of distributed profit to be reinvested for the shareholder's benefit, with no taxes due until the shares are sold.

Also, buybacks are flexible. Generally, a company's board of directors will authorize a buyback for a certain dollar amount. It can then use this amount whenever it sees fit or not at all. In other words, if the company runs into tough financial times, it can choose to scale back on its buyback program, while a dividend would have already been paid in full.

A buyback can also serve to increase earnings growth rates, which can result in the market placing a higher value on the company's shares. For example, if a company increases its profits by 5% this year, but buys back 2% of its shares, its earnings per share will increase by more than 7%, making the company appear to have more growth than it actually does.

Finally, a buyback can allow a company to take advantage of a perceived mispricing of its shares. For example, if a stock trades for $80 per share and the company believes the intrinsic value is $100, it can create instant value by buying its shares back for less than they're worth.

As an example of one of my favorite stocks right now, Bank of America (NYSE:BAC) pays a modest dividend but has a hefty $4 billion buyback authorization, as well as an additional $800 million to offset dilutive effects of employee stock incentives. At the time of this writing, Bank of America shares trade for just 86% of their tangible book value, so the company can repurchase its own assets for just $0.86 on the dollar, creating instant value for shareholders. And, it appears as if the company is taking advantage, as the bank repurchased $1 billion of its shares during the first quarter alone. As my colleague John Maxfield has written before, even though Bank of America could probably raise its dividend this year, it would be preferable to see the company place even more emphasis on buybacks while shares are so cheap.

On the other hand, AT&T (NYSE:T) chooses to emphasize its dividend, paying out more than 67% of its profits in the form of dividends during the past year. Taxation doesn't seem like much of an issue -- after all, AT&T is an extremely popular retirement stock, so much of the dividends likely go untaxed. In a nutshell, telecom investors generally prioritize income, so the company focuses on paying and growing its dividend, which it has done for 31 consecutive years.

So, there's no clear answer to the general question of which is better, but dividends and buybacks can be favorable for  individual companies and investors, depending on the situation.