It was a great week to have money in the healthcare sector.

It was a terrific week to have money invested in the healthcare sector, as the majority of the largest exchange-traded funds that focus on the space smashed the returns of the S&P 500.  Several of these ETFs gained more than 2% during the trading week, but that was nothing compared with the top-performing fund -- the PowerShares Dynamic Pharmaceuticals ETF (PJP 2.15%), which roared 3.7% higher during the period. 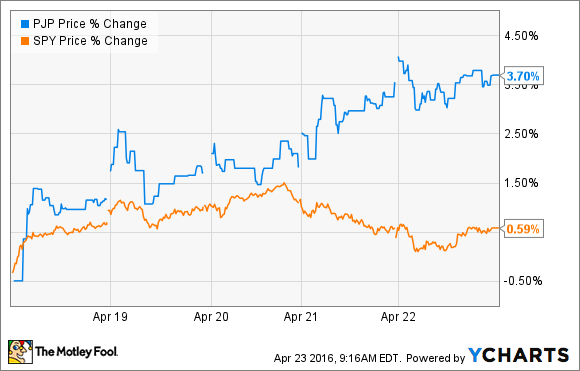 So let's take a closer look at this ETF to figure out why it outperformed this week.

As it name suggests, the PowerShares Dynamic Pharmaceuticals ETF invests the bulk of its assets in pharmaceutical companies. PJP is also quite concentrated, holding a position in only 23 companies.

While that may worry some investors, the fund does keep its assets in the biggest players in the space, which helps keep the fund's overall risk profile down. In fact, the average market cap held in this fund right now is a whopping $70 billion.

What worked this week?
While every single one of this fund's top holdings finished the week in the green, the entire fund was pulled up by the outperformance of one stock -- Heron Therapeutics (HRTX 5.66%). 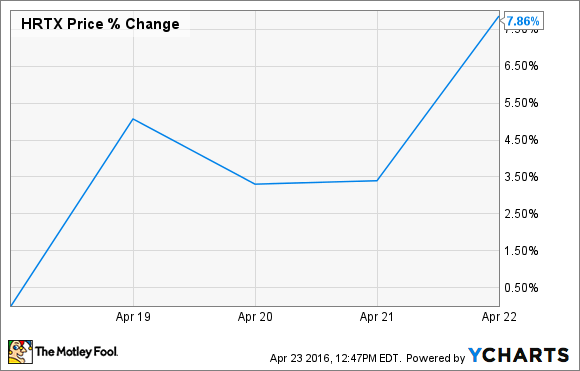 Heron Therapeutics stock rocketed higher this week after the company announced that there are no longer any remaining substantive deficiencies in its New Drug Application for Sustol, its drug that's awaiting approval for chemotherapy-induced nausea and vomiting, or CINV.

That news probably relieved many of Heron's investors, since the approval process for Sustol has been much more arduous than many had hoped for. The FDA has already rejected the drug twice, and the agency has extended its review of the drug. The troubles have weighed greatly on Heron's stock over the past few quarters, so traders reacted favorably to the good news. The company is currently in discussions with the FDA about the drug's labeling.

Some analysts are projecting that Sustol's peak sales could reach $400 million, but that estimate assumes that the drug's labeling is not overly restrictive. If the agency decides to greatly restrict the addressable market for Sustol, then that estimate could fall rapidly.

What's next for PJP?
This is the third time this year PJP has claimed the title of best-performing weekly healthcare ETF, which hints that the fund has found a winning strategy. Given that it provides investors with instant diversity at a modest cost, I think this could be a great choice for anyone who wants a little bit more healthcare exposure in his or her portfolio.