Airbus looks set to get some orders from Delta, but will Bombardier finally land the big sale it has been chasing?

In recent years, Delta Air Lines (DAL 3.43%) has gained a reputation for driving hard bargains on aircraft purchases. However, it is starting to replace older planes at a rapid rate as Boeing (BA 3.52%) and Airbus (EADSY 2.84%) have offered it great deals, particularly on models they are phasing out.

Delta appears to be on the verge of announcing one or two more orders. This may include yet another order for 192-seat Airbus A321s. But from the plane makers' perspectives, the bigger prize is a potential order for at least 75 smaller narrowbodies built by either Bombardier or Embraer (ERJ 2.10%).

The CSeries looks for a big victory
Bombardier has been desperate to land a "flagship" order for its new CSeries jet, which is scheduled to enter service a few months from now. Air Canada placed a firm order for 45 of the larger CS300 model earlier this year, but many industry observers have downplayed it as a politically motivated deal between the two Canadian companies.

Bombardier is still looking to get a marquee CSeries order. Image source: Bombardier.

By contrast, landing a big order from an airline like Delta would help validate the viability of the CSeries as a competitor to the dominant Airbus A320 and Boeing 737 aircraft families. Delta executives have praised the CSeries on multiple occasions in the past year, hinting that Delta might order it -- at the right price.

Earlier this month, Bloomberg reported that Delta was close to placing an order for 75 CSeries jets, with options for another 50. Still, there's no guarantee that Delta will go ahead with the deal. United Continental seemed to be close to ordering the CSeries a few months ago, but ultimately Boeing offered discounts too big to pass up for the 737-700.

Boeing probably isn't in the running this time. Embraer is Bombardier's main competition for the Delta deal, according to aviation consultant Scott Hamilton. 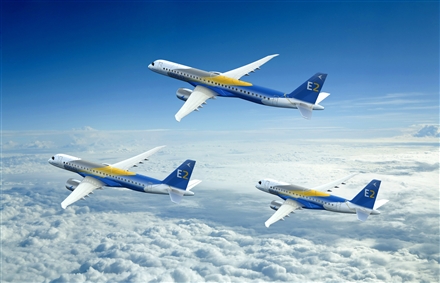 Embraer may try to undercut Bombardier on price with its E2-series jets. Image source: Embraer.

Embraer's E2-series jets use the same advanced engine technology as the CSeries. The 100-seat E190-E2 is scheduled for first delivery in early 2018, followed by the larger E195-E2 in 2019. Both models are slightly smaller than the competing Bombardier jets, but should be roughly equivalent in terms of unit costs.

Embraer has three major advantages on the cost front. First, it expects to spend $1.7 billion to develop the E2-series jets, compared to more than $5 billion for the CSeries. Second, the E2 jets are a derivative of the existing E-Jets line, which should keep production costs down. Third, labor costs are lower in Brazil. As a result, if Embraer makes an aggressive bid, Bombardier might be unable to match it profitably.

Airbus gets some orders, too
Airbus is also close to an agreement to sell 37 additional A321s to Delta, according to Reuters. Delta has previously ordered 45 A321s and it received the first one last month.

Airbus has stated previously that it plans to end production of the current-generation A321 by 2018. Assuming those plans still stand, Delta is likely to receive all of its incremental A321 orders in the 2017-2018 period.

Some of these A321s may replace the similar-sized Boeing 757-200. However, Delta already has 100 outstanding orders for planes in that size range, far more than the number of 757s ready to retire in the next few years. Thus, any incremental orders will end up replacing smaller planes, primarily the 149-seat MD-88.

Based on Delta's reported aircraft deals, the company seems to be looking to replace its MD-88s with a combination of smaller and larger planes. As noted earlier, the A321 has 192 seats. On the other hand, Delta would probably put about 135 seats on the CS300, while the CS100 and both Embraer models are even smaller.

Delta has about 115 MD-88s in its fleet today. Even without them, it would have more than 200 planes in the 149-160 seat range. That may be enough based on the size of Delta's markets.

Ordering a combination of smaller and larger planes could allow Delta to increase its unit revenue (by deploying smaller planes on routes with less demand) while keeping unit costs down (by adding larger, more cost-efficient planes on routes with sufficient demand). This should help it maintain its position as the most profitable of the three U.S. legacy carriers.