National Grid is a utility, but there's a lot more going on than that.

National Grid Transco, PLC (NGG 2.34%) isn't really a household name in the United States. But it's pretty well known in its home country of England. That said, the United States accounts for around 20% of the company's operating profit and eats up nearly half of its capital investment. So as a U.S. investor, you might be interested in National Grid's story... not to mention its roughly 4.7% yield. But you might also be wondering how safe the stock is. Here are a couple of things to consider.

Global-ish
There's no way around it: National Grid is a direct play on the utility needs of the United Kingdom. Roughly a third of its revenues come from its UK electricity business, and about 30% or so is derived from its gas transmission and distribution operations. So around two-thirds of National Grid's revenues are directly tied to utility issues in England.

If you're looking at National Grid, you'll want to keep this in mind at all times. It's very much a multi-utility, with a core operation in one region and expansion opportunities in others. That's where the 20% of the business tied to the United States comes in. It has a material footprint in the Northeast. In fact, roughly 30% of its utility assets are located in the U.S. market. As in the UK, National Grid's U.S. business spans electricity and natural gas. 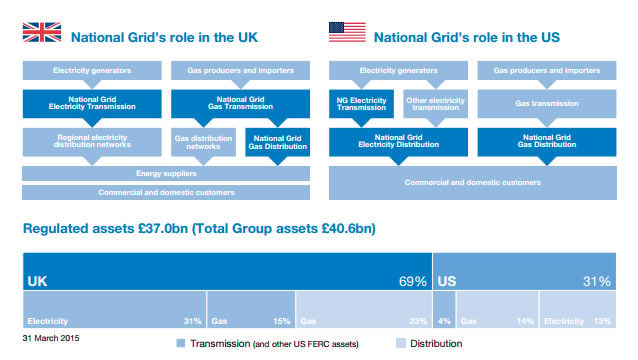 One other factor to keep in mind about National Grid is that it doesn't generate electricity, instead focusing on transmission. That means that it doesn't have to worry about building, maintaining, or fueling power plants. Which helps to reduce its exposure to often-volatile energy prices, a plus on the risk front.

Spending it, in the states
So even though you need to pay close attention to the UK if you own National Grid, you'll also want to watch what's going on in the United States. But here's where that story gets more interesting...

As a utility, National Grid is highly regulated. So governments basically set how much the company can charge customers. In exchange, National Grid gets monopoly privileges. It's a reasonable trade-off, since it would be prohibitive in multiple ways to have two different electric systems serving one area. The same is true in some of the company's gas businesses. Being a utility, however, National Grid can increase rates if it spends money to maintain and upgrade its systems.

Assuming regulators approve of the spending, which can be a contentious issue at times, National Grid makes more if it spends more. And when it comes to spending, the utility's U.S. business has been eating up a lot of cash -- around half of the company's capital spending -- slightly more, in fact, than its much larger UK businesses taken together. Basically, National Grid sees more growth opportunity stateside than it does in its home market.

So for investors, the U.S. business should get a little more attention when you consider growth. This is in line with National Grid's thinking, since the utility is specifically looking to up the profile of its U.S. assets. That makes sense since growth in the UK will be harder to come by based on the company's already notable size in what is a relatively small market.

That doesn't mean you should forget about the results of spending taking place in England, just that the spending in the U.S. is more important than the division's size within the company suggests. If that spending doesn't work out as planned, the U.S. could turn into a larger-than-anticipated drain.

A solid company
Now, those big-picture issues aside, National Grid is a fairly stable company. Debt makes up about 60% of the capital structure. That's not unreasonable in the capital-intensive utility space. For example, long-term debt at Southern Company (SO -0.14%) and Duke Energy (DUK -0.62%) makes up abut 50% of their respective capital structures. So National Grid is higher, but not out of line.

The top line, meanwhile, has been heading higher over the past three years, after a dip in 2012. Duke and Southern's revenue trends aren't any better. Earnings have been more volatile than revenues at National Grid, but the dividend has held up relatively well. Like revenues, it dipped slightly in 2012. That said, over the past five years, dividend growth has been about 3%. That's not something to write home about, though it does roughly keep up with the historical rate of inflation. 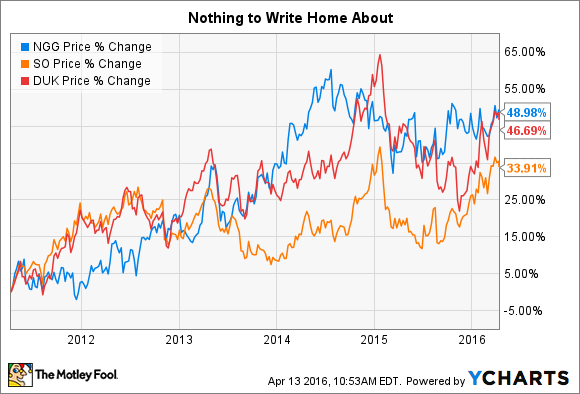 And to be fair, Southern and Duke are in the same ballpark -- though both have kept an upward dividend trajectory throughout that span. Here it's important to note that National Grid is a UK company, and they do dividends differently over there. Breaking it down, you'll get two dividends a year instead of four, and dividends tend to move with financial performance -- unlike the U.S., where consistency is preferred regardless of financial performance. And don't forget there are some tax issues involved with foreign income.

Geography matters
At the end of the day, National Grid is basically a boring utility. It's neither great nor awful. However, what really separates it is its geographic mix. If you just want a basic utility, National Grid is probably more than you're bargaining for. However, for someone who's interested in a little diversification, this UK/U.S. mash-up might be just the thing. Adding some allure to that is the fact that National Grid's electric assets are transmission based, so it doesn't have to deal with the power generation issues that many of its U.S. competitors face.