Please ensure Javascript is enabled for purposes of website accessibility
Log In Help Join The Motley Fool
Free Article Join Over 1 Million Premium Members And Get More In-Depth Stock Guidance and Research
By Daniel B. Kline - Apr 26, 2016 at 8:22AM

Charter Communications (CHTR 0.94%) has been playing the waiting game since last May, when it agreed to buy Time Warner Cable (NYSE: TWC) and privately held Bright House Networks.

The two deals, which value TWC at $78.7 billion and Bright House at $10.4 billion, both received final regulatory approval on April 25, but the Federal Communications Commission (FCC) certainly took its time making a decision. That put all three companies into a holding pattern, with Charter being under the most pressure since it will be the controlling entity after the merger.

In some ways, the pending deal put Charter into an extended period of semi-stasis. Yes, it had to run its operations, but it could not really do anything new until it knew what would happen with its acquisitions. That put the company in a position where it had to work to be ready to integrate over 11 million cable and 13 million broadband customers from Time Warner alone, while also operating its own business.

That situation does not really lead to much innovation, but now the FCC has approved the deal with expected and not onerous conditions. Going forward, the company will be judged by a whole new set of criteria, but for its Q1 results, which it reports on April 28 at 10 a.m. EDT, Charter should mostly follow recent industry trends. 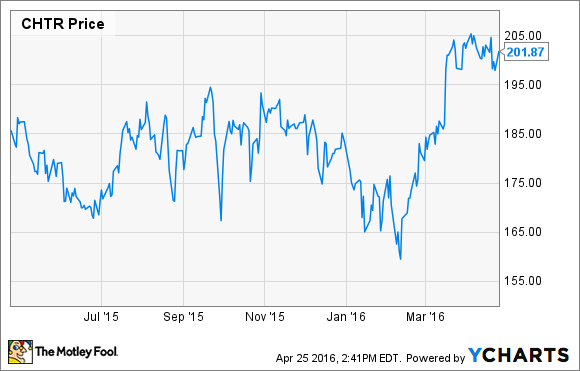 Charter's stock has gone in the right direction since approval of the merger started seeming imminent. Image source: YCharts.com.

Broadband should be strong
The rise of streaming services, which could ultimately hurt cable companies on the pay television side, has helped them greatly when it comes to adding broadband subscribers. Last year, the 17 largest cable and telephone providers in the United States, representing about 94% of the market, added 1.2 million broadband customers in Q1, according to Leichtman Research Group (LRG).

Charter accounted for about 136,000 of those Q1 adds and nearly 500,000 for the full year, during which the industry posted 3.1 million in total gains, according to LRG.

Because Charter is reporting a day after market leader Comcast, and at roughly the same time as future acquisition Time Warner Cable, investors have not yet had a preview of whether those growth trends will continue. But the market conditions behind the 2015 broadband growth have not changed, and Verizon, which lagged industry averages with only 23,000 new Internet customers in 2015, reported adding 98,000 in its first quarter.

Given the growth of streaming and the continued need for high-quality broadband, Charter should post growth numbers in line with last year.

Holding the line in cable
Pay-television subscriber counts should not be as positive as the broadband numbers, but fears of massive declines due to cord-cutting proved to be untrue in 2015. For the year, the entire industry lost only about 385,000 subscribers, according to LRG, with Charter actually bucking trends and posting a gain of 11,000.

Cord-cutting should be a concern for the combined company (which will be called New Charter) going forward, but there is no reason to believe anything big changed between the end of the year and the end of the first quarter. That means Charter is not likely to post major gains or major declines when it comes to cable customers.

The real surprises are ahead
With the quarter passing before the FCC's decision was made, Charter's report this week likely holds no surprises for investors, though the company faces huge risks and potential rewards going forward as it becomes one of the top-two cable and broadband providers.