Helmerich & Payne may be suffering like the rest of the oil & gas industry, but that isn't the whole story.

Life hasn't exactly been easy for Helmerich & Payne (HP 0.41%) over the last couple of years. Even though the company remains one of the top land rig contractors in the business, there just isn't a whole lot of work to spread around the business since the active rig count is now at the lowest point ever since we started keeping track back in the early 1960s. 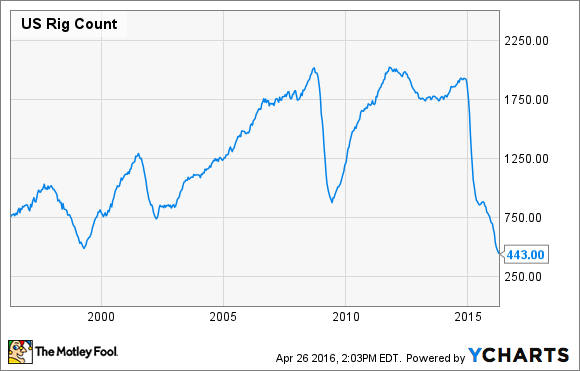 Despite the tough operating market, Helmerich & Payne's management has some important messages before you make any drastic decisions about this stock. Here are a few quotes from its last earnings conference call that you should keep in mind as the company approaches its earnings release date of May 2nd.

Brutal market persists
Like for just about every other oil services company, the downturn in oil and gas drilling activity has taken a deep bite out of Helmerich & Payne's earnings. Since most of the company's revenue generating assets are U.S. land rigs, it has taken a larger hit than other oil services companies that have more geographic diversity. Oil prices haven't really started to recover to a point that producers are running out to drill new wells, and Helmerich & Payne CFO Juan Pablo Tardio foresees the market for rigs deteriorating even further:

Good equipment is in demand in any market
As the market for rigs dries up, one of the immediate conclusions an investor might make is that Helmerich & Payne will lose some of its pricing power. Surprisingly, though, this wasn't the case last quarter.

That's certainly promising, and over the years, the company has been able to garner a market premium for its rigs thanks to its fleet of high-specification rigs. 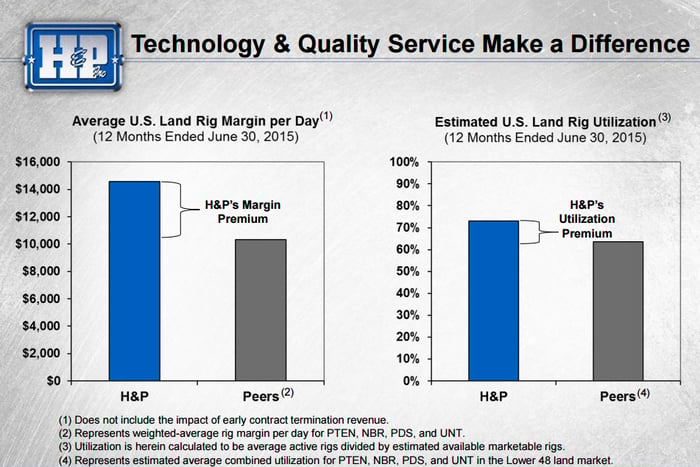 However, investors should be aware that management is preparing for this to not happen again as the market continues to weaken:

Unfortunately, as I'll also mention later, we expect the per-day impact of these ongoing efforts to be offset during the second fiscal quarter as our activity levels continue to decline. -- Tadio

We're in the middle of a major technology turnover
As horizontal drilling and hydraulic fracturing become a larger and larger component of the energy mix, it's making several older rigs obsolete. As CEO John Lindsay explains, it's having a noticeable effect on the fleet of rigs in operation.

I want to reiterate the challenging oil and gas market today that may be on par with the oil market in the 1980s. But there are key differences, and one big difference is the age, size and capability of today's rig fleet. The AC drive rig replacement cycle of the legacy fleet is ongoing. At the peak of activity in 2014, approximately 41% of the fleet was AC drive. And today, over 63% of the active fleet is AC drive technology. The remaining fleet is legacy SCR and mechanical rigs. And the question remains, what will be the marketable legacy fleet at the end of the downturn? We believe it will be a very small portion of the marketable fleet, and those rigs will have a very difficult time competing in the world of complex, unconventional horizontal wells.

We're in a good position for that change
This transformation to alternative current (AC)-driven rigs clearly plays into the company's strengths, as it has substantially grown its AC rig fleet and essentially retired other rig technologies. 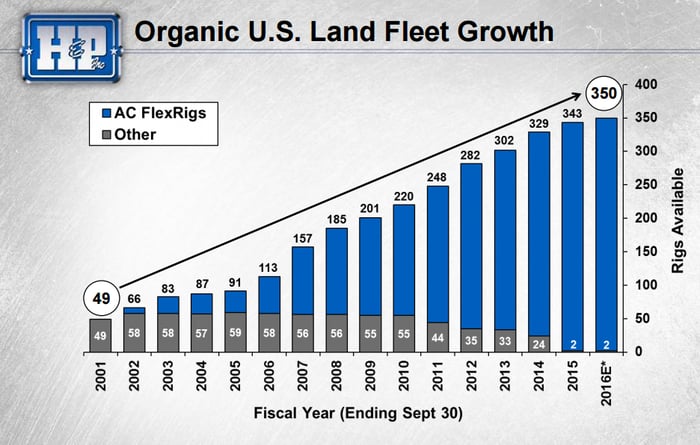 Another strategic advantage the company has is that, unlike many of its peers, it has not used debt to grow the business and now has a much cleaner balance sheet: 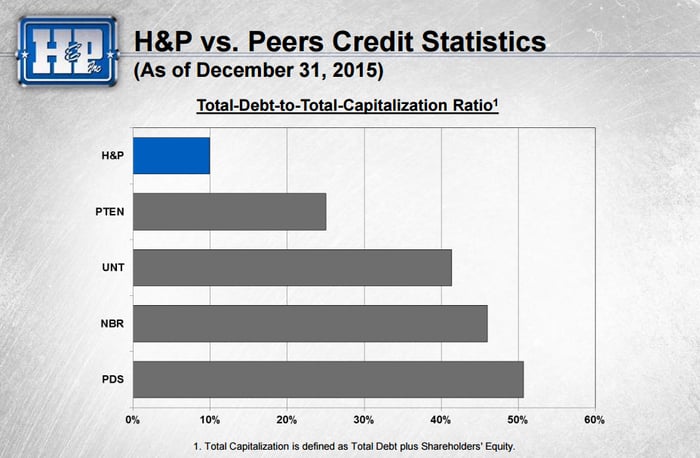 Considering these two components of the business, it's not too surprising that the company intends to use that position to its benefit over the next few quarters as we start to anticipate an eventual recovery of the industry.

At some point, the question will be who is in the best position for the eventual return of drilling demand. We believe that we will be well positioned and that this is simply not a time for us to hunker down and wait for things to get better. While continuing to thoughtfully manage costs, we will prudently invest in opportunities that will enhance the key competitive advantages we have as a company ... Our market share in the U.S. has increased from 15% in 2014 to 18% today and has doubled since 2008. -- Lindsay

We're still strong enough to keep our dividend in tact
Thanks to the company's prudent financial decisions and its strong competitive offering, Helmerich & Payne has been able to maintain a dividend streak going on 42 years now, making it one of the few dividend aristocrats in the energy industry. Still, the longer this downturn continues, concern is growing that the company won't be able to maintain its current dividend. At least for the time being, Tardio wants to alleviate those concerns:

Our strong liquidity position, along with our firm backlog of long-term contracts and reduced CapEx requirement, is expected to allow us to sustain our regular dividend dollar-per-share levels, and our intent is to continue with that plan.

The company only gives guidance on a quarterly basis, and if the upcoming quarters deteriorate even more, perhaps it will need to reconsider. Based on what management is saying today, though, investors can at least take solace in the fact that Helmerich & Payne is doing what it can to preserve its dividend streak.