Statoil reversed a trend of quarterly losses despite oil and gas prices remaining low throughout the first quarter of 2016.

After posting some heavy losses in 2015, Statoil (EQNR 0.75%) seems to be starting off 2016 on the right foot by posting a much better than expected gain in the first quarter. While the company suffered from lower oil and gas prices like so many other companies, it's starting to realize the effects of some moves the company made to lower its costs.

Let's parse through the details of Satoil's quarter and whether this surprising gain is the beginning of better times, or just a flash in the pan.

*Financial results prior to Q1 2016 are reported in Norwegian krone, and figures for this table were converted at the current exchange rate of 1 USD = 8.16 NOK. Data source: Statoil earnings release and S&P Capital IQ.

Looking at the results from Statoil's most recent quarter, they certainly aren't anything too impressive. When you consider that the company turned from loss in the previous sequential quarter to a profit in today's oil and gas environment, though, this quarter looks much better by comparison. The largest improvement for the company this past quarter was attributed to a $1.8 reduction in purchases costs. It also helped that the company's deprecation expense decreased by $1.9 billion. Other costs remaining relatively flat helped produce a decent turnaround for earnings per share.

On a business segment basis, there are a lot of common themes with other integrated oil and gas companies: Marketing and Refining results helped to make up for miserable performances elsewhere in the company. The company did note, though, that Marketing results were lower because of a 31% decline in realized sales prices of piped natural gas to continental Europe. Increasing supplies and a very mild winter were the largest reasons for this. 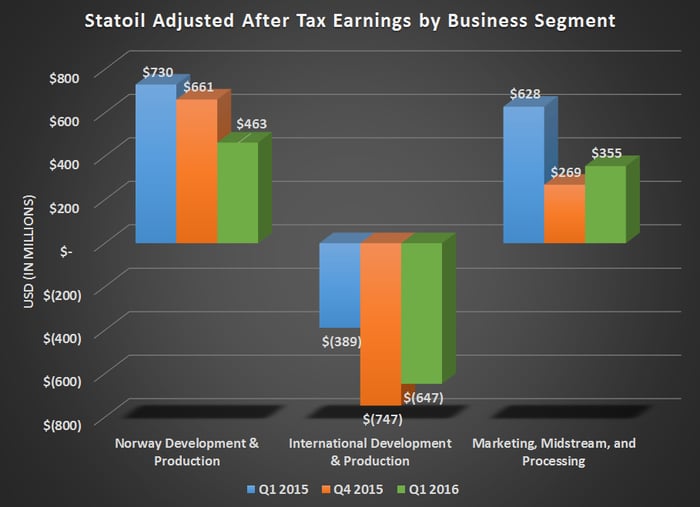 **Financial results prior to Q1 2016 are reported in Norwegian krone, and figures for this chart were converted at the current exchange rate of 1 USD = 8.16 NOK. Source: Statoil investor presentations, author's chart.

One thing that may also throw investors off is looking at these results and the reported earnings per share for each quarter above. That's because in the first quarter of 2015 and the fourth quarter, the company took asset impairment charges of $3.83 billion and $1.79 billion, respectively. Without these charges in the most recent quarter, it was able to turn back into the black.

What management had to say
It's hard for CEOs in the oil & gas business to get excited about results as of late, and CEO Eldar Saetre was quick to point out the miserable operating environment today. However, he did go out of his way to talk about how the company is much more concerned about value over volume and is using this time to focus on lowering cost of production:

The industry is facing challenges. However, I am pleased to see progress consistent with the priorities we presented in February. We have a firm plan to improve efficiency and make faster and deeper cost reductions. We are radically improving our project break-evens and we are on track to reset costs and thereby impact the parameters that we can control.

Looking ahead
Statoil's quarter does give some indications that it's progressing with its cost-cutting plan by reducing total purchases by $1.8 billion. Last quarter, the company plans on using its new production to replace higher-cost sources and bring its average breakeven cost to below $50 a barrel by 2022. That's a ways out, though, so it will be worth watching this story for a long time to see if the company can actually execute on the plan.

10-second takeaway
After taking billions in writedowns in 2015, Statoil's earnings numbers are looking a little more promising. Management believes it can cut costs even further, which would help to maintain some modest level of profit until the market for oil and gas picks back up again. Ultimately, though, the company needs higher prices if it wants to meet both its capital spending and shareholder payouts. When that actually happens is anyone's guess.