Exelixis has potential for larger gains in the years ahead than Roche, but is it worth the risk?

Both Exelixis (EXEL -10.52%) and Roche (RHHBY 0.99%) develop targeted cancer therapies, but the similarities end there. Exelixis is has a market cap of roughly $1 billion and lost $170 million last year.

Roche is a pharma and diagnostics giant with a market cap of about $211 billion. Last year's profit of about $9 billion was below its high-water-mark of $12.8 billion set in 2013, but it is without a doubt profitable.

For a company as small as Exelixis, news suggesting something as simple as an extra $250 million in annual sales next year would send the stock screaming upwards. For Roche, news suggesting a top-line boost of the same amount hardly merits a press release.

Unfortunately for Exelixis investors, the opposite holds true as well. Any news suggesting it might not become profitable in the years ahead would send the send the stock plummeting. If Roche guided its revenue estimate for the year down by $250 million, the stock would hardly budge. With this risk-to-reward mind-set, let's look closer at both companies to see which is the better buy.

Exelixis won approval last November for its second program, Cotellic. It's another kinase inhibitor for use in combination with one of Roche's drugs, Zelboraf. The combination is limited to the treatment of a genetically defined group of advanced melanoma patients. Exelixis is entitled to a 50/50 split of profits and losses, and responsible for 25% of the U.S. salesforce. This means the $2 million in first-quarter U.S. Cotellic sales Roche recently announced will probably result in significant losses for Exelixis after expenses are taken into account. Luckily Exelixis' entitlement to double-digit royalties on Cotellic net-sales of about $9.2 million in the EU during the first-quarter will help offset the loss.

For Roche, first-quarter sales rose about 4% at a constant exchange rate to about $12.7 billion. Sales growth of its three top-selling products -- Rituxan, Herceptin, and Avastin -- has slowed low single-digits, but the three still produced combined sales of about $5.4 billion in the first quarter.

Pipeline focus
Exelixis' best chance to reach profitability is with Cometriq in advanced kidney cancer -- although the company has given it the commercial name Cabometyx for this indication.

The expansion to roughly 17,000 advanced kidney cancer patients in the U.S. and 37,000 globally should be a tremendous boost for the stock. I'm inclined to view the FDA's approval nearly two months ahead of an already shortened schedule -- the agency had previously granted Cabometyx a priority review -- as a vote of confidence.

While all hope for Exelixis falls on two drugs with three indications, Roche has one of the most exciting late-stage pipelines in the industry. This April, it won approval for, Venetoclax, a first-in-class therapy for genetically defined group of advanced patients with the most common form of leukemia.

While Venatoclax has blockbuster potential, it probably won't be the most exciting drug to emerge from Roche's pipeline even this year. Recently, the FDA granted immuno-oncology drug atezolizumab priority reviews for both advanced bladder, and advanced lung cancer indications. If approved, this drug could reach over $3 billion in annual sales.

However, the most exciting program in Roche's pipeline is multiple sclerosis hopeful Ocrevus, formerly ocrelizumab. This twice annual injection hits the sweet spot between safety and efficacy that made Biogen's multiple sclerosis blockbuster Tecfidera one of the most successful drug launches in recent memory. The company expects to file applications for both relapsing and primary progressive multiple sclerosis in the first half of the year. If approved, this could contribute $4 billion in annual sales within several years.

In the numbers
Clearly Roche has a lot more emerging from its enormous operations than Exelixis. With a market cap of just over $1 billion though, earning a significant share of the roughly 17,000 advanced kidney cancer patients in the U.S. could put the smaller company in the black. Earning a majority share in this space could lead to huge gains for shareholders, especially if Cotellic also becomes profitable. Unfortunately, both have a bumpy road ahead.

Exelixis isn't entering the advanced kidney cancer space uncontested. Superstar immuno-oncology therapy Opdivo from Bristol-Myers Squibb won approval for the same indication last November. It's still early, but Bristol claimed a 50% to 60% share of these patients as of February.

Bristol is stepping all over Exelixis' chances with Cotellic as well. The combination of Yervoy and Opdivo recently won approval for treatment of advanced melanoma patients regardless of their BRAF mutational status, while Cotellic is limited to patients with BRAF V600E or V600K mutation positive tumors specimens. This means oncologists can prescribe Bristol's combination without genotyping patient tumors.

Exelixis had better hope Cometriq/Cabometyx and Cotellic please the medical community and start churning out profits fast. Exelixis has over $300 million in convertible notes due over the next few years. Without significant profits to pay down those debts, investors opening a position at recent prices could face heavy losses they might never recover. 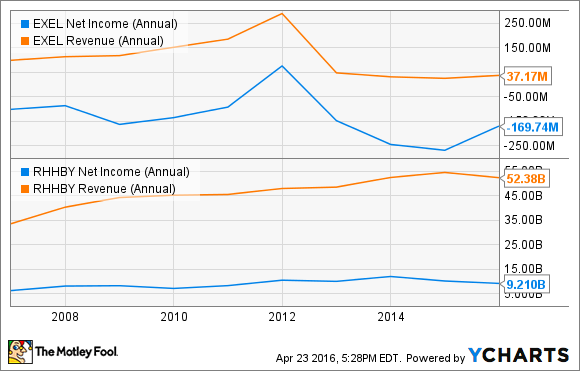 As for Roche, if all the above mentioned programs succeed, the stock, at recently depressed prices, would probably outperform the broad market. Investors can't expect gains anywhere near those theoretically possible with Exelixis. With top and bottom lines of this size, it's hard to move the needle, even with a blockbuster or two.

What I like about Roche, however, is that two or three of its most promising programs could flop and the losses to shareholders would be relatively minor. The stock is trading at a price that put it on my list of inexpensive healthcare stocks. It also made its 29th consecutive annual dividend increase (in Swiss Francs) last year. Even if a few of its more promising new drugs flop, at worst you'll receive an annual dividend of about $0.84 per share or a 2.6% yield (that will probably continue rising) for some years, maybe decades, until the company returns to growth.

That's a worst-case scenario I can live with -- and why I consider Roche a far better buy than Exelixis.