Its "Made in USA" days are numbered.

Stratasys' (SSYS 2.25%) MakerBot just can't catch a break. After dismal performance during the last year, the consumer 3D printing unit announced on Monday that it will no longer manufacture products at its central manufacturing facility in Brooklyn, New York. Stratasys has hired Jabil Circuit (JBL 1.18%) to manufacture MakerBot's 3D printers in Jabil's Chinese factories instead of manufacturing them in-house at one of Stratasys' U.S.-based facilities.

In a blog post written by MakerBot CEO Jonathan Jaglom, the move to outsource MakerBot's manufacturing is viewed as a way for the unit to remain competitive, keep up with strong expected future demand, and reduce its manufacturing costs by not having to maintain a manufacturing presence in New York City.

The migration is expected to take place in the coming months, and it remains unknown how many Brooklyn-based MakerBot employees will be laid off. MakerBot plans on retaining key personnel from its Brooklyn factory in the areas of logistics, repair, planning, quality, and operations.

It's tough out there
Between a significant reliability issue with MakerBot's Smart Extruder that plagued its fifth-generation Replicator 3D printing platform for an extended period, and fierce competition in the consumer 3D printing space, MakerBot's sales have plunged during the last year. Ultimately, the fallout forced Stratasys to write down MakerBot's value on three different occasions, totaling more than the unit's $403 million initial purchase price. 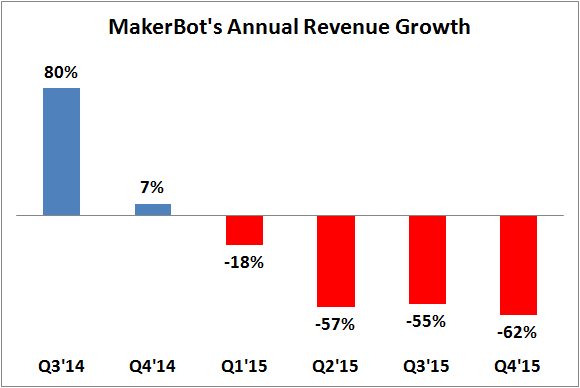 Outsourcing MakerBot's manufacturing to a manufacturing expert like Jabil, which has been in the manufacturing business for more than 50 years and boasts an impressive customer list, could be viewed as a positive development for the unit. After all, it allows MakerBot to adopt a variable manufacturing model that can scale up or down based on demand without bearing fixed costs associated with running a manufacturing facility, regardless of output.

An unfavorable glow
Last July, MakerBot doubled its manufacturing capacity in Brooklyn, and Jaglom said at the time that, "The launch of factory here today ... is just evidence to the fact that we expect and are committed to remaining here." Less than a year later, under Jaglom's leadership, MakerBot announced that it's moving its manufacturing overseas. The close timing of these two developments may cast MakerBot, which already suffered reputational damage from quality issues with its Smart Extruder, in an unfavorable light.

When questioned on the decision to abandon its manufacturing operations in Brooklyn, Jaglom told The Verge that other companies, like Apple, design products in the U.S., and manufacture them overseas. He also added, "If we play our cards right -- and I'm sure we are, we're doing a lot of great things here -- over time, the company will grow further, and through that growth we will bring more talent under our rooftop."

Here's the thing: MakerBot's sales haven't grown since the fourth quarter of 2014. In fact, MakerBot's sales have moved aggressively in the opposite direction of the industry, suggesting a much deeper-rooted issue with the brand. The auto populated results of the Google search term "MakerBot is" also suggests brand perception issues:

Warren Buffett once said, "It takes 20 years to build a reputation and five minutes to ruin it." The truth of the matter is that outsourcing MakerBot's manufacturing to a third party isn't going to fix what appear to be reputational issues. Outsourcing manufacturing may be a start in the right direction, but until MakerBot can deliver reliable and differentiated products – for a compelling price – don't count on MakerBot returning to greater glory anytime soon.

Steve Heller has no position in any stocks mentioned. The Motley Fool recommends Stratasys. Try any of our Foolish newsletter services free for 30 days. We Fools may not all hold the same opinions, but we all believe that considering a diverse range of insights makes us better investors. The Motley Fool has a disclosure policy.

Does Jabil Have a Secret Weapon?