Please ensure Javascript is enabled for purposes of website accessibility
Log In Help Join The Motley Fool
Free Article Join Over 1 Million Premium Members And Get More In-Depth Stock Guidance and Research
By Jay Yao - Apr 28, 2016 at 10:08AM

Although Chevron holds vast acreage over many promising basins and reservoirs, nowhere more is the company excited than in the Permian. Here are three reasons why.

Most investors think of Chevron (NYSE: CVX) as an integrated energy company with refineries, pipelines, and billion-dollar megaprojects that take years to come online. They don't think of Chevron as a major shale player.

Yet Chevron is one of the largest shale producers in the world. The company owns or leases millions of acres in aggregate in shale plays everywhere from Argentina's Vaca Muerta to Canada's Duvernay Shale. While Chevron holds vast acreage in many shale plays, nowhere more is Chevron excited about the company's shale prospects than in the Permian Basin. Here's why.

1. The Permian is cost-competitive
The Permian Basin is one of the most cost-competitive basins in the United States. Because of favorable geology, some parts of the basin, such as certain counties over the Wolfcamp or Spraberry, have breakevens of well below $35 per barrel. Other parts of the basin are cost-competitive in a way that net production in the Permian has actually increased from the beginning of the year rather than declined like in other basins because of the low crude prices.  Overall, 18 out of the 22 counties that cover the Permian have breakevens below $45 per barrel. 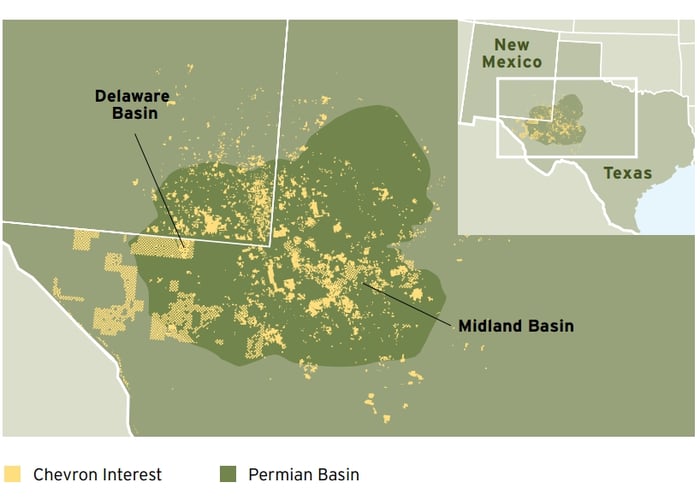 Because of its strong legacy position, 85% of Chevron's leases in the Permian have either no or low royalty payments. That gives Chevron a competitive advantage versus others and lowers its breakeven cost. Given its lower royalty costs, Chevron estimates that 1,300 of its Permian well locations can offer a 10% rate of return when WTI trades for $40 per barrel, 4,000 well locations can offer a 10% return at $50 per barrel, and 5,500 well locations can deliver a 10% return at $60 per barrel. The number of locations that can deliver acceptable rates of return will increase going forward as the previous economic figures reflect well counts for just 30% of Chevron's operated acreage in the basin.

Chevron's costs in the Permian have also declined as the company's expertise in shale and unconventional drilling have improved. Because of increased efficiency, the company's average horizontal well development cost in 2015 dropped 40% year over year. Assuming that oil service costs remain low, the lower cost trend should continue as the gap between Chevron's development cost per well and that of its more experienced competitors narrows.

2. The Permian has vast growth potential
For a big major like Chevron, it takes a lot to move the needle. The good news is that the Permian's resources are big enough even for Chevron. The company estimates that the company's leases of around 2 million net acres in the Permian Basin holds total potentially recoverable oil equivalent resources of 9 billion barrels, which, if all the resources were discovered and unlocked commercially, could power its current rate of production of 2.62 million BOE per day for over nine years. 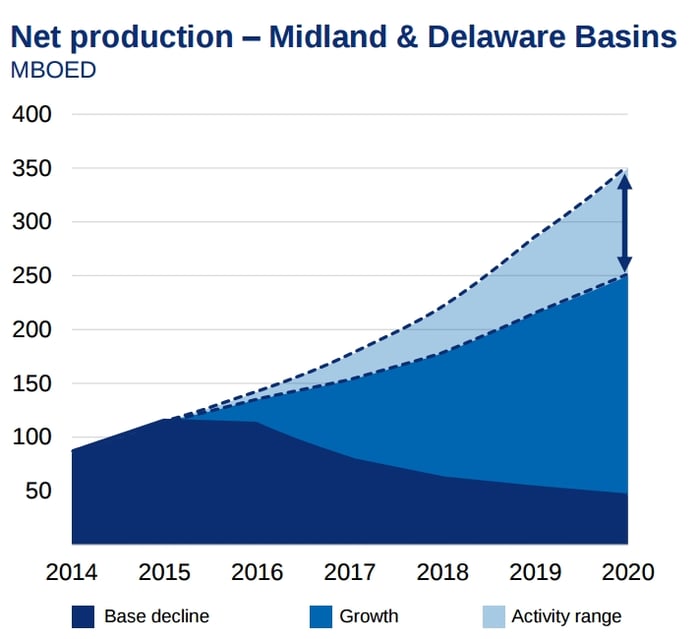 Overall, Chevron's production in the Permian grew 33% year over year to around 120,000 BOE per day, and management hopes to potentially triple that number by 2020.

3. Shale is flexible
Shale is short cycle. The time from initial drilling to production is substantially shorter than that of conventional projects. The shorter time to market has its advantages. In the past, Chevron has spent tens of billions of dollars on conventional megaprojects such as the Gorgon and the Wheatstone LNG facilities. When those projects' final investment decisions were made in 2009 and 2011, the outlook for their product, LNG, was bright, and the price for LNG was high. Many people thought that China, Japan, and South Korea, with little to no natural gas production of their own, would need LNG to power their economies. Because of the lower-than-expected growth in those markets and the low crude prices today, however, the supply and demand outlook for LNG is no longer as bright, and the return on investment for the Gorgon and Wheatstone will not be as great as previously expected because of the lower LNG prices that will cut Chevron's earnings on the spot market. There could also be financial risk to Chevron if some of the buyers of Gorgon and the Wheatstone LNG try to get out of their long-term contracts.

Because of shale's short ramp-up time and its fast decline rate, the time to market is short, and Chevron can avoid much of that economic change risk. When energy prices change, Chevron can ramp production up and down faster than it can with conventional projects and better preserve its balance sheet.

Investor takeaway
Chevron is committed to the Permian because of its growth potential. The company owns attractive acreage that could potentially hold billions of barrels of resources that might be unlocked commercially one day. Many of Chevron's well locations can yield an acceptable rate of return at current WTI prices, and the company's operations are improving every day as its employees learn new ways to become more efficient. The Permian's potential and Chevron's increased efficiency will translate to more profit and greater production down the road.