Please ensure Javascript is enabled for purposes of website accessibility
Log In Help Join The Motley Fool
Free Article Join Over 1 Million Premium Members And Get More In-Depth Stock Guidance and Research
By Sam Mattera - Apr 28, 2016 at 10:40AM

The payments giant isn't likely to earn a profit in the first quarter.

Payments giant Square (SQ -4.25%) will turn in its 2016 first-quarter earnings report on Thursday, May 5. Analysts expect the company to lose about $0.09 per share on sales of around $341 million. 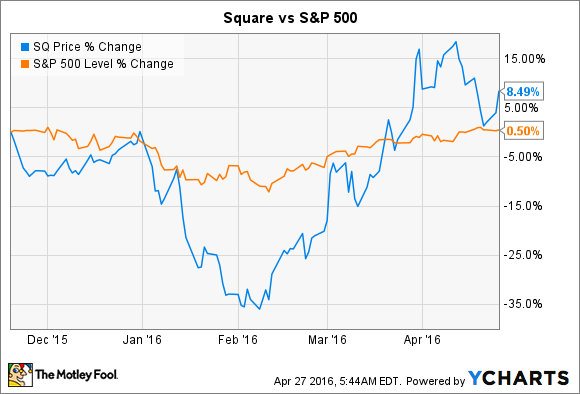 Since its public market debut last fall, Square has been a modest performer, rising just over 8%. But shares have been volatile: Square is up nearly 50% in the last three months. Stronger-than-expected sales or more modest losses could help Square maintain its momentum. Long-term shareholders, however, should focus their attention on several key trends affecting Square's business.

It's all about services
Square's core business centers around payment processing. Merchants, typically small business owners, use Square's mobile readers to accept credit card payments from their customers. Last quarter, Square's merchants generated $10.2 billion worth of transactions. Square took a 2.95% cut of those sales, netting $299 million of transaction revenue in the process. That represented nearly 80% of Square's total net revenue -- the overwhelming majority of its business.

Payment volume is still growing at a rapid rate: It rose 47% last quarter on an annual basis, and management is optimistic that it will continue to rise in the years ahead. But a more intriguing aspect of Square's business is the sale of ancillary products -- software and services it offers to its merchants alongside its credit card readers. Square offers several different services, and plans to bring more to the market over time. For now, there are four of note: Square Invoices, Instant Deposit, Caviar, and Square Capital. These services generated only a modest amount of revenue for Square last quarter (just over 5% of its total net revenue), but demand is growing rapidly -- sales jumped 52% on a sequential basis.

Over the long arc of time, these services could become the most appealing portion of Square's business, as the company's ecosystem eventually ensnares its sellers in a web of high-margin services. "...[W]hen I think about what will drive profitability for Square...It is the growth of the new products...particularly the software, Capital type product," CFO Sarah Friar said on the company's March earnings call.

Square Capital, in particular, which facilitates loans, appears well-poised to succeed. With its transactions data, Square can more accurately assess the creditworthiness of borrowers, and ensure collection when it processes additional payments. Any data Square's management offers up on Square Capital, or any of its other services, could be one of the major focal points of its earnings release.

Just how seasonal is Square's business?
In March, Square said it expected to generate adjusted revenue of between $132 million and $137 million this quarter. That would be roughly flat from the $135 million it generated last quarter. For some businesses, that would be fine, but Square is still a rapidly growing, somewhat speculative firm, and since it remains unprofitable, it needs to show strong growth to satisfy shareholders.

Square's management blamed the weak sequential outlook on a natural seasonality in its business. Square operates principally in the U.S., and the holiday shopping season directly affects the amount of transactions its merchant partners are processing. The fourth quarter then, is likely to be Square's strongest for the foreseeable future. But this is only Square's second quarterly report as a publicly traded firm, and its first first-quarter report. Investors should look for color on the seasonal trends management is seeing.

Attempting to dominate mobile payments
Credit cards remain alive and well, but some consumers are spurning plastic in favor of their smartphones. Square released its first contactless reader in December, giving merchants the ability to accept a variety of NFC-based payments, including Android Pay. In March, Square said it had received more than 350,000 pre-orders for its contactless reader, and planned to have them all fulfilled by the end of the first quarter.

"We want you to be able to associate [the Square logo] with the ability to pay with your phone," said CEO Jack Dorsey on the company's March earnings call.

Mobile payments have attracted a fair amount of interest, but remain in their infancy. Readers capable of accepting mobile payment solutions remain uncommon, and there's a fair amount of both merchant and consumer ignorance. Square believes the shift gives it an opportunity to capture additional share of the payment market. Investors should look for commentary on how this transition is progressing, and the demand that Square is seeing for its reader now that it's more widely available.

Swinging to profitability
Square wasn't profitable last quarter, and it doesn't expect to be profitable this quarter. But Square's management doesn't expect to lose money indefinitely. In March, the company said it could hit breakeven sometime this year (albeit on an adjusted basis). Square expects to post adjusted EBITDA of $6 million to $12 million for all of 2016 -- a notable improvement from 2015, when its adjusted EBITDA was a loss of $41 million.

Ultimately, achieving profitability will be key for Square's business in the long run. The state of this ongoing transition could be central to Square's earnings report.