Please ensure Javascript is enabled for purposes of website accessibility
Log In Help Join The Motley Fool
Free Article Join Over 1 Million Premium Members And Get More In-Depth Stock Guidance and Research
By Demitri Kalogeropoulos - Apr 29, 2016 at 11:08AM

Starz (STRZA) posted first-quarter results on April 28 that showed encouraging progress in its aims to replicate pieces of the streaming video strategy that has made Netflix (NFLX 1.56%) such a dominant force in TV. Hefty investments in original content boosted the brand and helped produce subscriber gains, but they also pulled earnings sharply lower.

What happened this quarter?
Starz's overall subscriber base grew sequentially, but fell year-over-year thanks to a drop in Encore members that offset a slight gain at the Starz networks. Highlights of the quarter include:

What management had to say
"Starz continued to execute against our growth strategy," CEO Chris Albrecht said in a press release. The evidence of that execution included setting new viewership records for the premier of the second season of Outlander while building a strong audience for The Girlfriend Experience, he said. 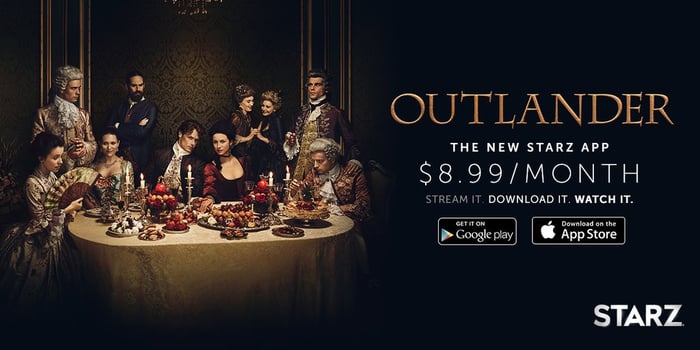 Albrecht told investors that the company's offering was bolstered by its just-released streaming video app. The new service "positions STARZ as the only premium pay TV app in the market with both streaming and download functionality," he explained. Netflix notably doesn't allow offline viewing, but CEO Reed Hastings has said the company is considering adding that feature.

Summing up Starz's latest initiatives, Albrecht explained, "These strategic moves created a powerful combination of premium pay TV movie and original programming, better positioning us to work with our core distributors to tap into the STARZ ENCORE households that do not subscribe to STARZ."

Looking forward
Starz has made a number of recent changes that the company hopes will put it on a faster growth trajectory – everything from a subscription-selling partnership with Amazon's streaming service, to spending heavily on original content, to launching its own TV Everywhere app.

So far, shareholders have seen the financial costs of these moves in the form of declining profitability and negative cash flow. There isn't much that management can point to in terms of strong subscriber growth, though. However, if all goes to plan, those bets will pay off through a climbing membership base and, eventually, higher subscription prices.