The company missed analyst estimates, but the number of subscribers increased.

What: Shares of Starz (STRZA) jumped on Friday following the company's first-quarter report. While the company missed analyst estimates for both revenue and earnings, a beaten-down stock price and subscriber gains could be contributing to the stock's rise. At 2:50 p.m. EST, shares of Starz were up 10%.

So what: Starz reported quarterly revenue of $431.9 million, down 4% year over year, and $3.7 million below the average analyst estimate. Starz Networks revenue rose 2%, to $339.9 million, due to rate increases, while Starz Distribution revenue sank 15%, to $92.7 million. This decline was mostly due to the licensing of Original Series titles to Netflix and Amazon in the first quarter of 2015.

Starz reported EPS of $0.65, down from $0.80 during the prior-year period, and $0.03 lower than analysts were expecting. Lower revenue and higher operating costs drove Starz's earnings lower, while share buybacks during the past year gave per-share numbers a small boost.

Now what: While Starz's results weren't particularly good, the stock has been beaten down during the past year. Even after Friday's rise, shares have declined by nearly 30%, so this may be a case of pessimism driving the stock too low. A new streaming service that launched early this month, priced at $8.99 per month, could also be a factor. 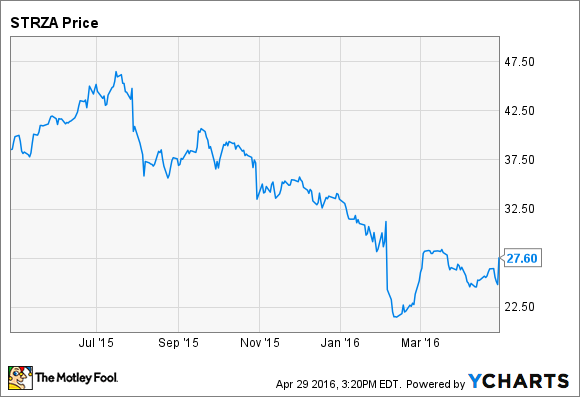 Early in the second quarter, Starz introduced an exciting way for consumers to access our premium brands by launching a digital retail service and TV Everywhere offering that positions STARZ as the only premium pay TV app in the market with both streaming and download functionality. We also successfully launched a new STARZ master brand strategy, repositioning the ENCORE suite of channels under STARZ and introducing them as the STARZ ENCORE networks. These strategic moves created a powerful combination of premium pay TV movie and original programming, better positioning us to work with our core distributors to tap into the STARZ ENCORE households that do not subscribe to STARZ.