In the Internet of Things (IoT), formerly unconnected devices are wirelessly linked to the Internet so that they can report and collect data or automate systems. It's fairly clear that the IoT will soon be a multitrillion-dollar business, with estimates of its size reaching $11 trillion to $19 trillion a year by 2025, according to McKinsey and Cisco.

And one of the most important industries for IoT is the automotive market. Connected cars, autonomous driving systems, artificial intelligence, cloud computing, and a host of other technologies are driving huge changes for carmakers, and the IoT has a hand in them all.

By 2020, consultancy Gartner estimates that nearly 250 million cars will be connected to the Internet, and PriceWaterhouseCooper forecasts that the connected car market will be worth $149 billion by that year.

Let's take a quick look at three major changes, both technological and functional, that the IoT will bring fairly soon for car companies:

Most carmakers are at least dabbling, if not directly tackling, semi-autonomous and autonomous vehicles. Advancements in sensors, on-board computers, cameras, and LIDAR (like radar, but with lasers!) have allowed automakers like Tesla Motors (NASDAQ:TSLA) to become a dominant force in this growing segment.

Tesla's Autopilot feature is one of the most advanced semi-autonomous systems on the road, allowing the company's vehicles to accelerate, decelerate, change lanes, merge with traffic, and overtake cars on their own. And the company's recently added "summon" feature allows the Model S to move itself in and out of parking spaces and garages, without the owner behind the wheel. 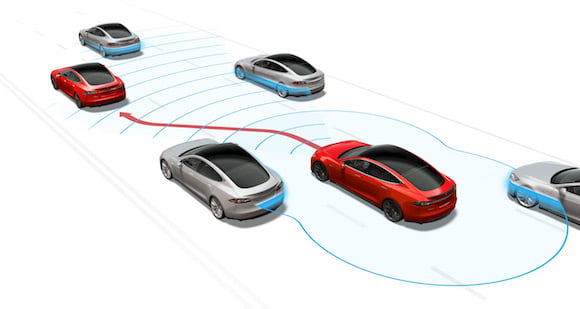 But the IoT will take this even further by pairing on-board autonomous driving systems with powerful cloud computing technology. Chipmaker NVIDIA (NASDAQ:NVDA) recently released its DGX-1 supercomputer, that has the about same processing power as 250 x86 servers. The company says that when the supercomputer is paired with its Drive PX 2 on board autonomous system, it'll bring deep learning artificial intelligence (which can learn more and adapt faster) to cars in ways current systems can't match.

If you think Tesla's technology is impressive now, wait five or 10 more years until its linked to cloud-based, artificially intelligent supercomputers. Connected car then won't  simply be ones that have 4G LTE connections so we can stream videos on the way to Nana's house -- it will mean cars that are smarter than we ever imagined.

Here's a quote from a recent Deloitte University Press report on the future of car technology: "Automakers fear that, should they lose control of the customer to software providers, cars could become commodity devices secondary to the software they run."

And that's exactly right. Apple is rumored to be working on its own car, codenamed Project Titan, and is looking for carmakers to build the vehicle. Apple was in talks with Daimler and BMW to manufacture the car, but those discussions have reportedly fallen apart because Apple wanted complete control over customer data.

As operating systems become a larger part of vehicles (think Android Auto and CarPlay, times 10) carmakers could lose even more control. Google has already built its own prototype driverless car, seemingly sidestepping the traditional auto industry players altogether in pursuit of its plans.

Fiat Chrysler (NYSE:FCAU) learned that the hard way last year, after it had to recall 1.4 million of its vehicles to fix a software security flaw that would have allowed hackers to takeover Jeep Cherokees.

The hackers who demonstrated the flaw were able to remotely control the Jeep's engine (turning it on or off at will), accelerator, and braking when they wanted, and adjusting the stereo and other internal electronic features.

Fortunately those hackers were just researchers, but Chrysler was forced to issue vehicle owners the software fix on USB drives. The cumbersome and costly nature of that solution has convinced carmakers to invest more heavily in developing over-the-air (OTA) software update systems that will eventually allow carmakers save both time and money on vehicle software fixes and updates. ABI Research estimates that about one-third of current recalls are for problems that could be fixed with OTA updates, at a savings that would have equaled about $6 billion last year. And IHS Automotive estimates that OTA updates will save carmakers $35 billion in 2022.

Think of all the updates your smartphone, tablet and computer receive for their operating system and apps. Now, imagine your car has just as much software running on it, and it's charge of getting you from Point A to Point B in one piece.

That's the future of carmakers, and so far, only Tesla has really jumped into it head on. The company has already made a handful of major performance, safety, and semi-autonomous upgrades to its vehicles via OTA updates.

3. It will open up new areas for revenue
As noted above, in just four years, it's expected that more than 250 million vehicles will be connected to the Internet, and that could result in new revenue streams for carmakers.

Take Tesla's semi-autonomous Autopilot feature as an example. Right now, Model S owners can add the feature for $2,500 when they order the vehicle, or they can pay $3,000 to upgrade later. The OTA update system allows for easy additional software purchases after buyers drive their cars off the lot.

Right now, the average U.S. consumer buying a new car spends about $33,000 for it, and keeps it for about 6.5 years. Dealerships then make additional money through servicing the vehicle, but there aren't many updates or changes to it after you drive it off the lot.

That will no longer be the case soon. As more cars are connected to the Internet, they'll be able to get new features -- for a price -- and those available new updates will encourage owners to spend more money on their cars in ways they couldn't before.

And as cars become more autonomous, Morgan Stanley believes that too, will open up even more ways for carmakers to earn additional revenues.

"With the ability of the car to drive itself, that time can now be redirected to other pursuits, potentially creating a new revenue stream if the content can be monetized. In a way, this is a content provider's dream. Short of air travel, there are few other opportunities to have a captive audience for several hours at a time."

The report went on to say, "Selling content to the occupants of the car (who now have nothing else to do) could be a significant new revenue stream."

So how much could this bring in? Navigant Research believes that automakers could add up to $21.7 billion annually in alternative services revenue, from things like car sharing and other services, by 2023.

Not all of that additional revenue will come from in-car entertainment or add-on features through OTA updates, but the estimate is a good indicator of the growing potential for IoT-connected autos.

Foolish thoughts
Naturally, the Internet of Things will also bring to the automotive industry changes that we can't predict yet. But IoT is already influencing how carmakers build their vehicles and how they think of the future of their products. That influence is only going to deepen as more connected cars come online, and as consumers continue to demand more technology in their vehicles.

Investors looking for ways to benefit from these changes need look no further than the companies that are already incorporating IoT into their vehicles. Tesla is certainly the best example right now, but I'm confident other automakers will follow suit soon. They simply don't have a choice.