REITs aren't like other stocks, and here's what makes them so different.

Real estate investment trust, or REITs, can be excellent investments for both growth and income. However, REITs aren't like other kinds of stocks -- they have different valuation metrics, distributions are taxed differently, and there are rules that dictate their dividend payments. Here's what you need to know about each of these three characteristics before buying your first REIT.

Matt Frankel: One fact you need to know about REITs is how to properly determine their valuation. Specifically, some typical metrics like earnings per share and net income aren't useful.

When companies calculate their net income, they are allowed to depreciate the assets they own over a certain number of years, in order to spread out the expense. For example, if a $100,000 piece of equipment is expected to last 10 years, the company can deduct $10,000 per year from their income to compensate for their equipment losing value.

However, the assets of a REIT are properties. And, as we know, the value of real estate doesn't generally go down over time -- in fact, the exact opposite is usually true. So, while there is usually a massive depreciation expense counted against a REIT's net income, it's not really an expense at all.

For that reason, we use a metric called "funds from operations", or FFO, which adds back in the depreciation expense and makes a few other smaller adjustments in order to provide a more accurate picture of the REIT's profitability.

As an example, consider apartment REIT Equity Residential (EQR -0.57%). For 2015, Equity reported earnings of $2.36 per share, which translates to a P/E multiple of 30.2, which looks deceptively expensive. On the other hand, Equity's FFO of $3.48 per share corresponds to a P/FFO multiple of 20.5, which looks much more reasonable.

Sean Williams: For investors, real estate investment trusts are often attractive because of their dividend yields. Because REITs themselves get preferential tax treatment for returning 90% or more of their profits to their unitholders, they typically get to keep more of their profit. This translates into yields that are often well above the average yield of the S&P 500, which is a bit above 2%. For instance, Annaly Capital Management in the mortgage-REIT industry has averaged a dividend yield of around 10% over the past 15 years. Even with a stagnant stock price, a yield like that can double a unitholder's investment every seven years.

But, REITs may offer a unique tax advantage to investors as well -- and it's one that wealthier individuals and retirees regularly try to take advantage of.

Although most REIT dividend payments are taxed like a  traditional dividend from a regular business, some aren't. Based on the way REITs recognize the depreciation and accelerated depreciation of assets, a portion of your dividend may become a nontaxable return of income. This is treated as a return of capital to the unitholder, which reduces their cost basis. The unitholder only becomes responsible for paying capital gains taxes on the difference between their sale price and their cost basis when they sell. Furthermore, because of asset depreciation and other expenses claimed by REITs, it's possible the amount you'll pay in taxes could be even lower than you expected. Talk to a tax-planning professional to see if your REIT dividend payments qualify.

This ability to be paid an above-average yield, as well as potentially keep more of your capital gains, is one reason REITs are such an attractive option to retirees.

Brian Feroldi: One neat fact to know about REITs is that they are required by the SEC to pay out at least 90% of their taxable income to shareholders in the form of dividends. That fact is a major reason why REITs tend to be some of the highest-yielding investments on the market, as the law prevents them from retaining profits to fund their growth.

Perhaps you're wondering how a REIT can grow if it is not allowed to invest in new properties with its profits. Well, REITs tend to rely on the capital markets in order to buy or build new properties as they primarily raise money by selling shares on the markets or by taking on debt.

This formula works great when the markets are in a good mood, but the strategy can come apart at the seams when the markets take a tumble. After all, if the REIT is counting on issuing new shares to fund its growth, then it can really hurt it when its stock price tumbles, as the REIT would need to sell far more shares in order to raise the same amount of capital.

This very situation is at play with a REIT that I own called STAG Industrial (STAG -0.62%). The company has grown its portfolio of assets by more than 300% since its IPO in 2011 from a combination of common share offerings and raising debt. 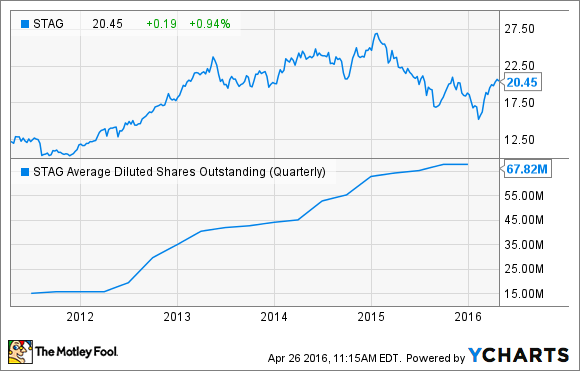 However, the company's stock started to fall in early 2015, which has made issuing new shares an unattractive method for raising capital. That has forced STAG to look at alternative methods of raising capital like selling under-performing buildings or leaning more heavily on the debt and preferred markets until the markets bid up its shares again.

This can make investing in REITs a bit of a double-edged sword, as while they do offer juicy yields, they are also far more reliant on the the capital markets working properly in order for them to grow. For that reason, investors need to be picky about which REITs they choose to invest in.