As a longtime Ford Motor Company (NYSE:F) shareholder, it was great to see an excellent first-quarter result from Detroit's second-largest automaker -- especially after the market had sold off the company, and the entire industry, because of "peak auto sales" concerns. Ford's pre-tax automotive sector results jumped 155% to $3.3 billion in the first quarter. It posted strong gains in the Europe and Asia-Pacific regions, and it rode strong profitability here in North America to set a record for quarterly profits. Not a bad day's work.

However, what I'm arguably the happiest about is what I was wrong about: that a rise in fleet sales would pressure margins. Here's what happened.

Fleet woes, no more?
I've long said that not all fleet sales are bad news, despite many believing that any fleet sale is a margin killer, since that was the case long ago. The way it breaks down is pretty simple: Ford's fleet sales fall into three different categories: commercial, government and daily rental. The first two segments are very profitable business; it's the daily rental sales that are typically seen as less desirable.

For that reason, I was a bit concerned heading into Ford's first quarter, because over the past three months, Ford's fleet sales had spiked compared to the prior year. Moreover, that spike was driven by daily rental fleet sales. Consider that Ford's first-quarter fleet sales accounted for 36% of its total sales in North America, up from last year's 29%. Not only that, but daily rental sales accounted for 17 percentage points of that 36%, a significant jump from representing only 11 percentage points of last year's 29%.

Not only were Ford's fleet sales increasing, but it was happening at a time when crosstown rival General Motors (NYSE:GM) was approaching the situation with the opposite strategy. Consider that only 21.5% of GM's first-quarter sales were generated from fleet channels. Furthermore, the two historically healthier fleet channels, commercial and government, increased sales by 9% and 23%, respectively, while GM's daily rental sales plunged 36%.

With all of that in mind, it was plausible, in my opinion, that the jump in Ford's less desirable fleet sales could have a near-term negative impact on Ford's margins before recovering in the second half of 2016. I was wrong -- very wrong.

Would you look at that!
Naturally, after I discussed that topic publicly, Ford decided to serve me a plate of humble pie Thursday with its first-quarter data. Not only was there zero decline in Ford's North America operating margins, there was a huge improvement. Operating margin moved from 7.8% during last year's first quarter all the way up to 12.9% -- a staggering 510-basis-point jump. While part of that improvement was thanks to a weaker comparison from last year's first quarter, due to the slower launch of the new F-Series truck, 12.9% was still an extremely strong operating margin for the automotive industry, and it even topped recent years when Ford had posted some of its healthiest results in a decade. 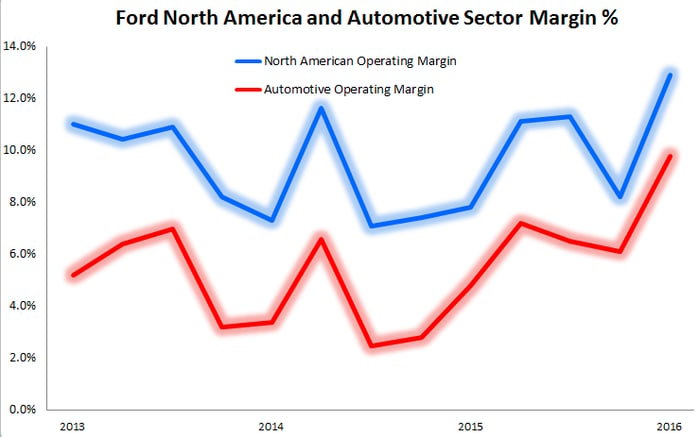 Chart by author. Data source: Ford's quarterly presentations. Figures may not reflect adjustments made by Ford at later dates.

Furthermore, despite Ford generating more of its sales from fleet channels than GM, the latter's North America EBIT-adjusted margin checked in much lower, at 8.7%. Now, there are many, many factors to consider, such as GM's lower margin being primarily due to restructuring costs and launch costs for upcoming products -- factors that might not currently be impacting Ford to the same extent.

Ultimately, though, thinking fleet sales would hinder Ford's margins and help GM boost its own margins in North America appears to be false. Or, at the very least, the impact fleet sales now have on margins is nil, or far less than it used to be. Perhaps, finally, it's time investors stop considering fleet sales as akin to the devil -- because Ford just proved that to be incorrect.