Please ensure Javascript is enabled for purposes of website accessibility
Log In Help Join The Motley Fool
Free Article Join Over 1 Million Premium Members And Get More In-Depth Stock Guidance and Research
By Chris Neiger - Apr 30, 2016 at 6:42AM

These two companies are leaders in the graphics processing market, but only NVIDIA is making huge gains.

Take a look at their stock prices over the past 12 months: 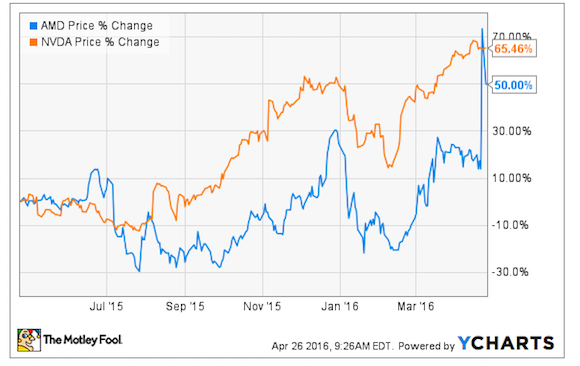 NVIDIA has focused its attention on how best to use its GPU skills in new markets, and it appears to be paying off. In fiscal Q4 2016, the company's revenue hit a record high of $1.4 billion and for the full fiscal 2015, an increase of 12% year over year. Meanwhile, AMD's Q1 2016 revenues were $832 million, falling 19% year over year.

It's not just NVIDIA's revenues that are outpacing AMD's -- it's also its GPU market share. A few years ago, NVIDIA held 64% of the discrete desktop GPU market share and AMD took about 36%. But over the past few years, NVIDIA has started to make more gains, rising to over 76%, while AMD has fallen to below 24%.

Part of NVIDIA's rise comes from the expansion of its GPU expertise. The company not only uses its GPUs in desktops but in computers for driverless cars and virtual reality (VR) as well. The company's GeForce GTX 970 and 980 GPUs are the leading graphics processors for computers that can run high-end VR headsets like the Oculus Rift and HTC Vive.

The VR-ready desktop market is still very niche right now, representing about 1% of all PCs on the market. By 2018, though, there are expected to be about 171 million VR users worldwide, and the market size will grow to $70 billion by 2020.

NVIDIA is also using its Tesla graphics processors to help power its new DGX-1 supercomputer. The server will be used for a variety of high-powered calculations, including crunching data for driverless cars from the cloud.

To its credit, some of AMD's latest Radeon GPUs are in several VR-ready computers as well. The company is positioned to benefit from VR's growth just as NVIDIA is, but with its discrete GPU market share far behind NVIDIA's, AMD won't benefit to the same degree.

However, AMD is making some big gains with its server processors and recently announced a $293 million partnership with China's Tianjin Haiguang Advanced Technology Investment. That's an important win for AMD because of the growing Chinese server market.

AMD could also benefit from Intel's recent announcement that it'll be moving away from the PC market to higher growth segments. AMD may be able to gain some PC wins as Intel shifts directions, but it'll take some time to see if that really pays off.

So who wins?
Both companies clearly have their strong suits, but I think NVIDIA is a better buy right now because of the new market segments it's pursuing. There are projected to be 12 million driverless car sales annually by 2035, according to IHS Automotive, and NVIDIA's technology is helping to push that market forward in ways AMD just can't match.

Similarly, VR's growth over the coming years should bring in additional revenue for both companies, but NVIDIA's dominant position in GPU market share gives it the clear advantage in the space.

AMD may be expanding further into servers and PC processors, but just as Intel has shown, betting on the PC market is a losing battle. I think NVIDIA's pursuits have better long-term potential, and that's why I'd choose it right now.