Please ensure Javascript is enabled for purposes of website accessibility
Log In Help Join The Motley Fool
Free Article Join Over 1 Million Premium Members And Get More In-Depth Stock Guidance and Research
By Justin Loiseau - Apr 30, 2016 at 8:00AM

General Electric's renewable energy assets are bigger and better than ever before.

1. Top Lines Are Up
While the bottom line is obviously important, analyzing the top line is the best way to gauge demand. Orders are the most direct demand metric and, in Q1 2016, renewable energy orders increased a whopping 86%, excluding those that came in via GE's Alstom acquisition. With those added on, overall orders clocked in at $2 billion, a 110% jump from Q1 2015.

GE's order increase was also representative of rising revenue. Q1 2016 sales came in at $1.7 billion, up a seasonally adjusted 62% from 2015's first quarter.  Bottom-line profit also increased by a smaller but still substantial 45%.

General Electric shareholders should demand efficiency when it comes to translating top-line numbers into earnings for investors—but the renewable energy business is still focused on major growth, and a ballooning top line is good news no matter how you slice it.

2. Renewable Energy = Synergy and Diversity
During GE's earnings call, CEO Jeff Immelt made sure to reiterate that the renewable energy business is an essential piece of GE's larger plan and portfolio. Immelt noted that:

In addition, taking a dedicated look at Renewables is making us smarter and faster. We have massive potential to utilize the combined supply chain. Synergies were $100 million in the first quarter, on a path to $1.1 billion in the year.

All of this has occurred amidst a backdrop of major changes at GE HQ. General Electric announced a major pivot last year to shed its GE Capital business and double down on industrial expertise. That means more potential for cross-business synergies, and the renewables business is no different. As Immelt made sure to mention, organic orders grew 88% on the back of two new wind turbine product launches—that's 88% of orders that benefited from GE's cross-cutting R&D, manufacturing, and energy solutions services.

While synergy saves dollars, diversity ensures not all dollars come from the same place. Renewables currently account for 6.5% of GE's industry revenue and 2.5% of total profits, and both numbers represent a 50% rise from Q1 2015. At the same time as General Electric is "in the midst of a challenging Oil & Gas [unit] market," GE's Aviation and Power units continue to provide reliable profit.  All in all, Renewables enjoyed the most organic order growth of any unit.

3. Going Global
Alongside its earnings report, General Electric announced that it had reached a milestone 50,000 wind turbine installation count.  With the recent acquisition of Alstom, GE now lays installation claims to turbines in more than 35 countries around the world. 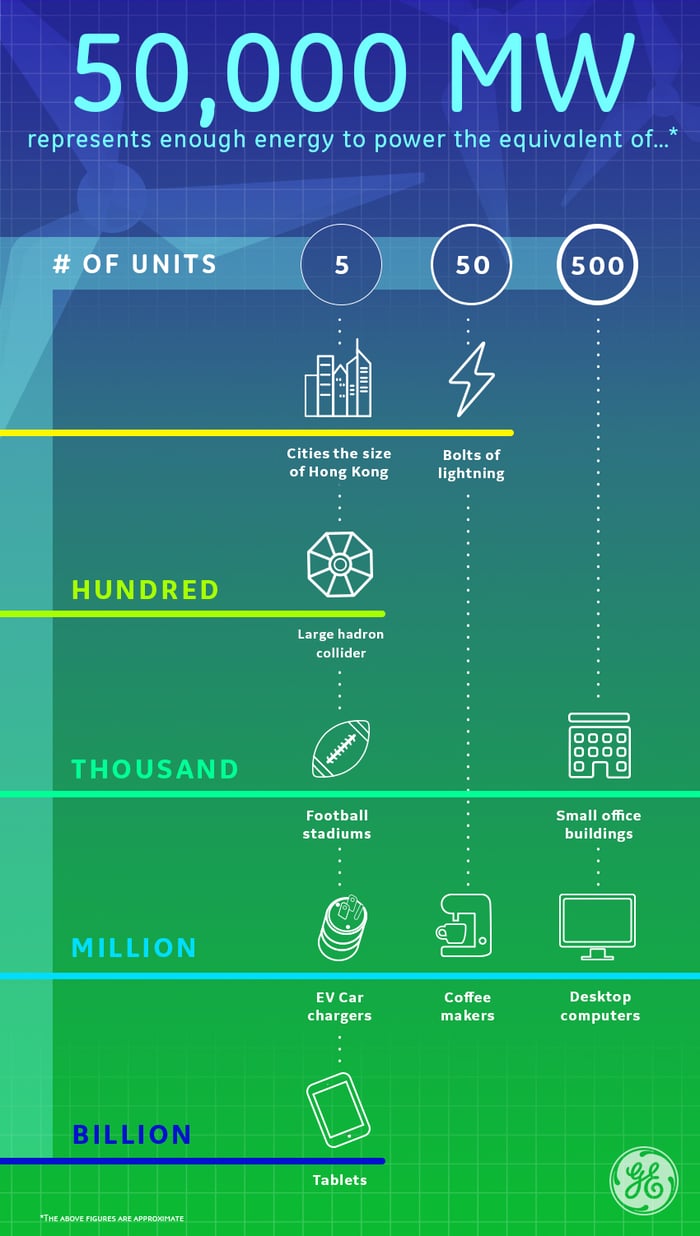 "Renewable energy has become a mainstream source of power generation," said Jérôme Pécresse, President & CEO of GE Renewable Energy, in a statement. "The industry is poised for continued global growth, and at GE, we are excited to be reaching this milestone and look forward to adding our next 50 gigawatts even faster."

Going global is another aspect of portfolio diversity, and can also open up new growth market opportunities. The United States makes up the largest piece of GE's wind portfolio, but the company has more recently increased installations in Europe, Asia, and Latin America. The Alstom acquisition also added on less-discussed hydroelectric orders in China and Laos.

General Electric is not a renewable energy company—its $27.8 billion  in sales for this past quarter came from entities as opposite as healthcare, oil, and appliances. But its renewable energy unit is paying off, and its increasingly important position in GE's portfolio is something investors should continue to recognize and analyze.